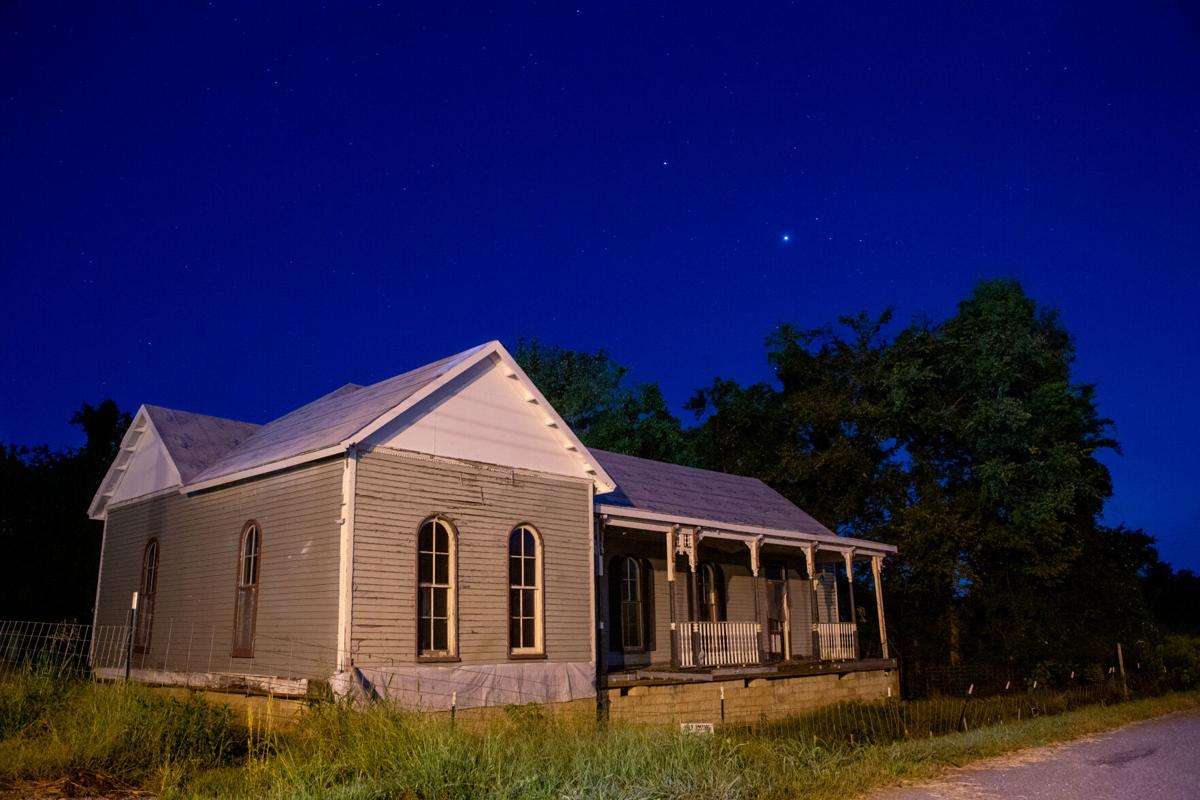 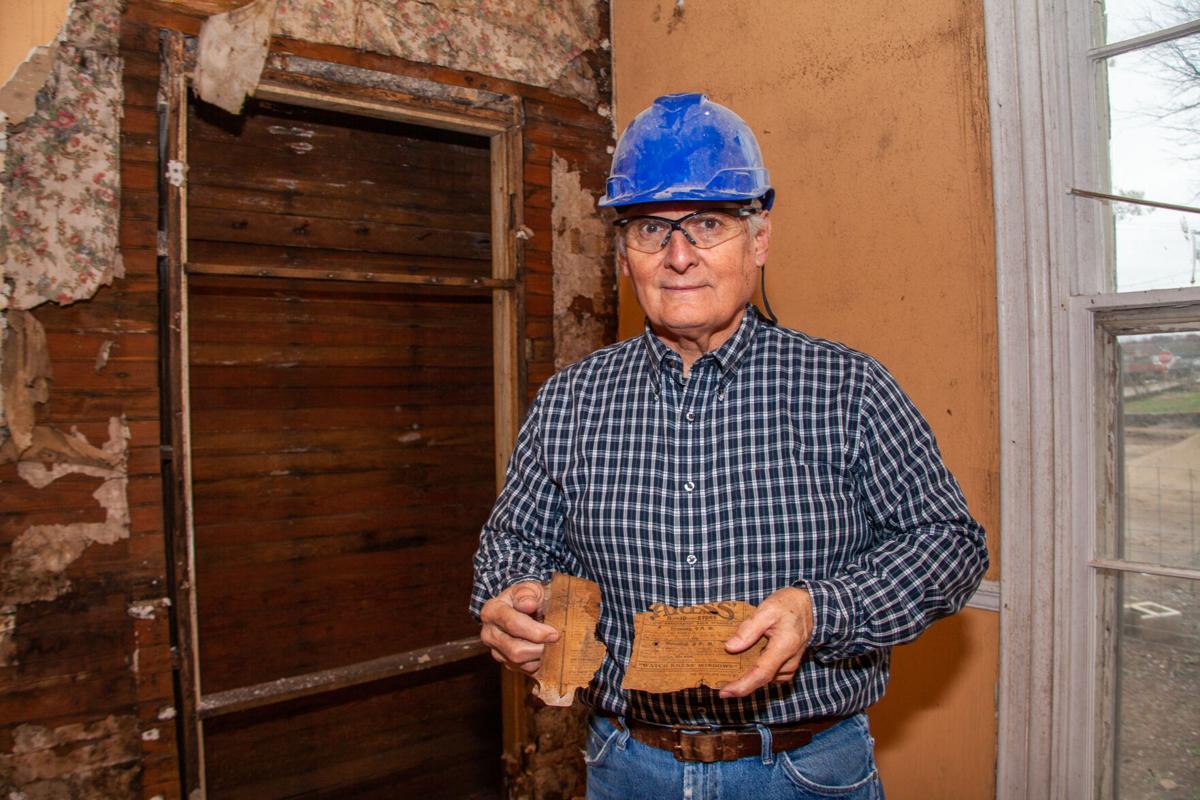 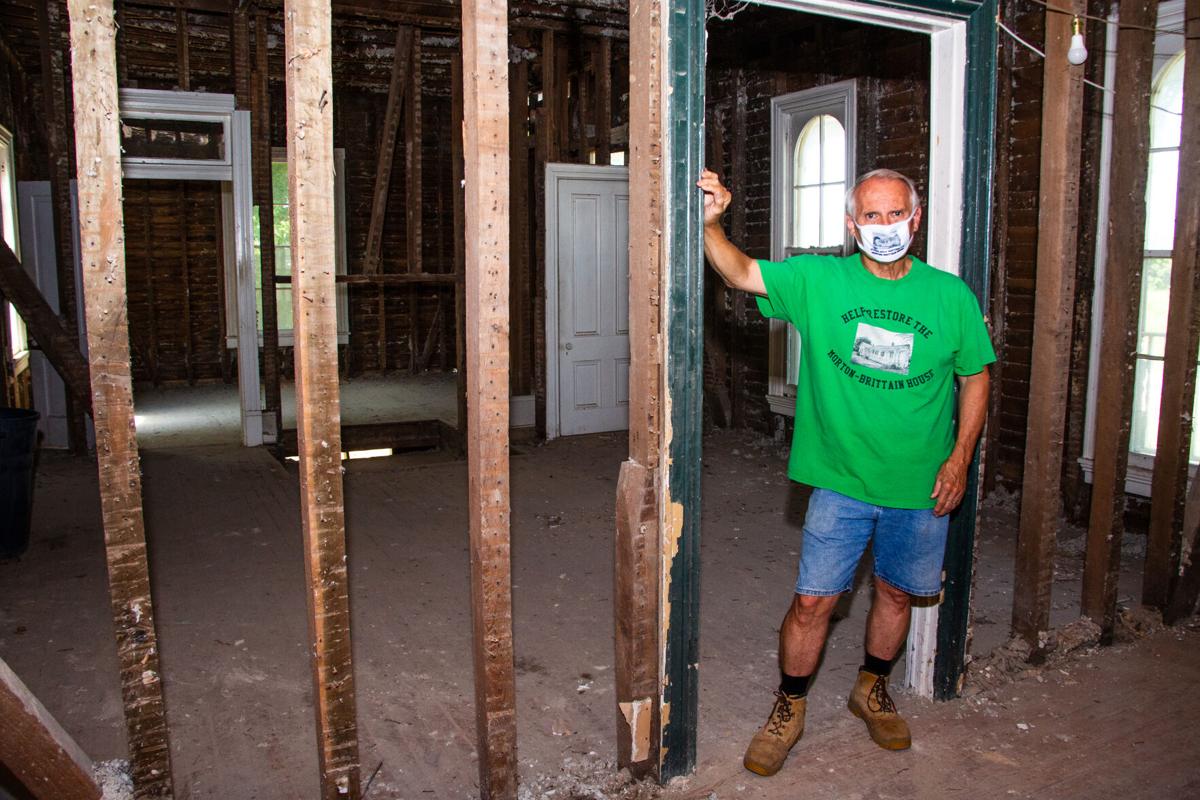 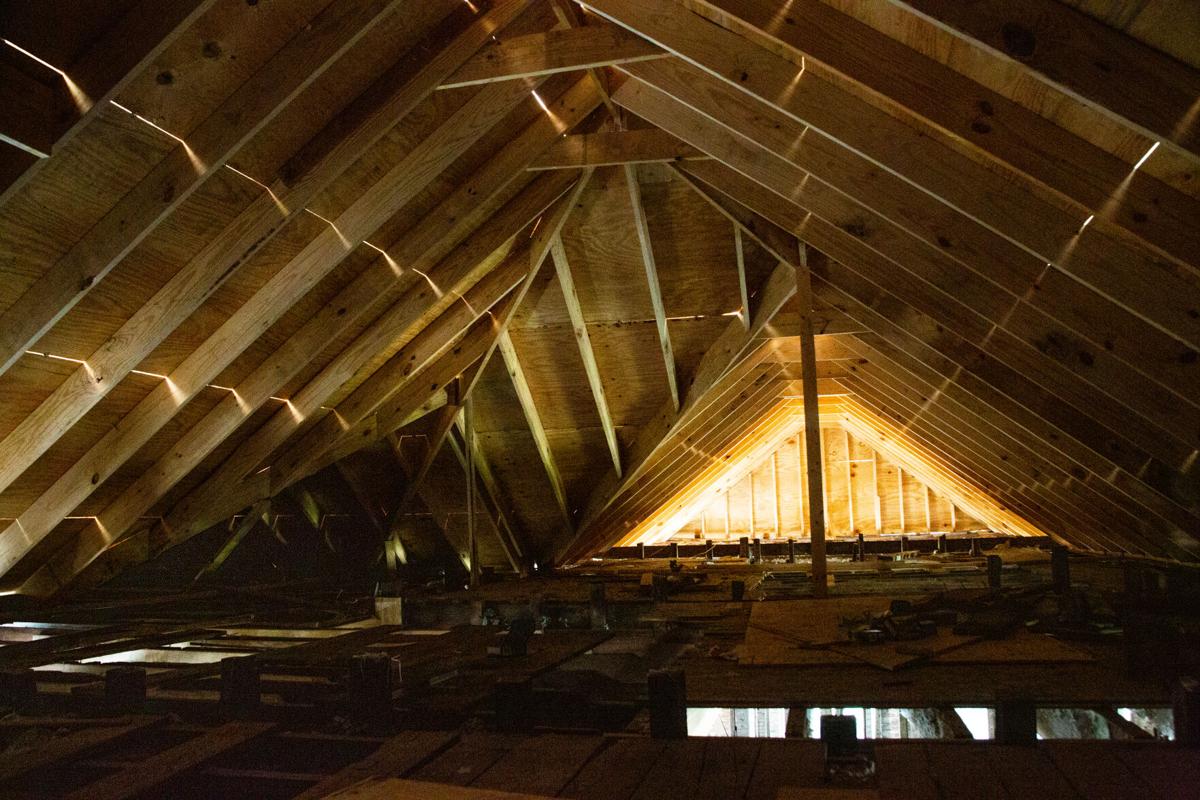 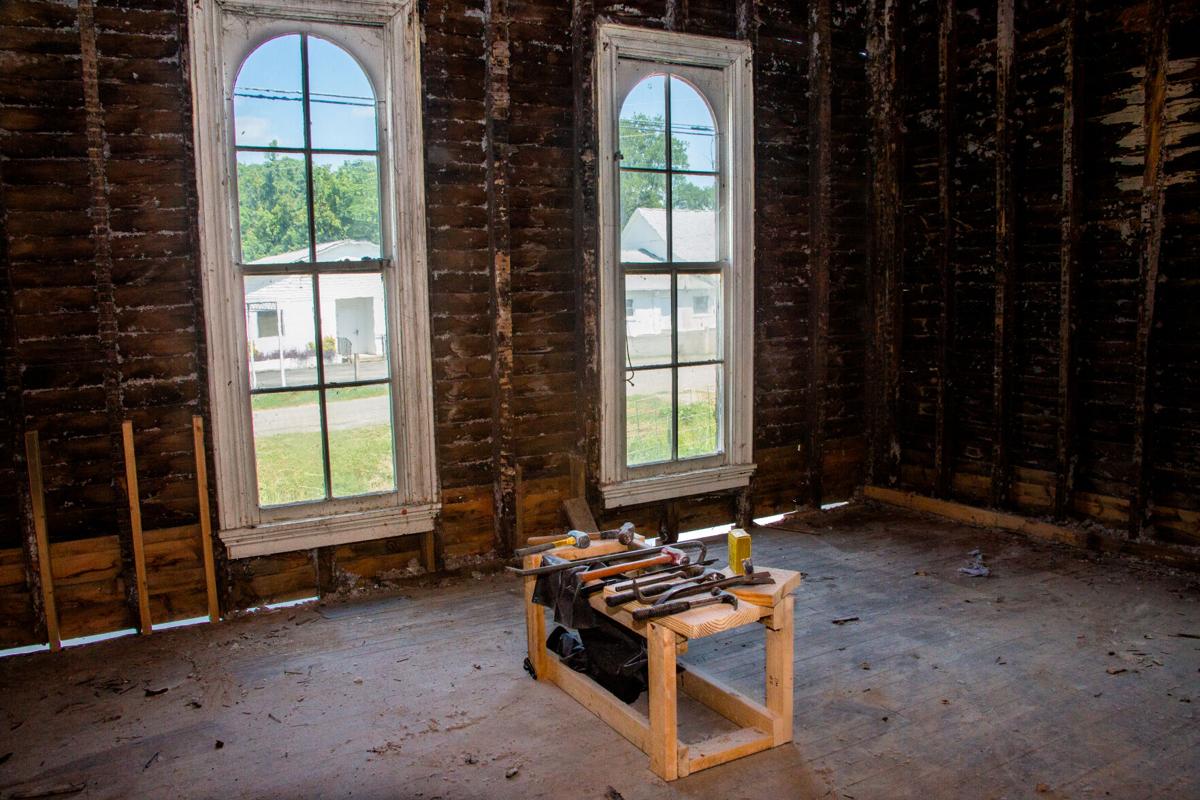 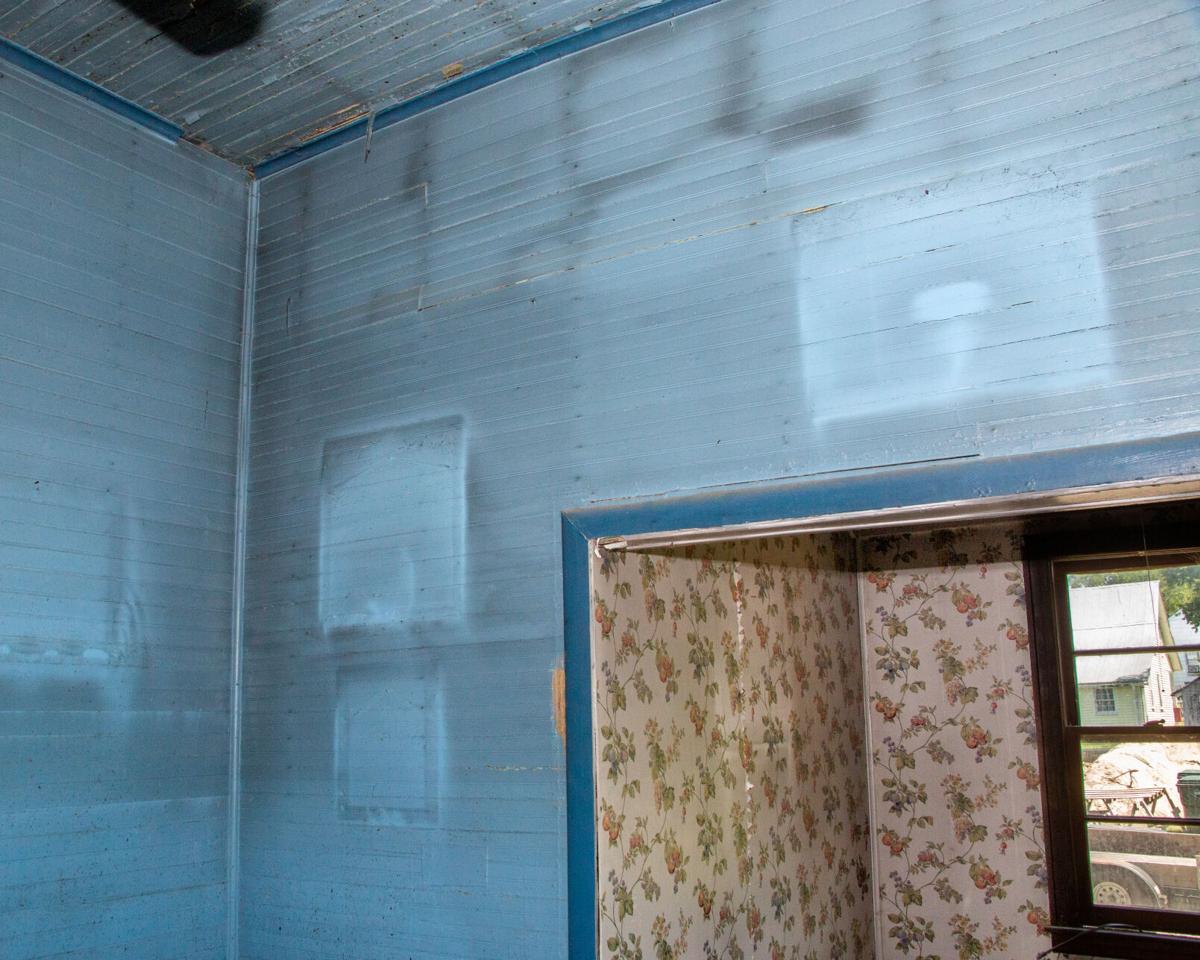 Nolensville’s historic Morton-Brittain House is the focus of an ongoing restoration effort that is serving as a reminder of the values of a small town that refuses to forget its history in the midst of unprecedented growth.

The 1870 home has settled into its new location on Sam Donald Court after it was moved in early 2019.

On its original plot on Sunset Road, it was at risk for demolition before it was saved by a group of people dedicated to preserving the past in rapidly growing Nolensville.

The project has been undertaken by a group of citizens and members of the Nolensville Historical Society, who formed a five-member non-profit committee aimed at breathing new life into the home that once served as one of the largest and grandest homes in Williamson County. It was first owned by George W. Mor

ton and later sold to James Brittain in 1882. On Feb. 4, 2019, the home was separated into three sections and was transported by truck to a new location across from Ebenezer United Methodist Church, and in January 2020 the house received its new roof, replacing a blue tarp that had been protecting the structure from the elements, especially the heavy rain that seemed unending throughout winter.

Nolensville resident, former mayor and current Williamson County Commissioner Beth Lothers also serves as the chair of the Morton-Brittain House Move & Restoration Committee. She said that the effort to save the house has become a project that continues to push forward through the challenges because of a community of people and businesses who have worked together to preserve history through volunteering to work construction or making monetary donations.

“It goes beyond whether or not if you pass by or interact with this historic building, it’s being preserved in our historic district and having that story continue and telling the small stories and the larger stories and how it relates to slavery at the time or this event in history,” Lothers said. “Anybody can create Disneyland, but this is Nolensville, and what made Nolensville were pioneering families who came over the Cumberland Gap, rolled up their sleeves, built a community.”

For Lothers, the work to save and restore the Morton-Brittain House is more than just a proj ect, but an emotional and spiritual connection to the past and an homage to one of her friends and heroes, Evelyn Gillespie Hyde Bennett. Bennett died in 2018 after serving as the president of the Nolensville Historical Society — she helped to preserve several historic buildings and helped to publish four historic journals about Nolensville.

“I watched this incredible woman who passed away at 90 years old, who lived this incredible life and who gave and loved a community down the road with the house, I rolled down the window and I yelled out the window, ‘This is for you, Evelyn,’ so this is very personal for me.”

The home was placed on the National Register of Historic Places in 1988, where it is registered as simply the George W. Morton House and described as having “a porch with original milled columns with fan brackets, milled spindled frieze and vergeboard. The main entrance has original double doors of arched single light and frame panels and original screen doors. Above the door is a single light arched transom. Windows are original arched four-over-four sash and some retain their original flutters. On the south bay of the main facade is a glass and frame door with a rectangular single light transom.”

Some of these features remain on the home to this day, but the 32 years since it was registered have taken its toll through weathering and the passage of time.

Some small pieces, such as the original screen door, were sold at an auction, but in an effort to continue to bring the house as close to its former glory as possible, Lothers said that the current owner of the door has agreed to return the screen door as donation for the project.

The 1988 documentation describes the interior of the home as having retained its “original Greek Revival influenced mantels with Doric motif columns, four panel doors with fluted molding and corner blocks, and chair-rails,” and while the home has been stripped of its water-damaged interior walls, the group plans to restore the home’s interior and exterior by recreating or referencing the original architecture and design as much as possible. And like any historic home, surprises continue to be uncovered as walls and ceilings are removed for inspection and cleaning before they’re reconstructed.

Surprises in the old structure

Project Manager Greg Bruss said that when they started stripping the structure down to its original 2,400-square-foot frame, they weren’t sure what they would find. For example, they aren’t quite sure why the empty closet, which has a matching closet that was in use in the same room, was covered up.

“You don’t have much storage space in these old buildings to begin with so why would you take a door off and lose a closet and cover it all up? Who knows,” Bruss said. “It’s just one of the home’s secrets.”

The home was originally built as a two-story structure, but was heavily damaged by a tornado in 1900 that destroyed the second story. The house was renovated at some point in the 1960s and has an added kitchen and side porch with a bathroom when indoor plumbing was installed.

In addition to the hidden closet, Bruss and his team have found a variety of construction methods that were used throughout the years including newspapers that were used along with an adhesive paste to patch the home together after the tornado.

Bruss spent years working on Habitat for Humanity projects, including working along side former President Jimmy Carter. He said that this is the biggest project that he and other members of the restoration effort have taken on, but one that is worth the years of work.

Bruss said that throughout the spring and summer he’s taken more than 10 tons of sheetrock, glass, plaster, wood and other debris from the home in preparation for the next steps — rebuilding the home’s three fireplaces and chimneys using some of the original bricks, insulating the building and shingling the roof.

Lothers and Bruss said that the huge undertaking has also been supported by groups like the Heritage Foundation and businesses, who have either donated goods and supplies or sold them at a large discount, after hearing about the passion and purpose of the project.

“It’s one thing to teach a kid about history, but when they can go up and touch a building or see it that’s just a whole different sensory,” Lothers said.

Fundraising has also taken place through the sale of artwork such as pen and ink illustrations by Chris Ousley that were framed with reclaimed wood from the home’s roof by Tom Ferris. In addition to artisan items, supporters have begun purchasing two-by-four pieces of wood and customizing them with drawings, signatures and other signs of support. These pieces will be installed in the inner walls of the building as a way for the people of the 21st century to leave their mark and say, ‘I was here,’ when the Morton-Brittain House was in need.

“This way you’re permanently a part of history in restoring this house in Nolensville,” Lothers said. “This can really bring people together.”

While the project was initially expected to be completed sometime between 2021 and 2022, COVID-19 as set back the project by about six months.

“All of our fundraisers just disappeared,” Bruss said.

Now the group has taken on fundraising by way of an online silent auction set for Oct. 5-11 to raise money for the project that they are determined to restore.

Bruss said that the auction already has more than 50 items that will be available for bidding including gift cards to some of Nolensville’s local favorites like Outlanders Southern Chicken, Pork Belly Farmhouse and Martin’s Bar-B-Que Joint; a one year membership to Wash 37135; an annual family membership for Williamson County Parks and Recreation; four adult passes to the Nashville Zoo and much more.

And despite the unknowns and challenges of 2020 and beyond, Bruss said that the project will continue in hopes of reminding Nolensville residents and visitors alike where they come from and what life used to be like in the Town of Nolensville.

“People moved to Nolensville because of what it is, but it only is what it is because of what it was. If we lose that history that got us to where we are today and how we got there, even in the building of houses and how they were structured, and how much of it is the same as what we do today, and how much is different, if we lose that then we lose our identity as a town,” Bruss said. “That’s what we’re trying to save.”

More information about the ongoing project to save the Morton-Brittain House can be found at nolensvillehistoricalsociety.org.