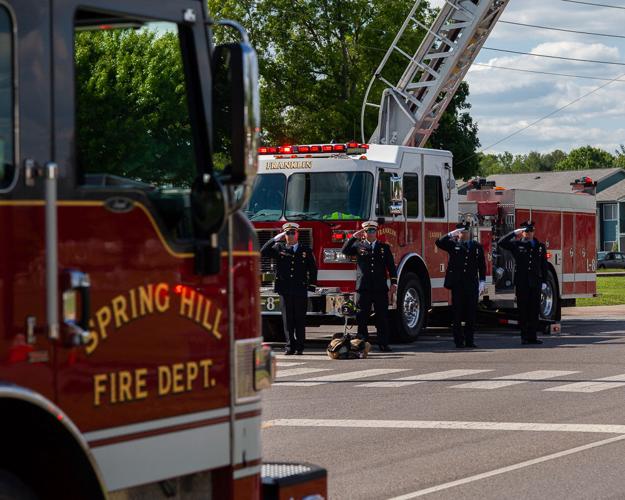 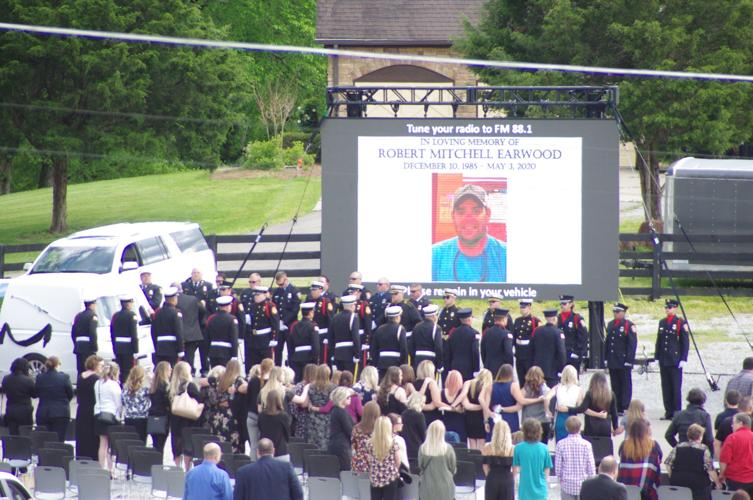 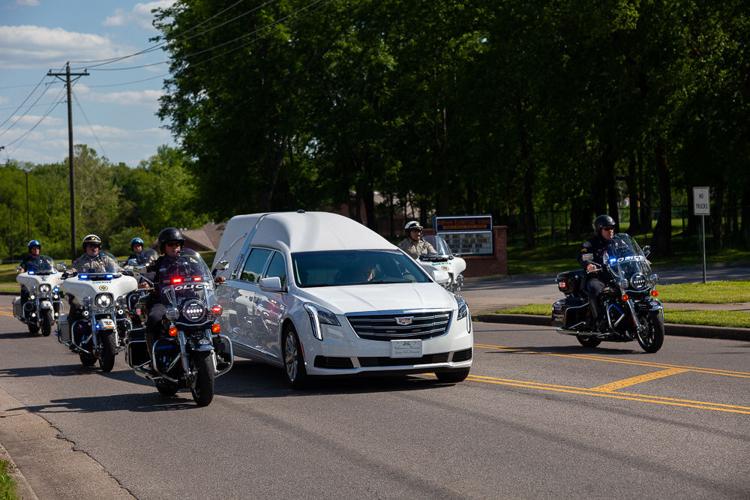 Police provide an escort during the funeral procession.

Lt. Mike Pinkerton of the Spring Hill Fire Department did his best to explain just how much Spring Hill firefighter Robert Mitchell Earwood meant to his department, his friends and his community.

“How [can] I put into words how good of a person Mitchell was? Then it occurred to me," Pinkerton said. "I don't have to explain to any of you how special Mitchell was — Mitchell had done that for himself.”

Pinkerton was just one of hundreds gathered at the Franklin Grace Chapel on Thursday to honor and remember Earwood, who was tragically killed during Sunday’s storm at the age of 35.

A graduate of Franklin High School, Earwood had served with the Spring Hill Fire Department since late 2008 and was also the department’s historian.

His father, Jerry Earwood, had also served with the Spring Hill Fire Department and was present at the funeral in full uniform.

“When Mitchell was hired on, he was assigned to my crew at Station 1,” Pinkerton said. “As Mitchell would say, 'that's Beechcroft!' I remember, when he was hired, I worked for Jerry and I was with him every day. We [were] eating lunch one day and Jerry said, 'I'm happy you all are working together, you can watch out for each other.' That made me proud to know that Jerry trusted me to lead his son.

“Until we meet again — I love you my brother.”

SHFD Assistant Chief Mike Bryan also spoke during the service and shared just how devastating a loss Earwood’s was.

“As I look out into the crowd and see all of these loving faces of the friends and family of our friend, and our brother...it's touching,” Bryan said.

“Now I'm going to keep it PG, but I got to say... this sucks. I make no apology for saying that. This is horrible, and I'm not trying to put a downer on it, I just want to say the reality of it. Our friend...we miss him.”

Bryan continued, reflecting on what he felt Earwood might have wanted those gathered at the church to do that Thursday: laugh.

“But what's cool about it is that we can stand up here and do exactly what he would want us to do,” Bryan said. “That guy, no matter what was going on, made you laugh and forget the hard times. That was his gift — one of them. Another one is that he could quietly work his way through this department, and through other departments.

Toward the end of the service, the song "The Heat Is On" by Glen Frey could be heard playing over the loudspeakers. Earwood’s twin sister, Mallory Earwood, reflected on the importance of that song and what it meant to them as siblings later that day in a social media post.

“The song 'The Heat Is On' was extra special to us siblings when we were little,” Mallory Earwood wrote.

“Mitch loved this homemade video with firefighters fighting fire with that song playing. He would watch it over and over. We all [sang] that song growing up. Even as recently as a couple months ago.

“That was one of the hardest parts. It flashed me back to my childhood when Mitch and I were basically connected at the hip. I will miss him every single day until I see him again. He loved and protected me so well! He was the best twin, the best brother, the best person! My angel! My guy! Always.”