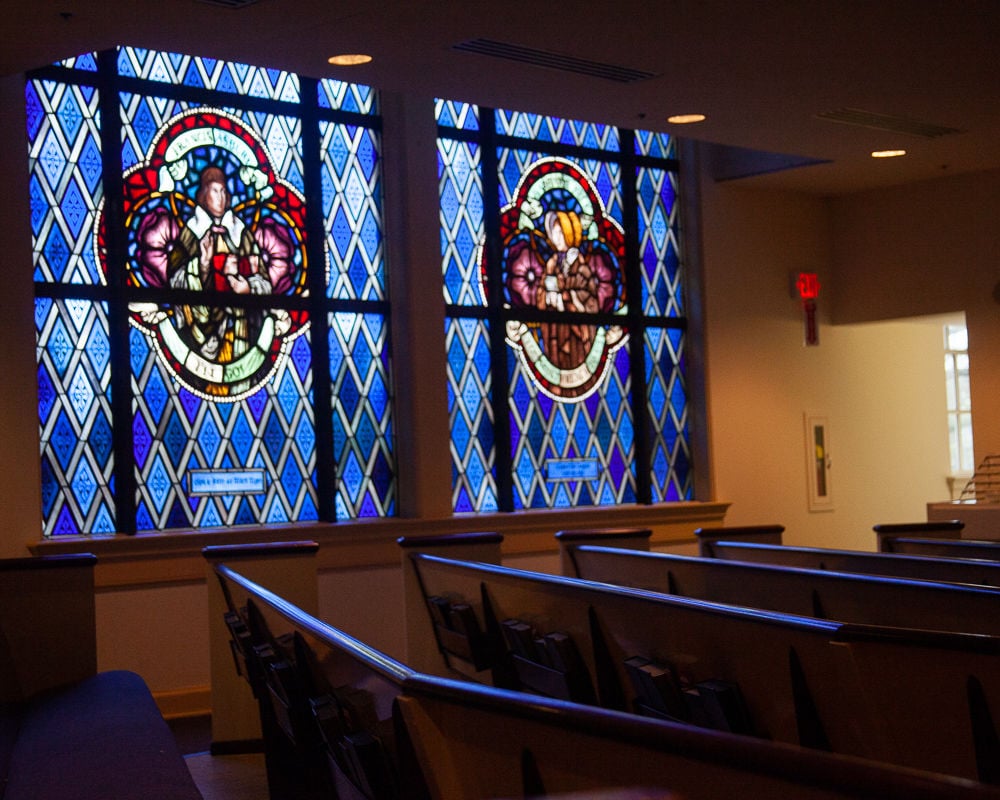 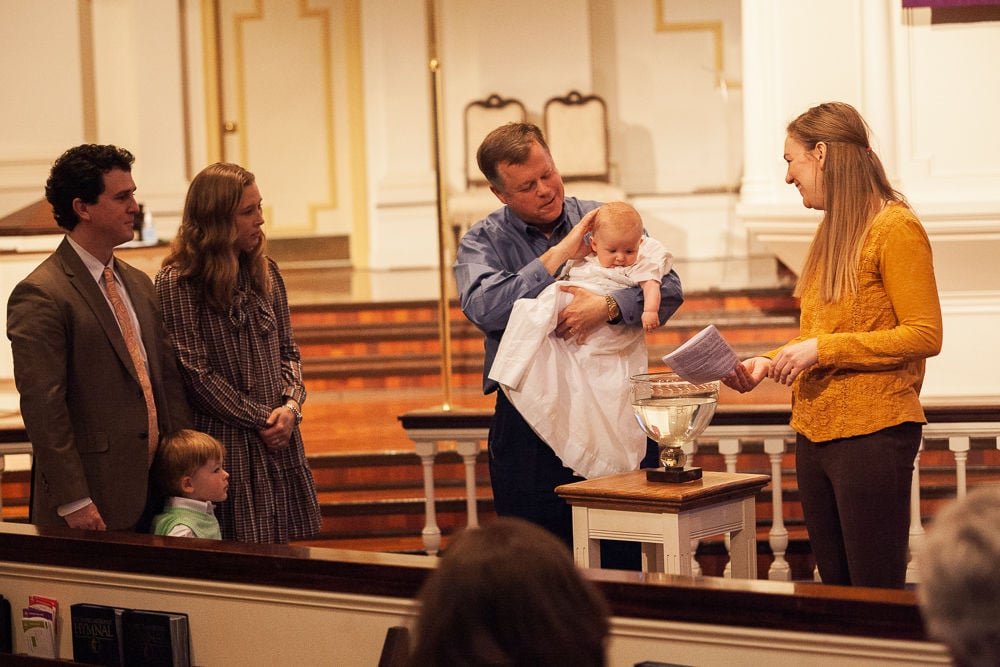 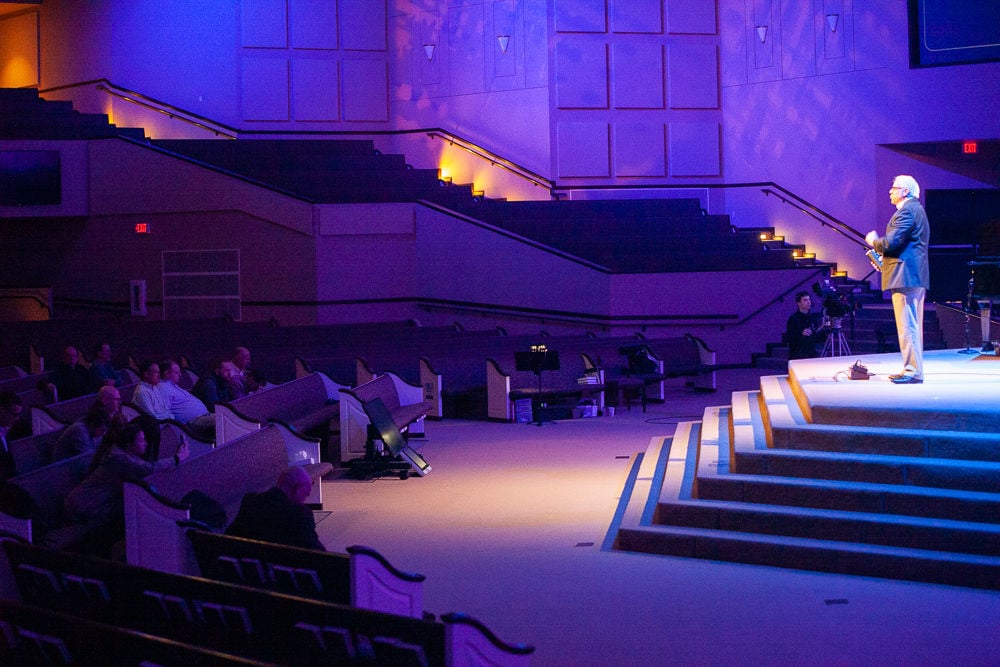 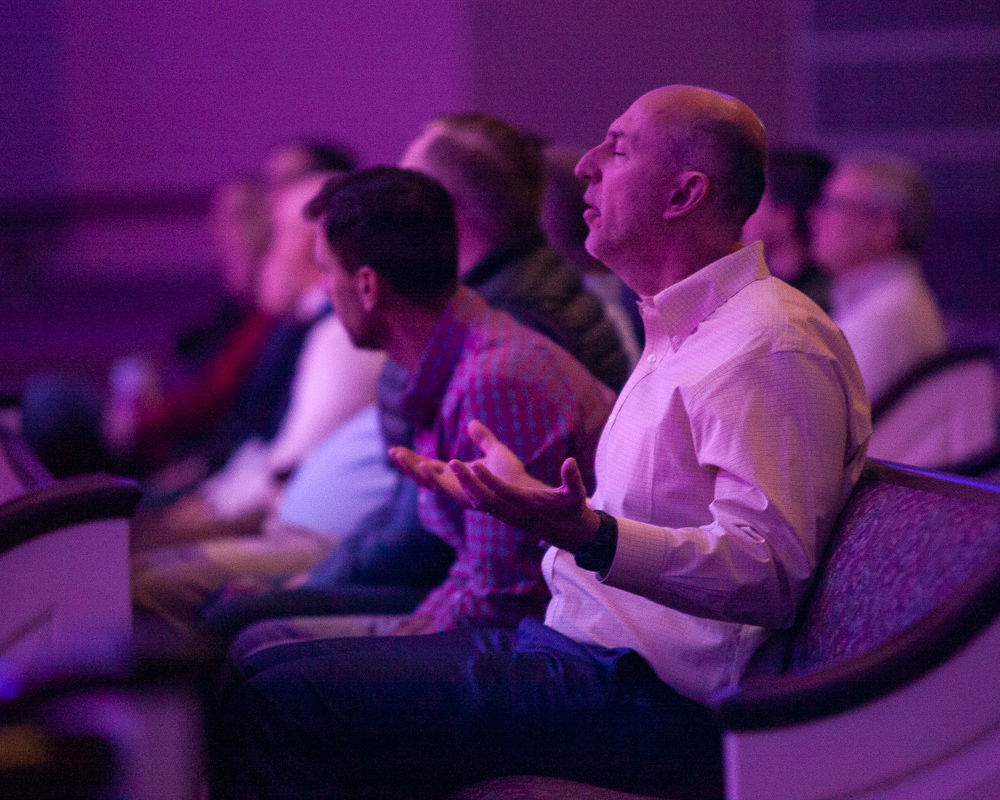 Brentwood Baptist Church sat nearly empty except for some staff and church leadership during Sunday service as the service was live-streamed due to the COVID-19 outbreak. 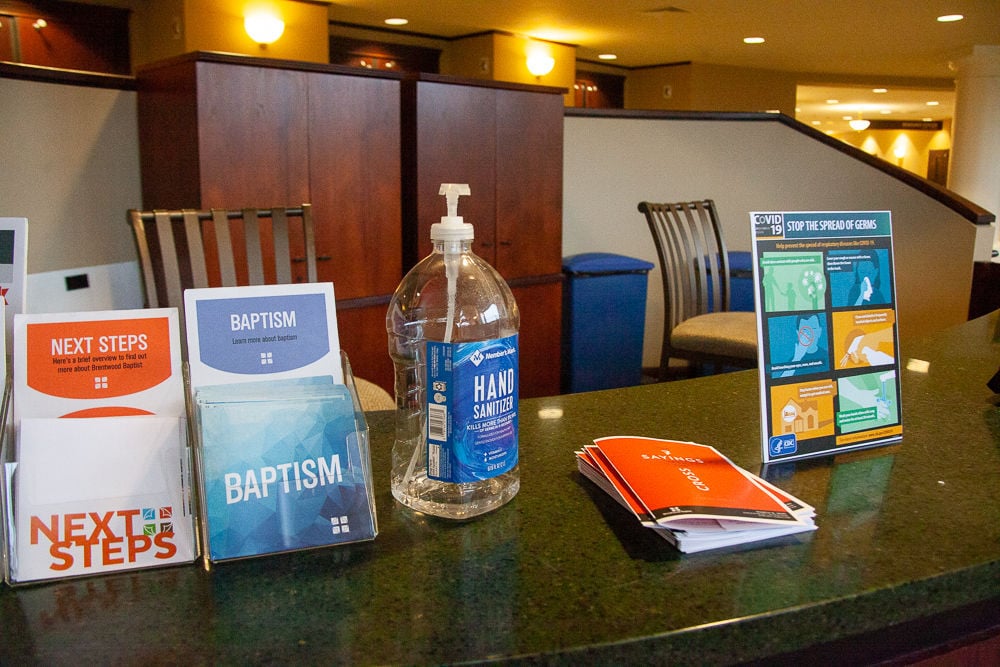 Hand sanitizer and a guide of personal health tips was displayed on the front desk of Brentwood Baptist Church which live-streamed their Sunday service due to the COVID-19 outbreak. 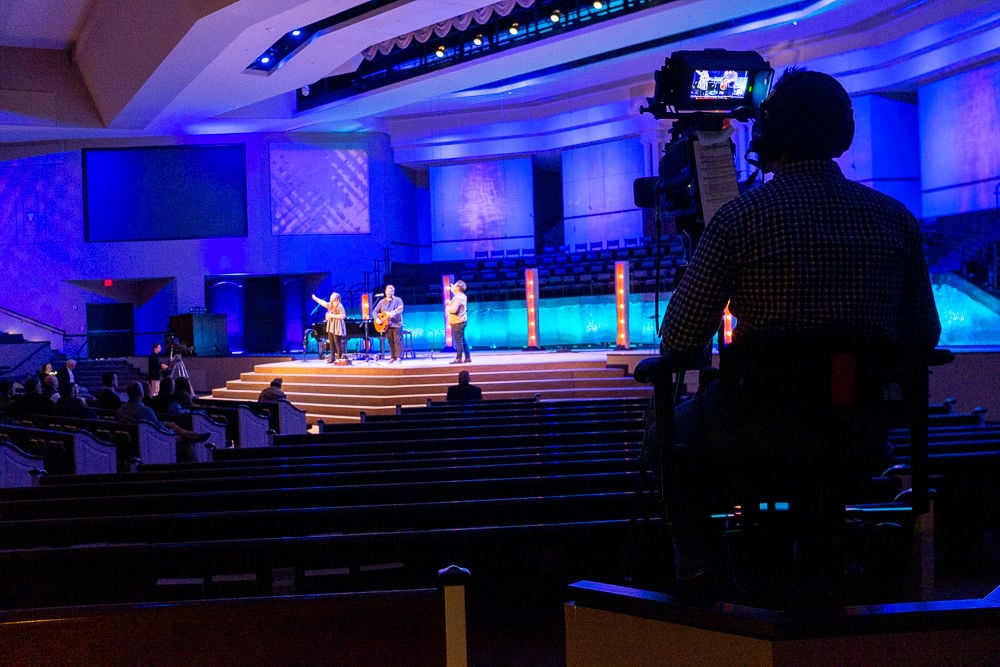 Mulit-cam crews record and live-stream Brentwood Baptist Church's Sunday service in a nearly empty hall due to the COVID-19 outbreak. 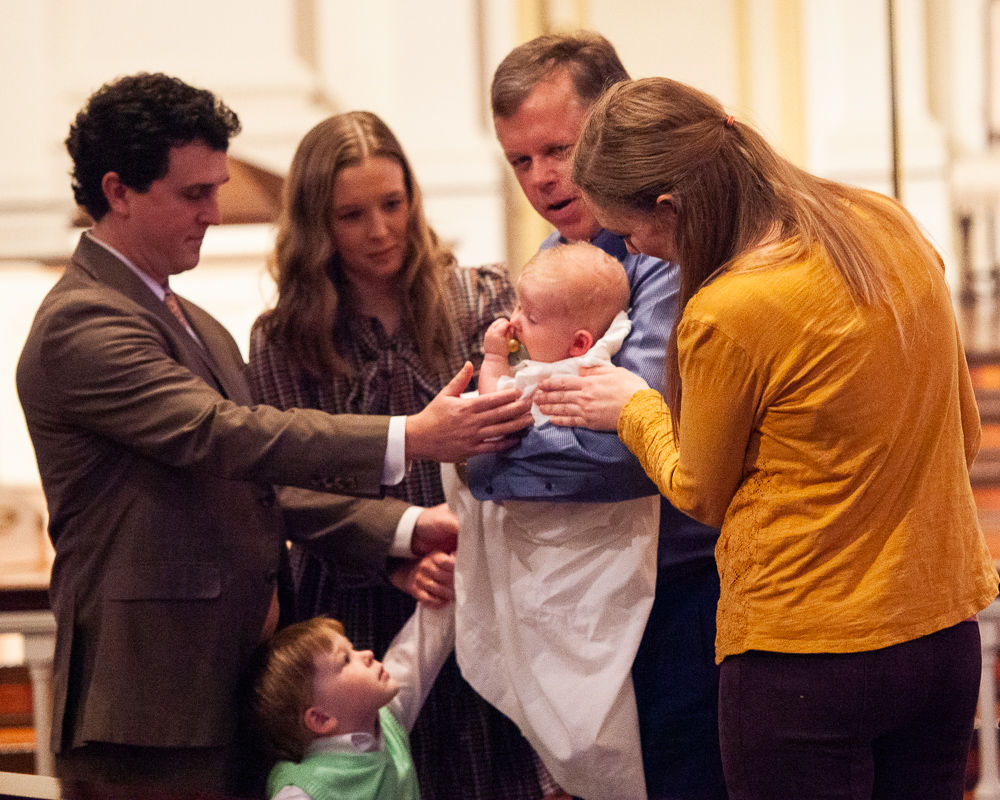 Issac, Jensi and Lincoln Sanders are joined by Brentwood UMC's Senior Pastor Davis Chappell and Lead Pastor of Adult Ministries Allison Gossett as they pray over Luke Patton Sanders during a private baptism.

Churches and other houses of worship across the country halted in-person services on Sunday in favor of online live-streamed services amid the ongoing COVID-19 pandemic.

COVID-19 has shut down operations across the county and was the reasoning behind Gov. Bill Lee’s declaration of a state of emergency on Thursday, followed by a national state of emergency that was declared by President Donald Trump on Friday.

Brentwood Baptist Church normally streams their Sunday services in addition to seeing over 3,000 people in person throughout their three services at their Concord Road location, but on March 15 the sermon issued by Senior Pastor Mike Glenn was delivered to about 30 people in person made up of Brentwood Baptist church leadership and their assortment of technical crew members manning the control panels and multi-cam systems.

"In all of my ministry I've never been in a position like this," Glenn said as he welcomed families watching in their homes on their televisions, computers, tablets and smartphones, first leading a discussion and prayer with fellow campus pastors at the 9 a.m. service.

Brentwood Baptist Communications Minister Steve Smith said before the service that the decision to suspend the traditional services across their eight locations that serve an estimated 12,000-member congregation was made on Friday.

"It's quite a different experience to be here on a Sunday morning and for it to be so quiet," Smith said. "Our sense is that everyone appreciates and respects and understands the decision."

Just a few miles down the road another house of faith, Brentwood United Methodist Church, also chose to live-stream their service for the first time ahead of the planned technology expansion set for later in the year.

Brentwood UMC's Senior Pastor Davis Chappell said that the in addition to success of the live-streamed service, connecting with his congregation was especially important in uncertain times.

"Today I preached on Job, who of course is very relevant to our situation of the presence of God in the midst of our suffering," Chappell said. "The whole theme of today's worshiping was social distancing doesn't mean spiritual distancing."

While Brentwood UMC also had a limited amount of staff onsite for the 9:45 a.m. service, they did provide one traditional in-person service, the Baptism of one of their newest members.

Issac and Jensi Sanders were joined by their son Lincoln and small group of other family members for the baptism of their five and a half month old son Luke Patton Sanders after the online service, an important milestone that they said they were grateful could continue to take place.

Issac has attended the church for nearly 30 years and the baptism had been scheduled ahead of time by nearly three months, long before the current public health crisis was a topic on nearly every American's mind.

"This is obviously one of the biggest moments in your faith life and we wanted our family members there for it," Issac Sanders said. "We asked them a very long time ago to be there for it and there was very little hesitation on anyone's part expect for some family members who are older or some who had some signs of illness that they wanted to make sure to not expose anybody to, so we had a good turnout despite the situation."

"They were accommodating in a way that we didn't even ask for, and for me that meant so much," Jensi Sanders said.

Chappell said that the baptism served as both an important moment for the Sanders family and as sign of hope for all.

"It's a holy moment for them, it's an initiation moment for the family and the child, so we didn't want to do anything that would take away the importance of that, and the other thing is that in the midst of this moment in our own community this is a bright spot of hope that we see in this precious child, the gift of God," Chappell said. "We acknowledge that through this child God is chasing as his own and that has ripple effects not only in their biological family but in the whole spiritual family as well."

And while the Issac and Jensi Sanders said that they have concerns over the unknown and growing challenges of the virus, for at least a moment they had a reminder of the power and purpose of faith.

"We've both been concerned like everybody else and this is disrupting everybody's lives, there's nothing unique about our situation," Issac Sanders said. "But we were saying in the car on the way home we were both talking about how good it felt to be inside the church, inside the main chapel, I think there's something calming and comforting and gives you hope when you're inside a church during times like these."

It's unclear how long churches and other houses of faith will be forced to suspend their on-site services, but with technology and the continued presence of the faithful, it's clear that the message of hope and support of one another through crisis will not waver.