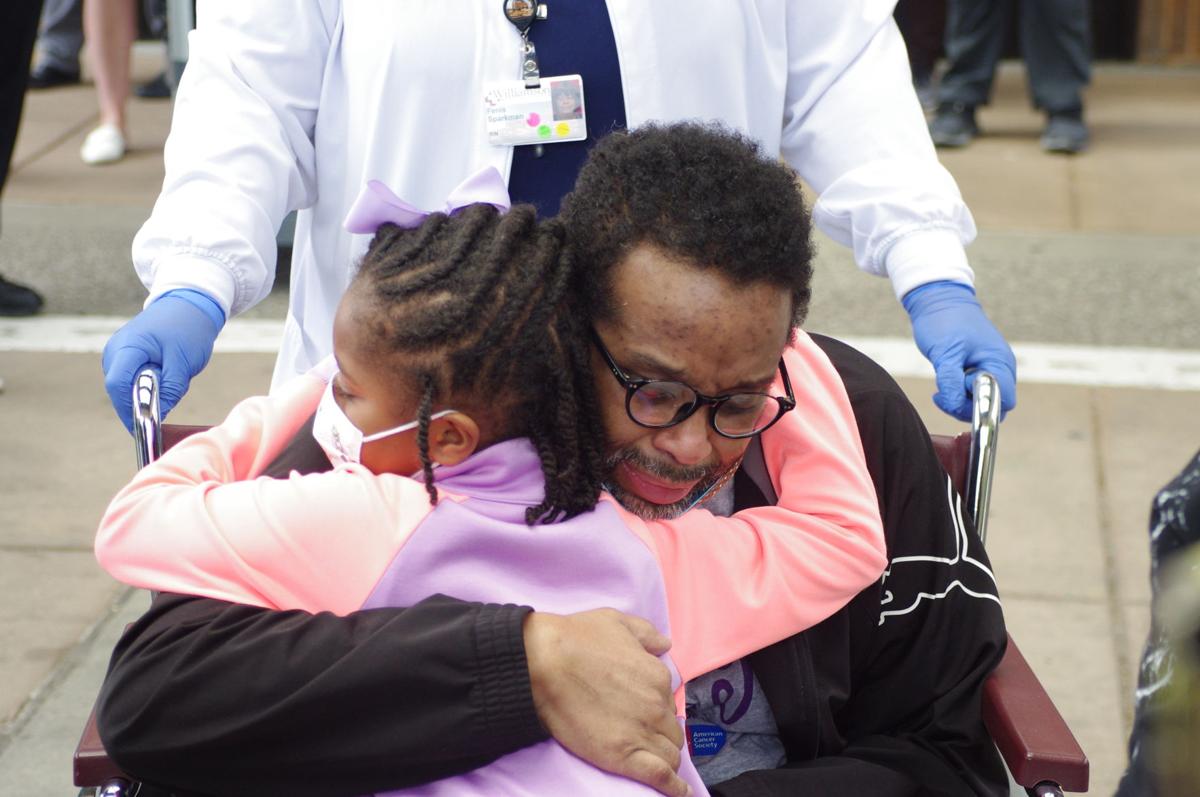 Isaiah Whalum embraces his daughter after being released from Williamson Medical Center on Tuesday. 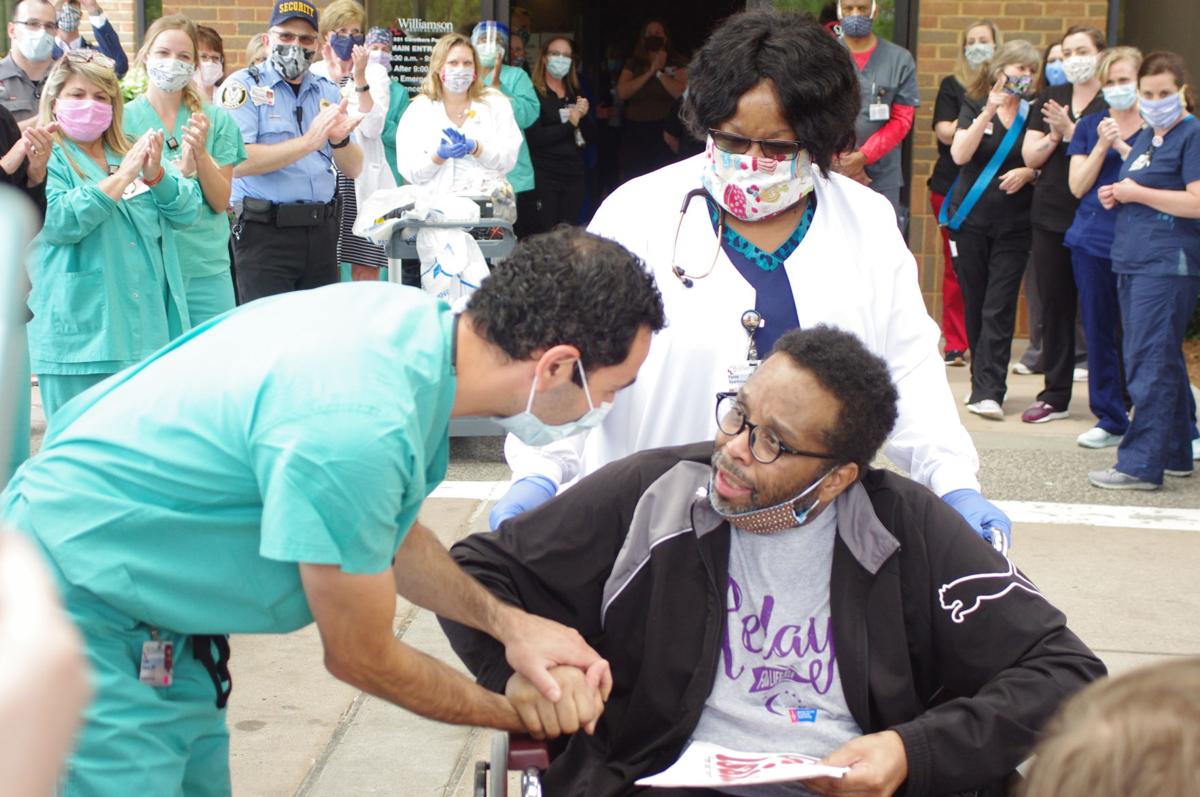 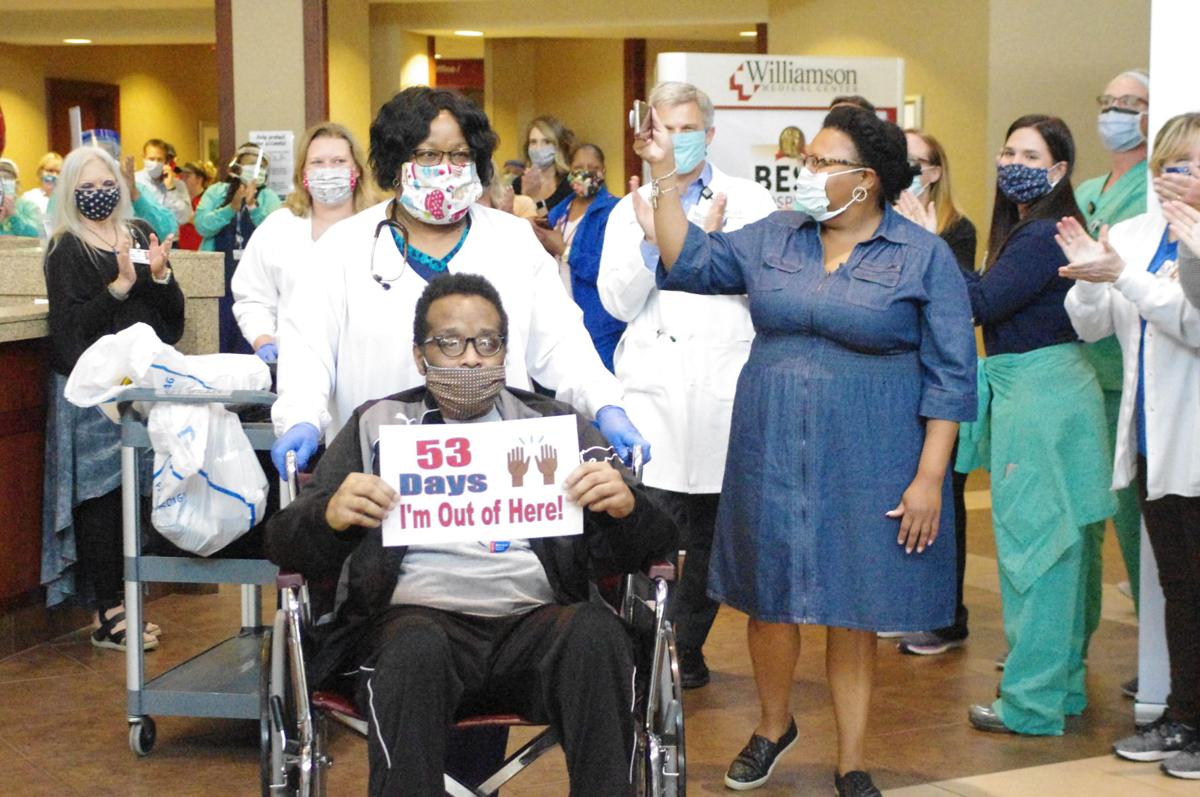 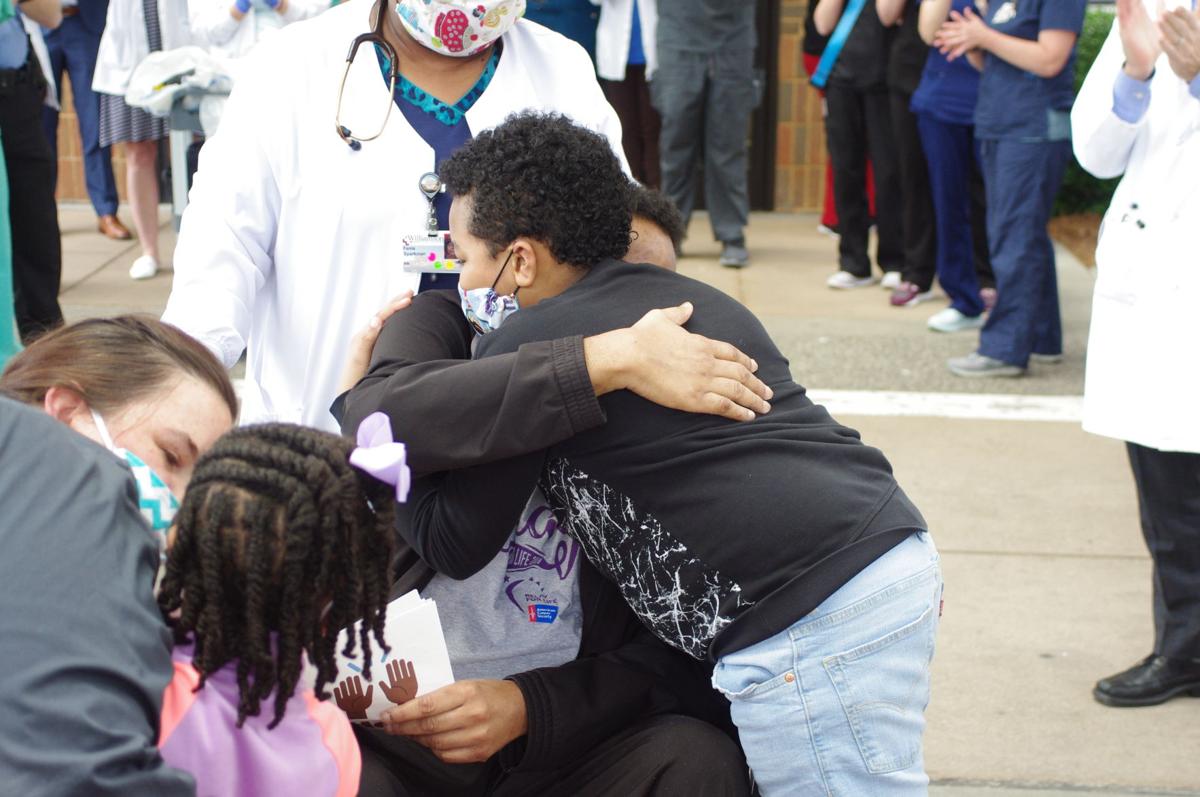 Whalum embraces his son after being released from Williamson Medical Center on Tuesday. 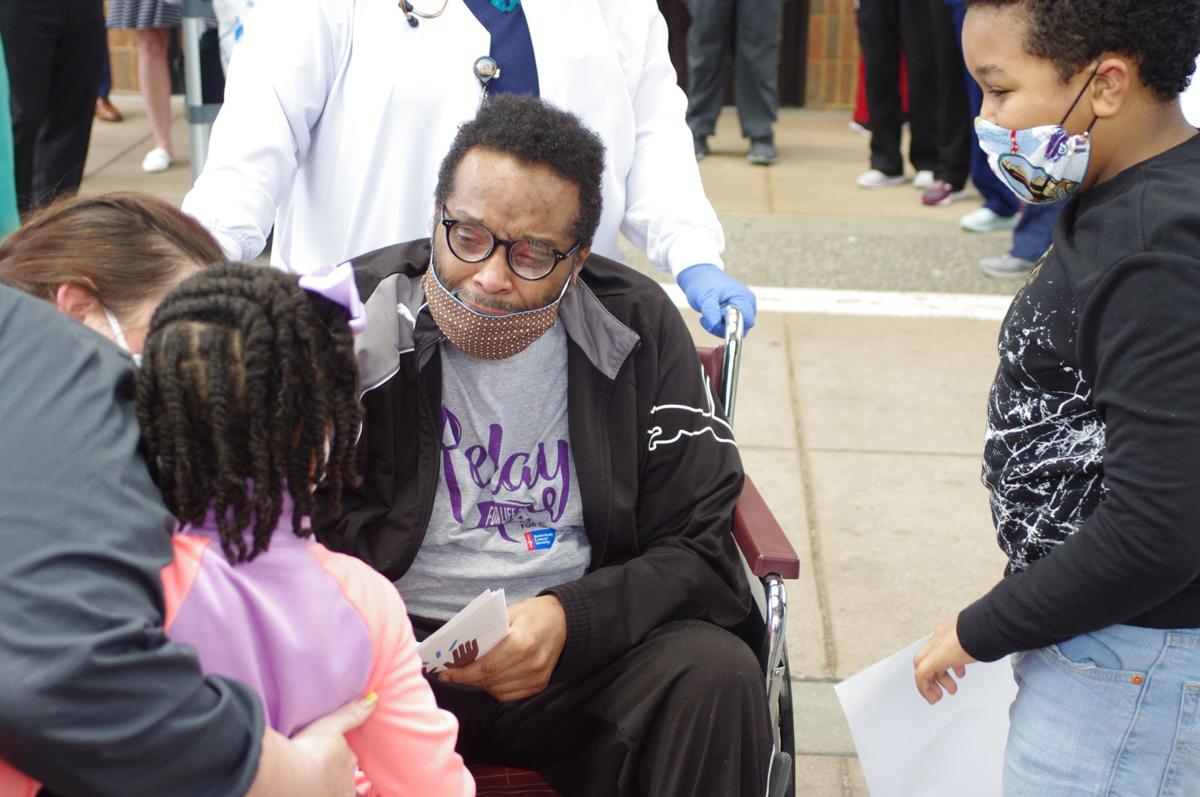 Whalum sees his daughter in person for the first time in weeks after being released from Williamson Medical Center on Tuesday. 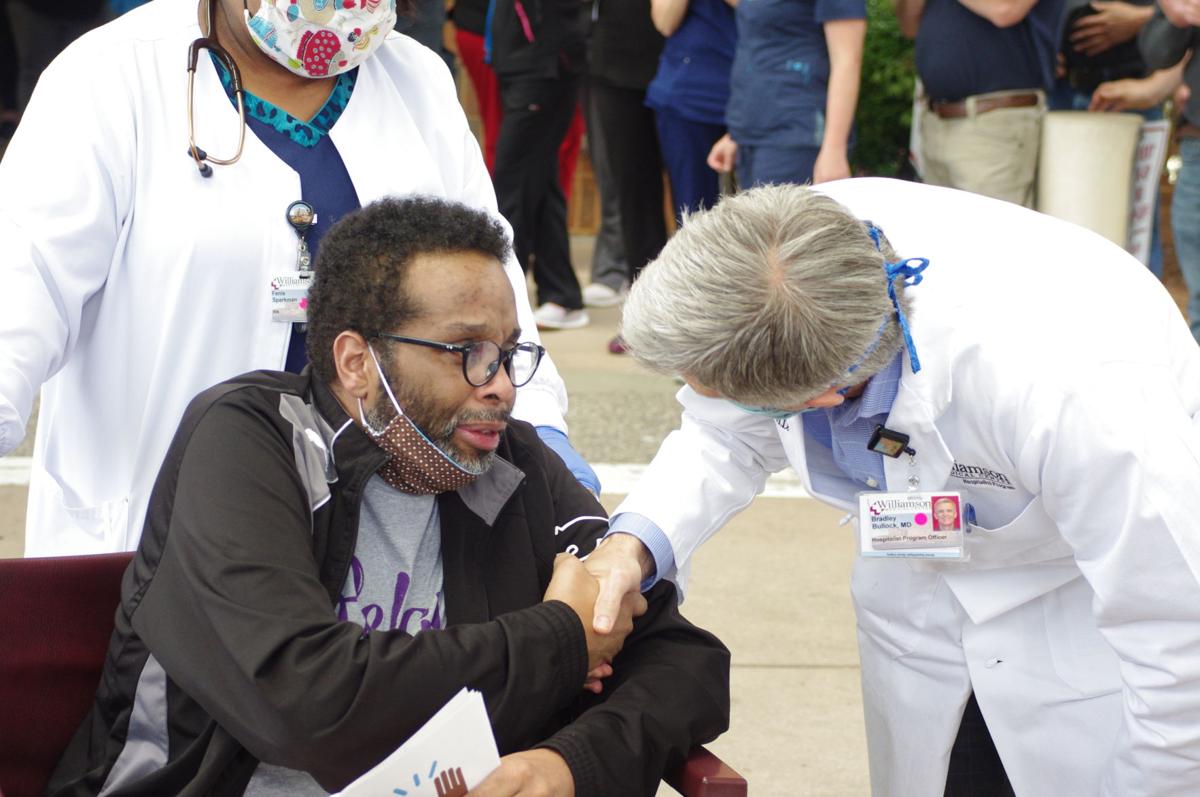 A doctor wishes Whalum good health after his release from Williamson Medical Center. 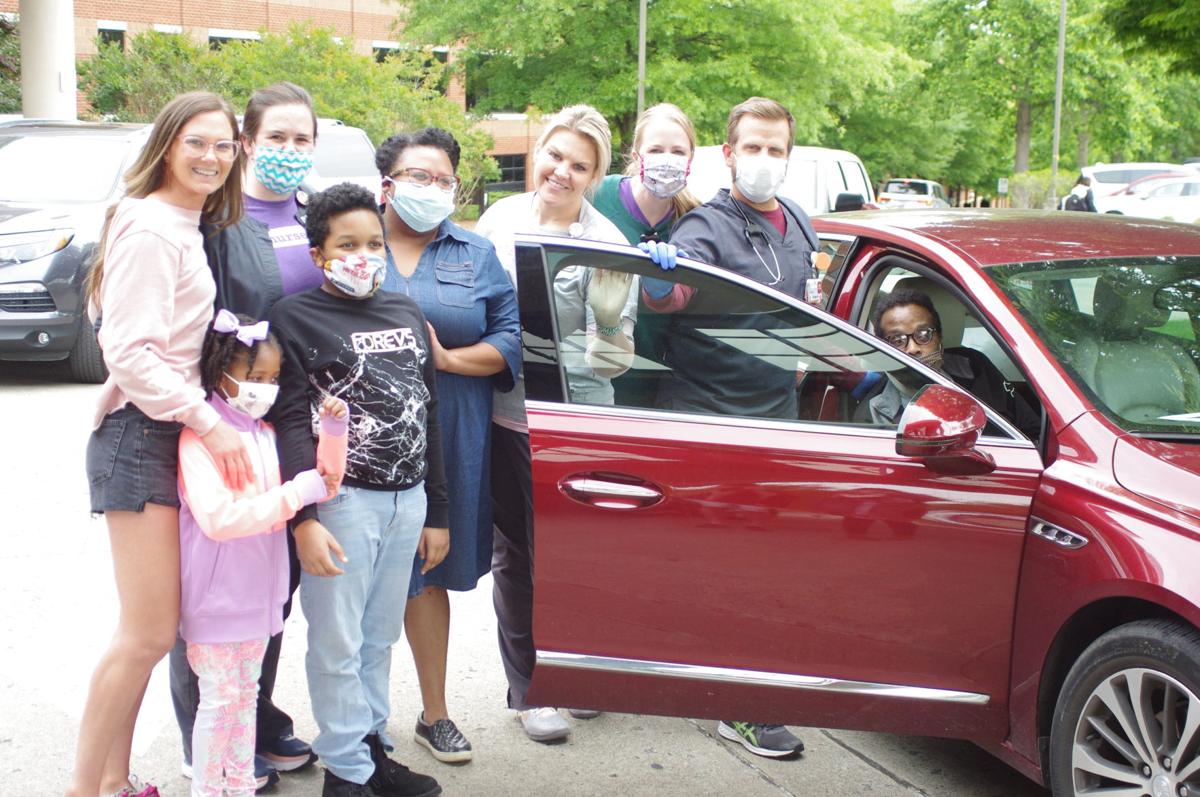 Whalum's friends, family and caretakers pose for a photo before his trip to Vanderbilt Stallworth Rehabilitation Center in Nashville.

Isaiah Whalum embraces his daughter after being released from Williamson Medical Center on Tuesday.

Whalum embraces his son after being released from Williamson Medical Center on Tuesday.

Whalum sees his daughter in person for the first time in weeks after being released from Williamson Medical Center on Tuesday.

On March 21, 46 year-old Isaiah Whalum was admitted to Williamson Medical Center in Franklin where he would later be diagnosed with COVID-19.

On Tuesday, nearly two months later, Whalum’s family, including his two young children, along with dozens of WMC staff, would greet him at the hospital’s entrance with thunderous applause, celebrating his “true fighter” resolve in beating COVID-19.

“He’s on the elevator — five more minutes,” shouted a WMC staff member, who, along with dozens of other medical staff, was eagerly waiting for Whalum to make his appearance in the hospital’s lobby. As soon as Whalum appeared from a distant hallway, sign in hand that read “I’m out of here,” the lobby exploded with applause.

Among Whalum’s family there that day to celebrate his release was Feitra Write, the mother of Whalum’s two children. When asked about the 53-day experience of Whalum’s treatment, Write said that it was “very emotional [and] very scary,” but that it was her faith that kept her strong.

“God showed up, and today is a great day,” Write said. “Our faith in god [kept us strong], and these nurses and doctors are wonderful — they're like family.”

Write said that Tuesday was her first opportunity to meet Whalum’s caretakers face to face, as they had communicated over the past 53 days only over phone or email.

Whalum’s partner, India Scruggs, also shared high praise of WMC’s staff, who she said had kept her up to date on Whalum’s condition day or night.

“It's been stressful, but I knew that he was in great hands,” Scruggs said.

“Once I started interacting with the medical staff, calling me every day, sometimes twice a day, I knew he was in the exact place that he needed to be. We had people all over the country praying, and just knowing that he's a fighter and that he's stubborn as a mule [kept us going].”

After leaving the hospital’s entrance, Whalum was escorted to a nearby vehicle where WMC medical staffer James Chappell would give his thanks, his goodbyes, and his good wishes to Whalum for beating the odds.

“[This day] means a lot, just simply because you see so many people coming and going, and he was one of our first [COVID-19 patients],” Chappell said. “It's just absolutely amazing to get to this point where you can see all of the hard work, all of the care and the love from family and staff. It's a team effort, and to get to this point is so important to all of us.”

Calling him a “true fighter” and “family,” Chappell waved on as Whalum prepared to leave.

Whalum is expected to undergo two weeks of rehabilitation at Vanderbilt Stallworth in Nashville before finally returning home. Upon his return, Whalum’s son excitedly said that there would be a celebration in order, one that would hopefully include multiple cakes.