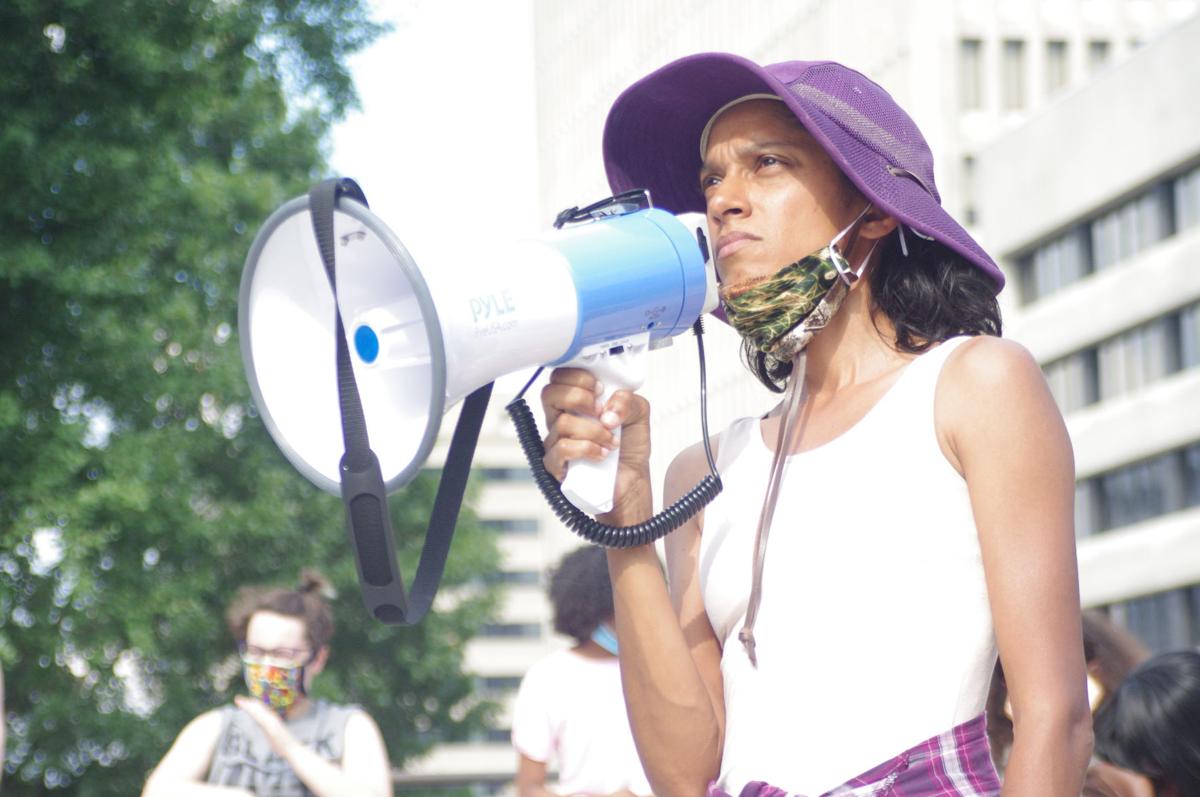 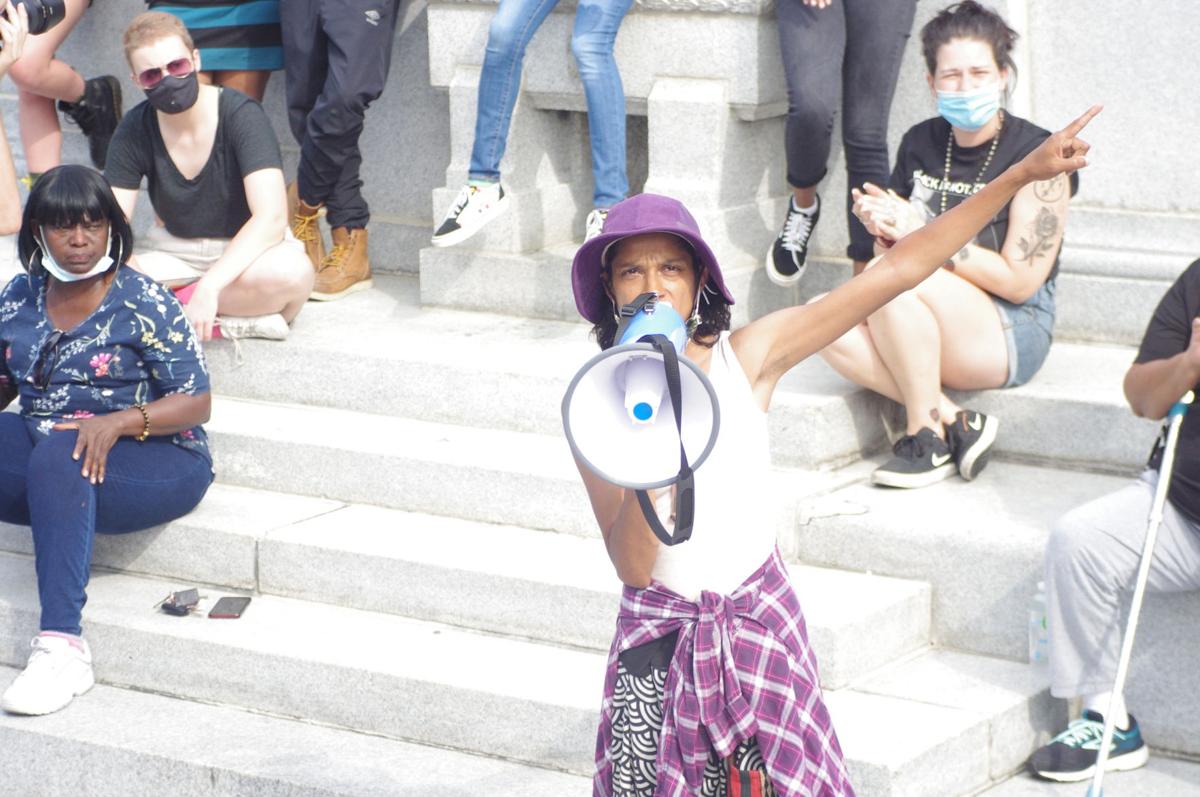 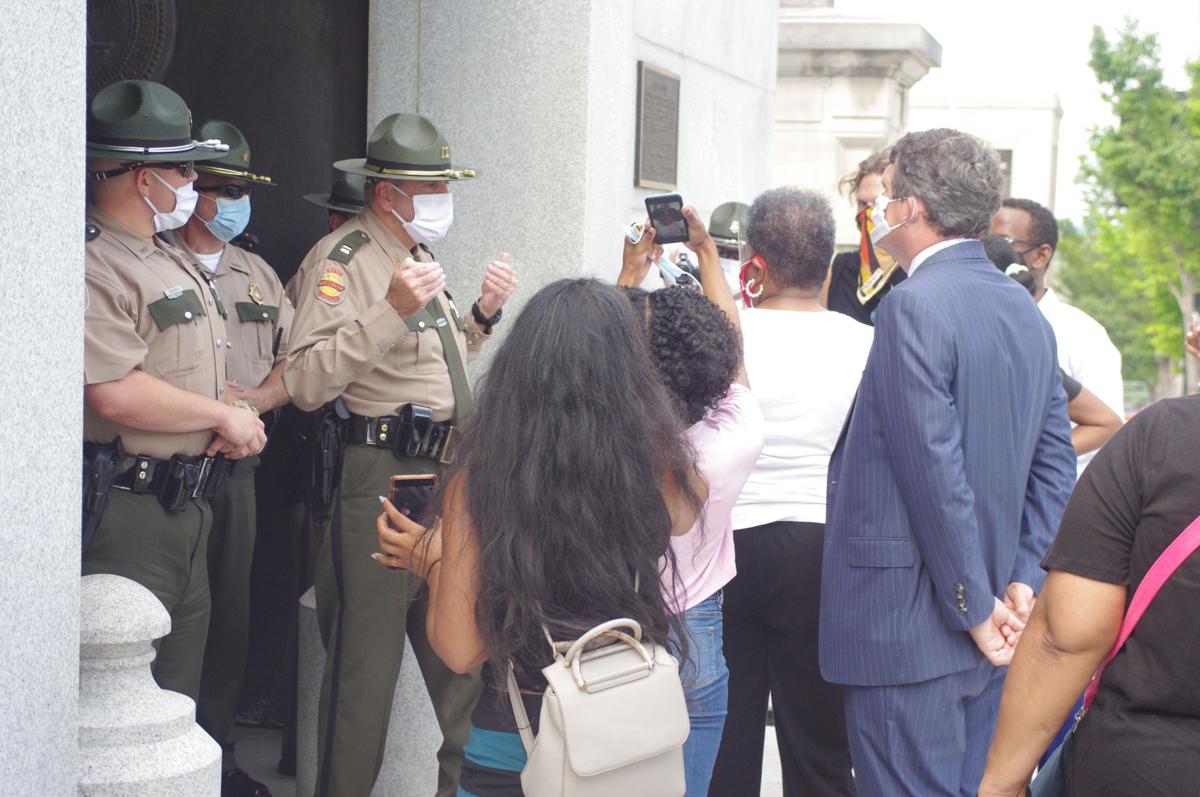 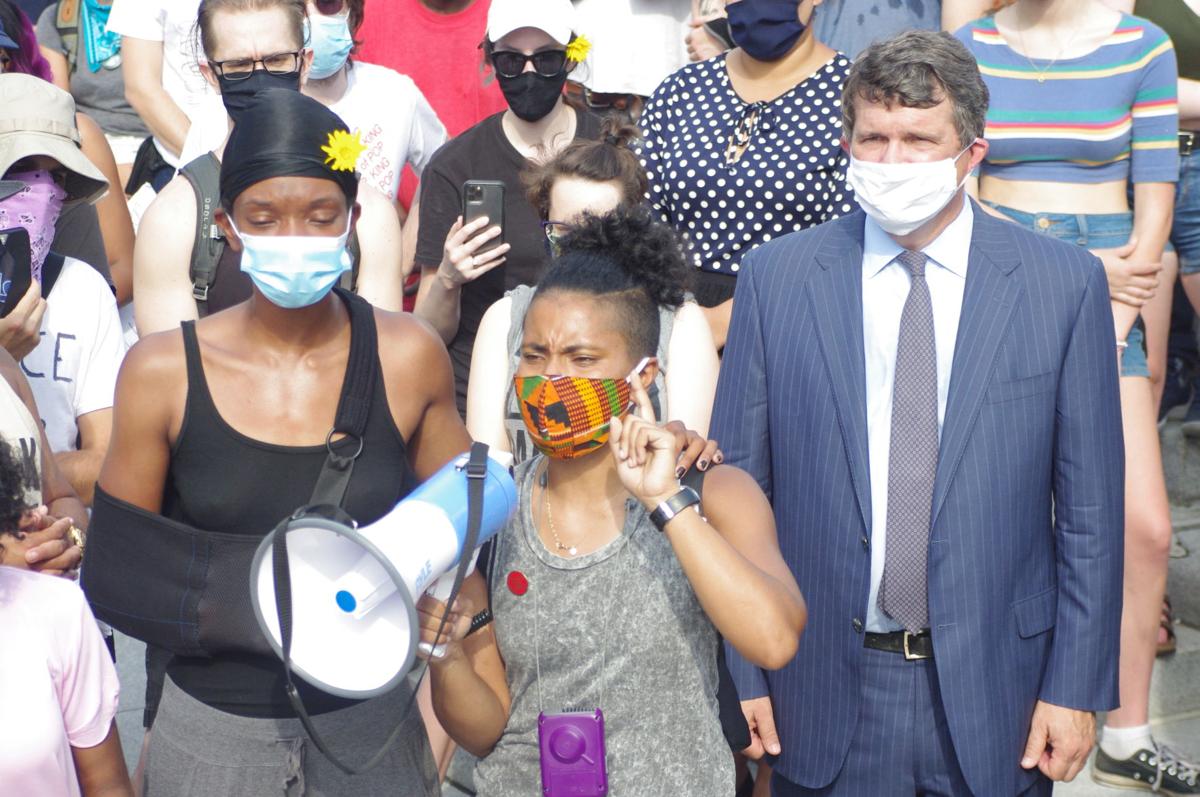 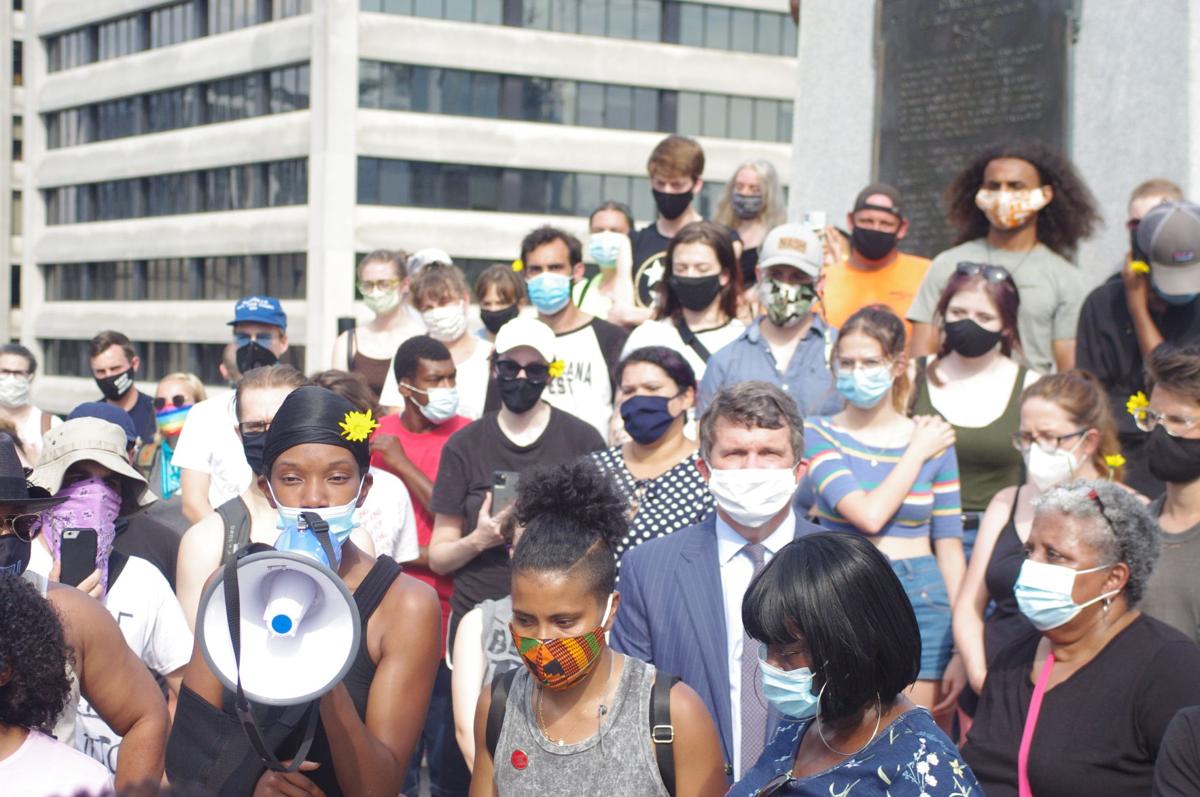 On Saturday, July 4, a total of 55 protesters were arrested on the State Capitol grounds by the Tennessee Highway Patrol, a Franklin resident among them.

Lt. Bill Miller with the THP said that the grounds were “clearly marked closed with digital signboards and paper signs,” and that protesters had moved barriers to access the steps of the building.

In response, the demonstrators have claimed that the State Capitol was “only closed to protesters” in a joint statement, writing that non-protesters were seen entering the premises to “exercise, walk and lay around” during hours that it was marked as closed.

It was the ensuing alleged conditions during and after the arrests, however, that were condemned publicly Wednesday by the demonstrators during the continued gathering at the State Capitol.

Franklin activist Angel Stansberry, one of the 55 arrested, joined in the Wednesday gathering and condemned the alleged treatment that she and the 54 others claim to have endured both during the arrests and while detained at the Hill Detention Center in Nashville.

Stansberry is among the main organizers of the continued Capitol Hill sit-in that has seen protesters occupy the Legislative Plaza across from the State Capitol Building since June 12. Protesters say they will continue the sit-in until they are granted an audience with Gov. Bill Lee to discuss defunding the police.

In addition to her general duties helping to organize the demonstration, Stansberry was chosen to help manage food distribution for demonstrators given her experience running Feed the Need Nashville, a nonprofit that feeds hundreds of homeless people a week.

At approximately 4:20 p.m. on Wednesday, State House Democratic Chair Mike Stewart spoke with THP officers, who after a short discussion allowed more than 70 demonstrators to ascend the steps of the State Capitol.

It was here that, one after one, demonstrators recounted the night of July 4 over megaphone, with those speaking alleging THP officers to have broken bones, caused concussions, and to have intentionally released a chemical irritant inside the detention center where demonstrators were detained.

“We were booked and processed by THP, then taken to a mobile unit,” Stansberry recounted. “Illegal fireworks were in the distance; they didn't care about that, but they had us with shackles around our feet watching Independence Day fireworks. The irony was not lost on us.”

Stansberry said that her and eight other demonstrators were then placed in a “cattle wagon” that had a six-person capacity.

“Nine [people] were shoved in a six-person capacity cattle wagon — I'm sure that's not up to Tennessee code,” Stansberry said. “Rules that you make up on the fly are not law — laws have to be passed. Luke Bryan and Jason Aldean's bars broke actual laws, and they weren't even cited.”

Describing the conditions at the Hill Detention Center, Stansberry said that they were unhygienic, did not allow for proper social distancing, and that she and others were “subjected to a chemical irritant released in a small, unventilated space.”

“No hand sanitizer, the nurse said that COVID-19 was just the flu,” Stansberry said.

Nashville resident Xtiana Danielle also spoke at the Wednesday demonstration, and went into further detail over the conditions she and others experienced July 4 at the Hill Detention Center.

“The cell had blood on it, spit all over the windows, and they put me in a cell next to that man who they told us was having a mental health episode,” Danielle said.

That man, who had previously been mentioned by Stansberry and was unrelated to the protest, was then gassed by detention center staff according to Danielle, and then carried out “screaming, his pants falling down.”

After calling for medical attention, Danielle said she was instead handcuffed and shackled by her legs and placed in a three-by-three foot isolation cell.

Nashville resident Jay Terry also spoke at Wednesday’s gathering, her right arm held in a sleeve and cast. Her arm, Terry said, had been broken Saturday after a state trooper had pushed her off a wall.

Terry also said that she had suffered a concussion after being slammed to the ground by a state trooper during a previous incident, an injury that saw her incur a medical bill of $10,000. She continued, saying that she was far from the only one who suffered injuries during the July 4 mass arrest.

“Other people were kicked, people were caused to have seizures,” Terry said. “It's not a matter of our word versus THP's word because every event that I have described to you today, we have it on camera. We have pictures, we have videos. Anybody who wants to see it can come and ask me.”

THP officers stood silently onlooking the gathering behind a metal barricade, and as the dozens of demonstrators, religious and state leaders listened to Terry’s account of events, Terry moved to mirror hers and others’ treatment by law enforcement with the broader issue of police killings.

“So when they say that we are the aggressors, that is a lie — we just don't want everything that we worked so hard for to be taken from us,” Terry said. 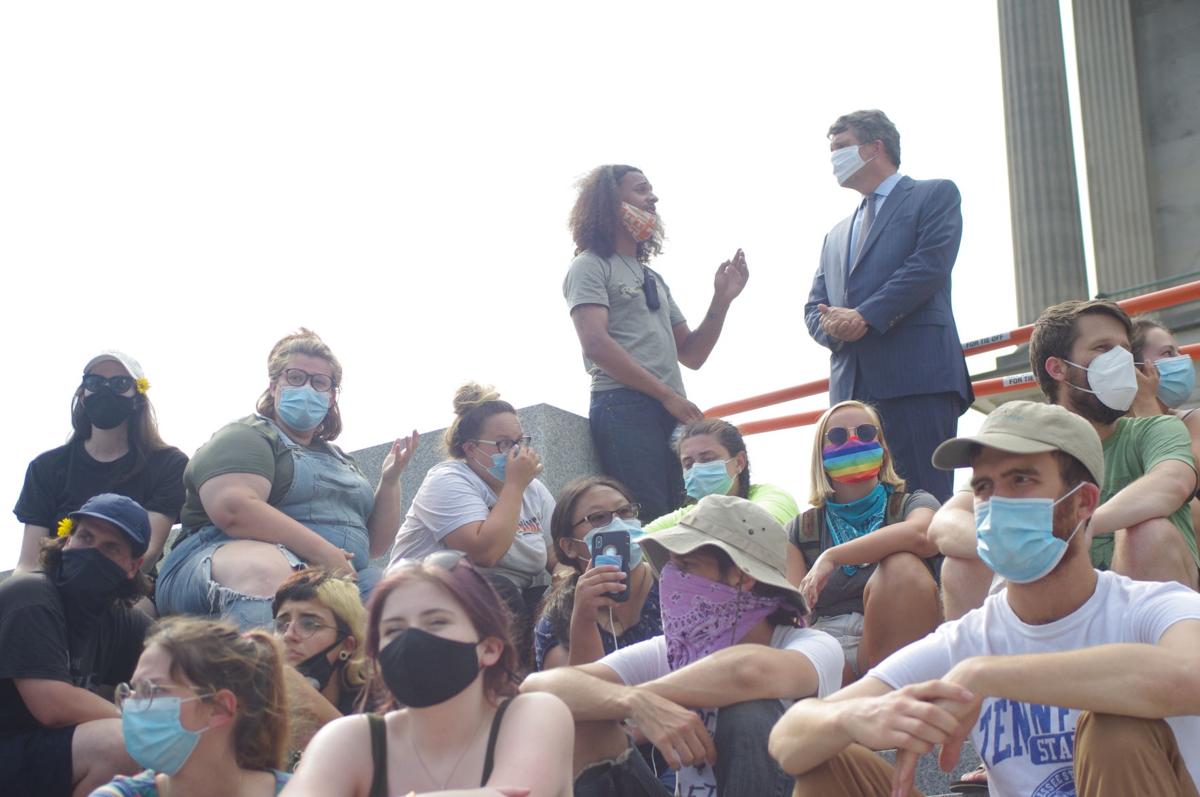 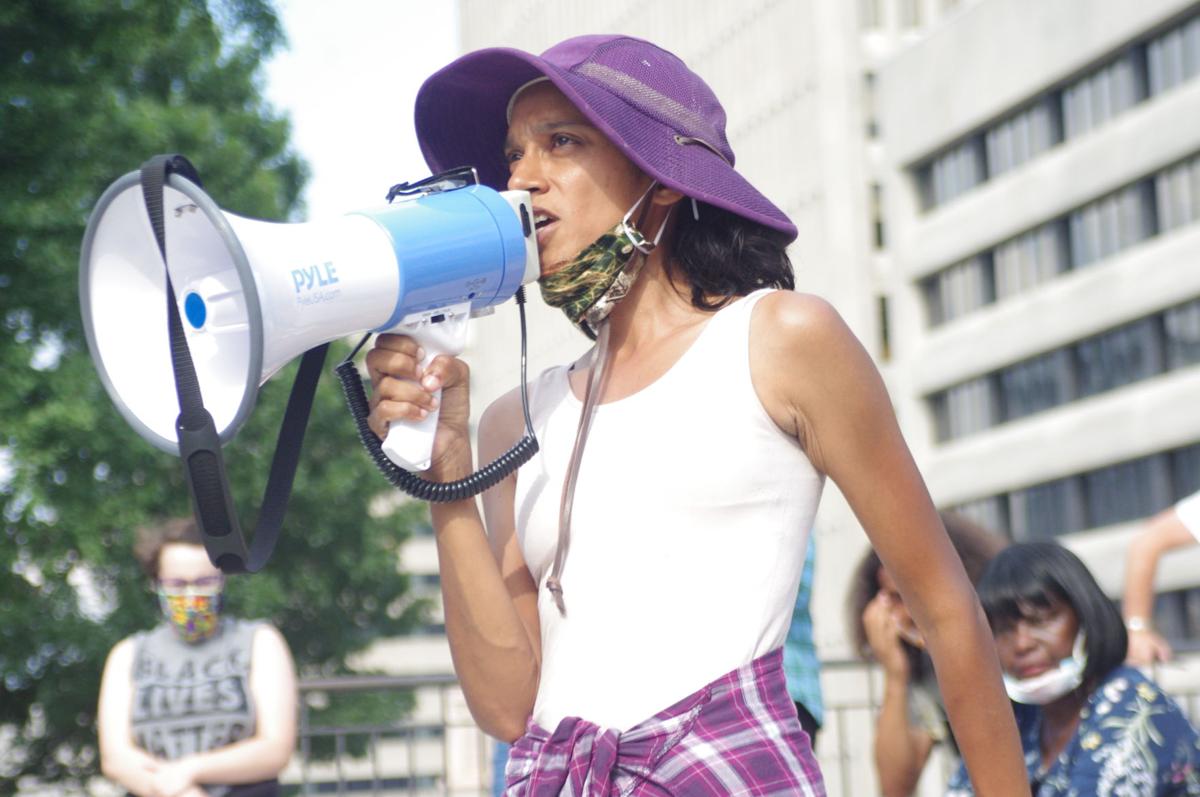 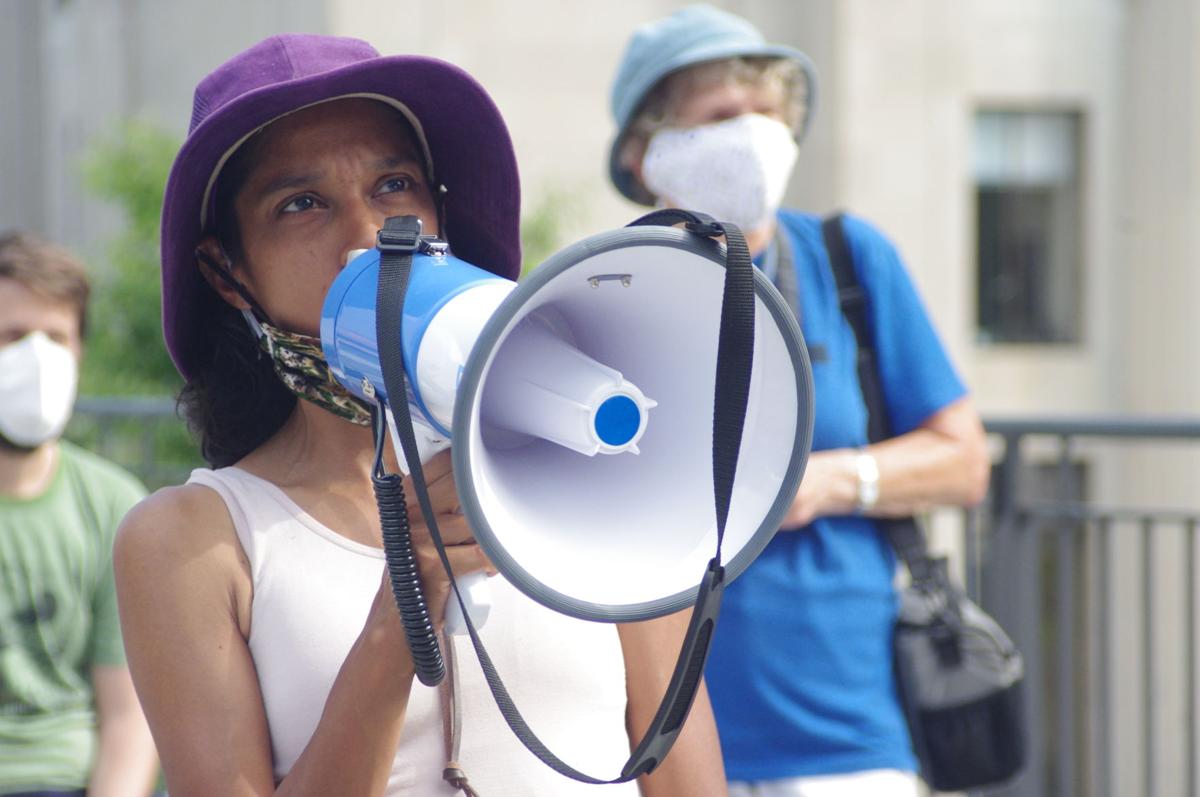 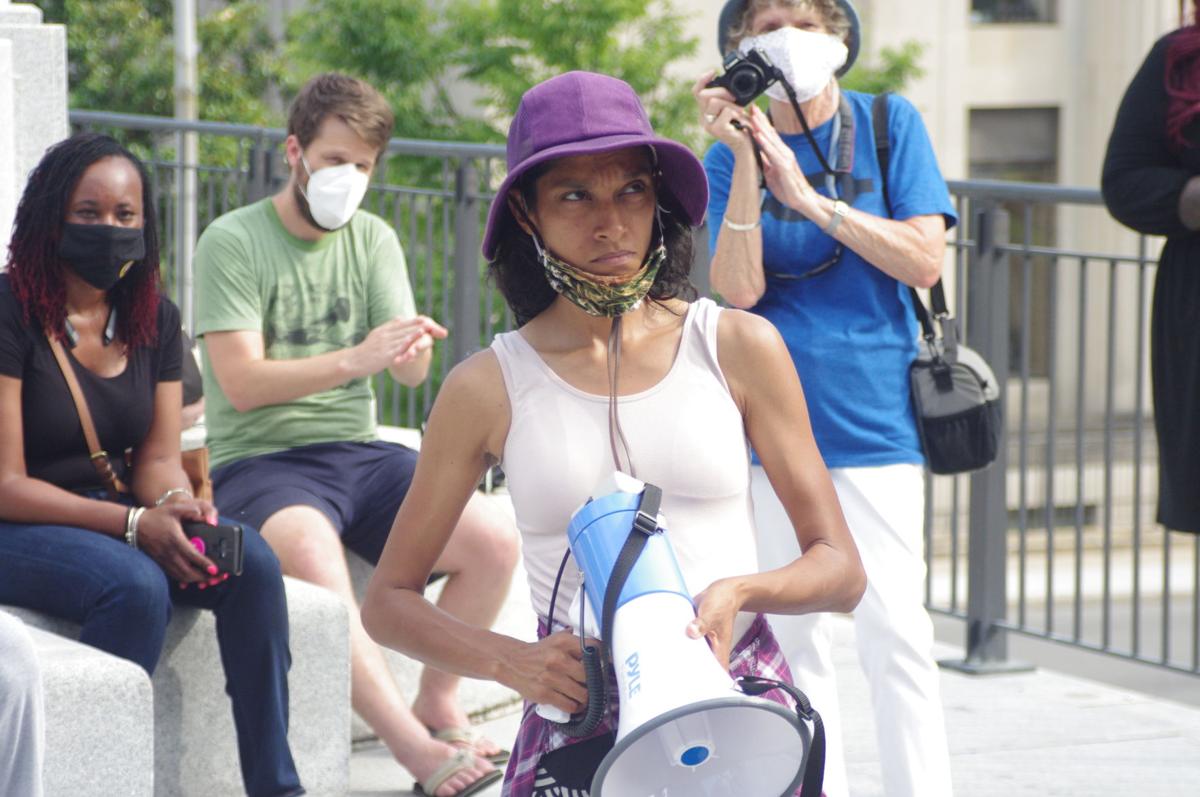 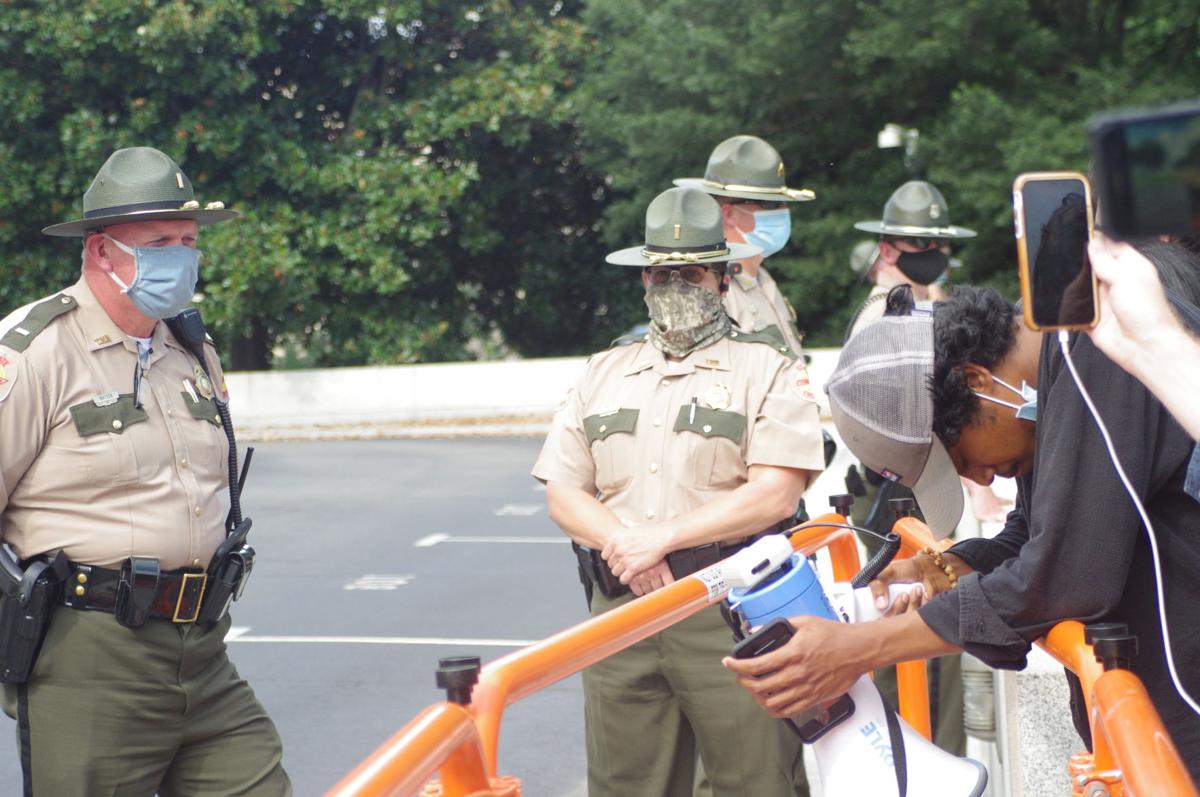 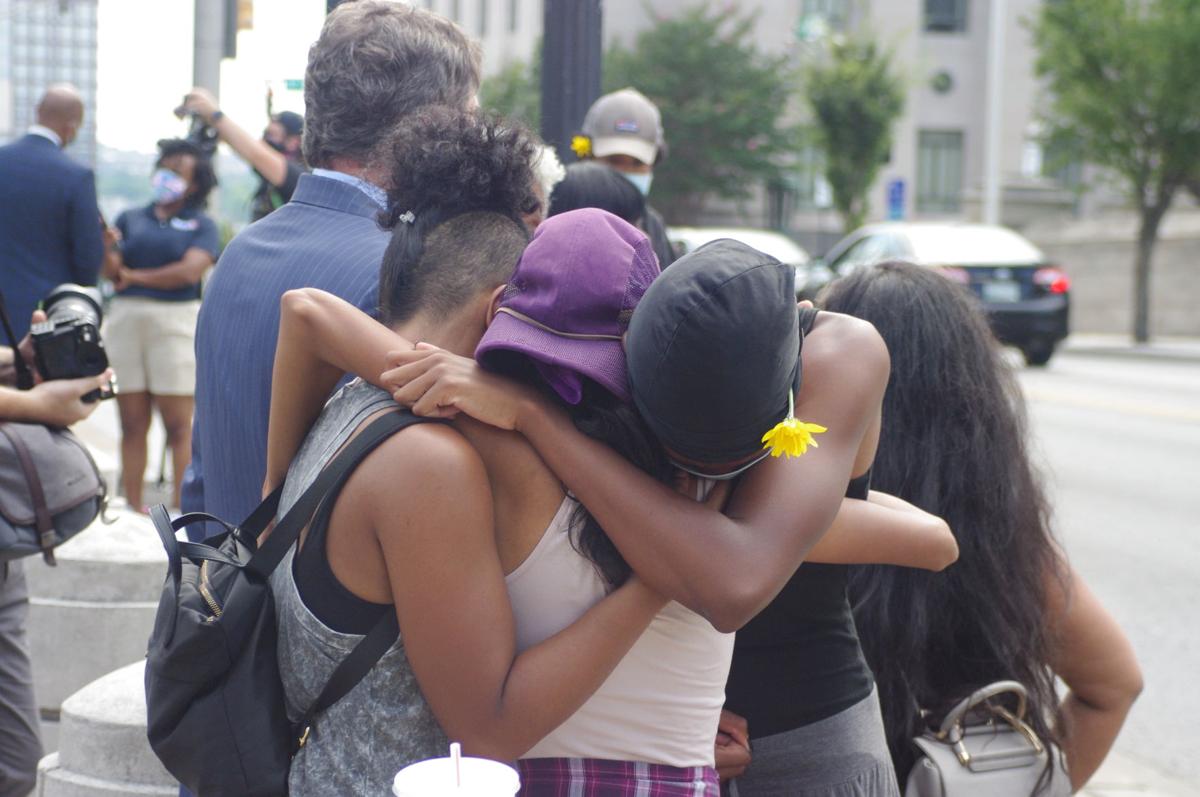 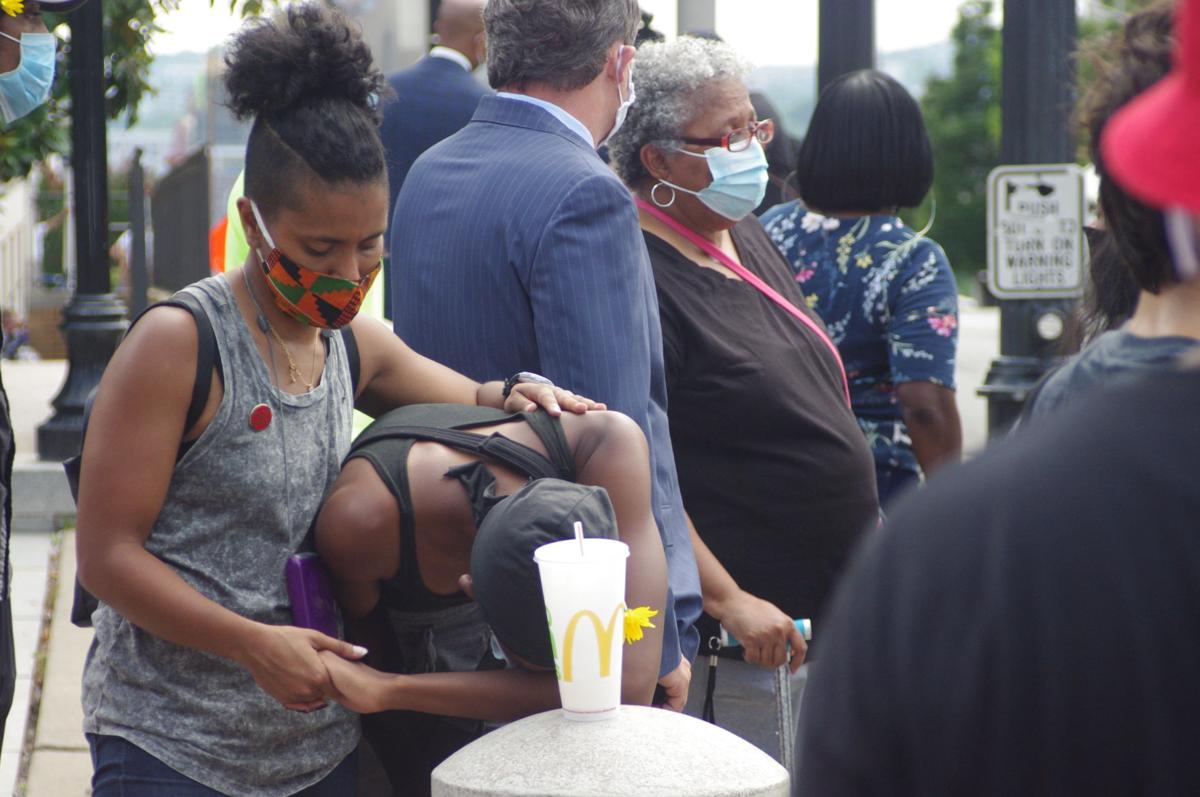