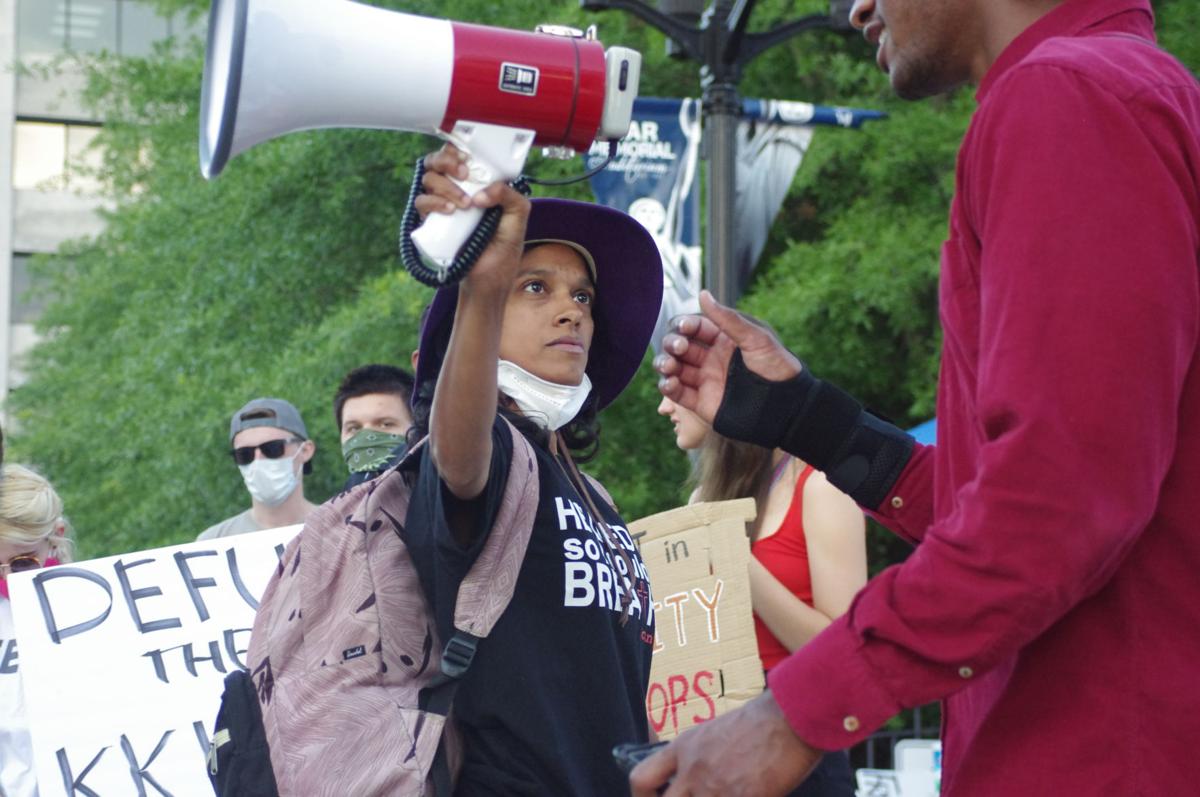 Angel Stansberry allows for one of the demonstrators to speak to state troopers lined up across the street. 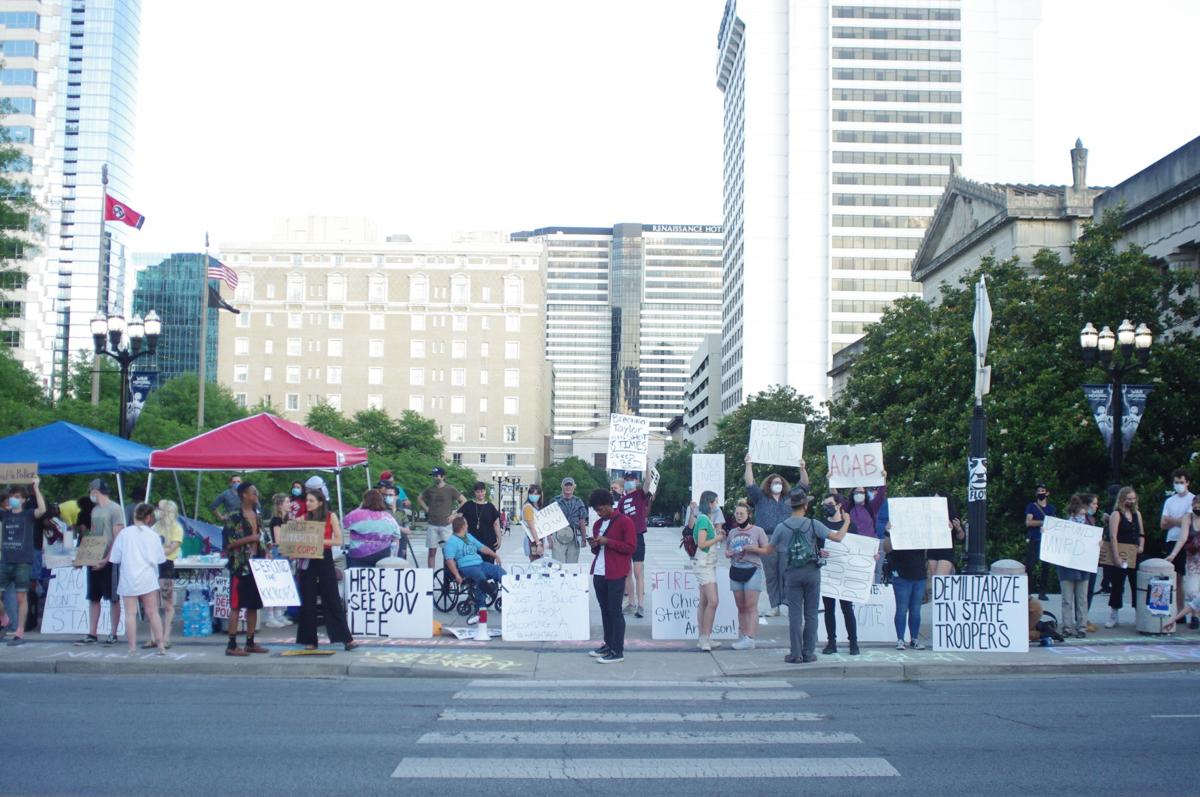 After being booted from the steps of the State Capitol Building Monday night, demonstrators have now taken up camp across the street at the Legislative Plaza. 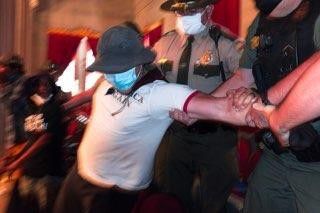 A demonstrator is pulled by state troopers after orders were given to have them removed from the Tennessee House Chamber. 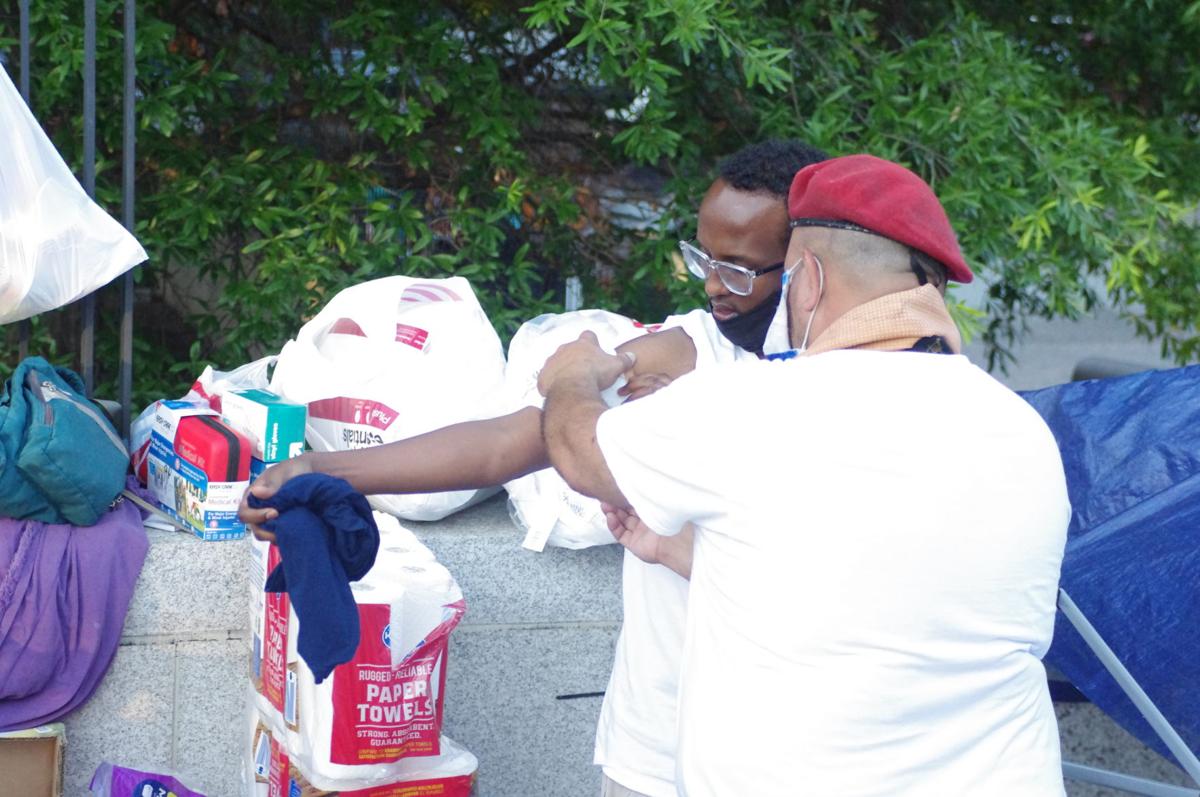 Mohamed Gure (left) is treated for injuries sustained to his arm after being forcibly removed from the State Capitol Building. 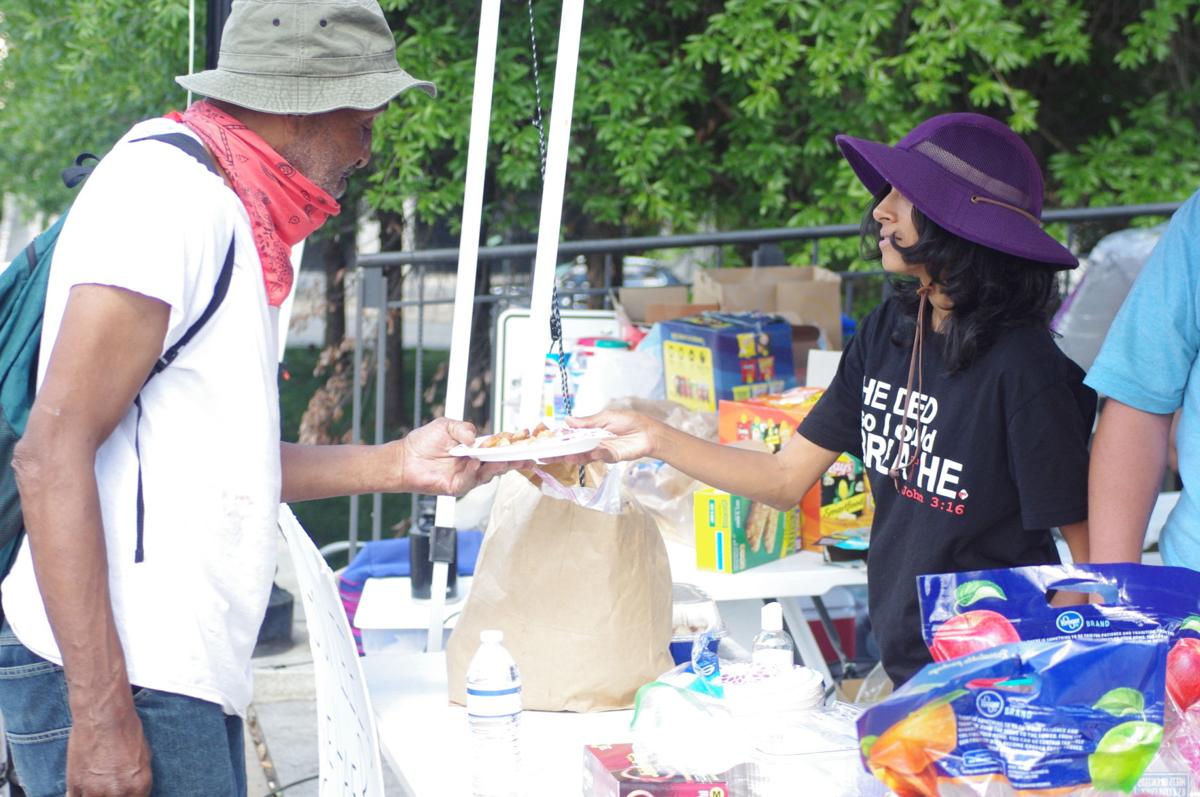 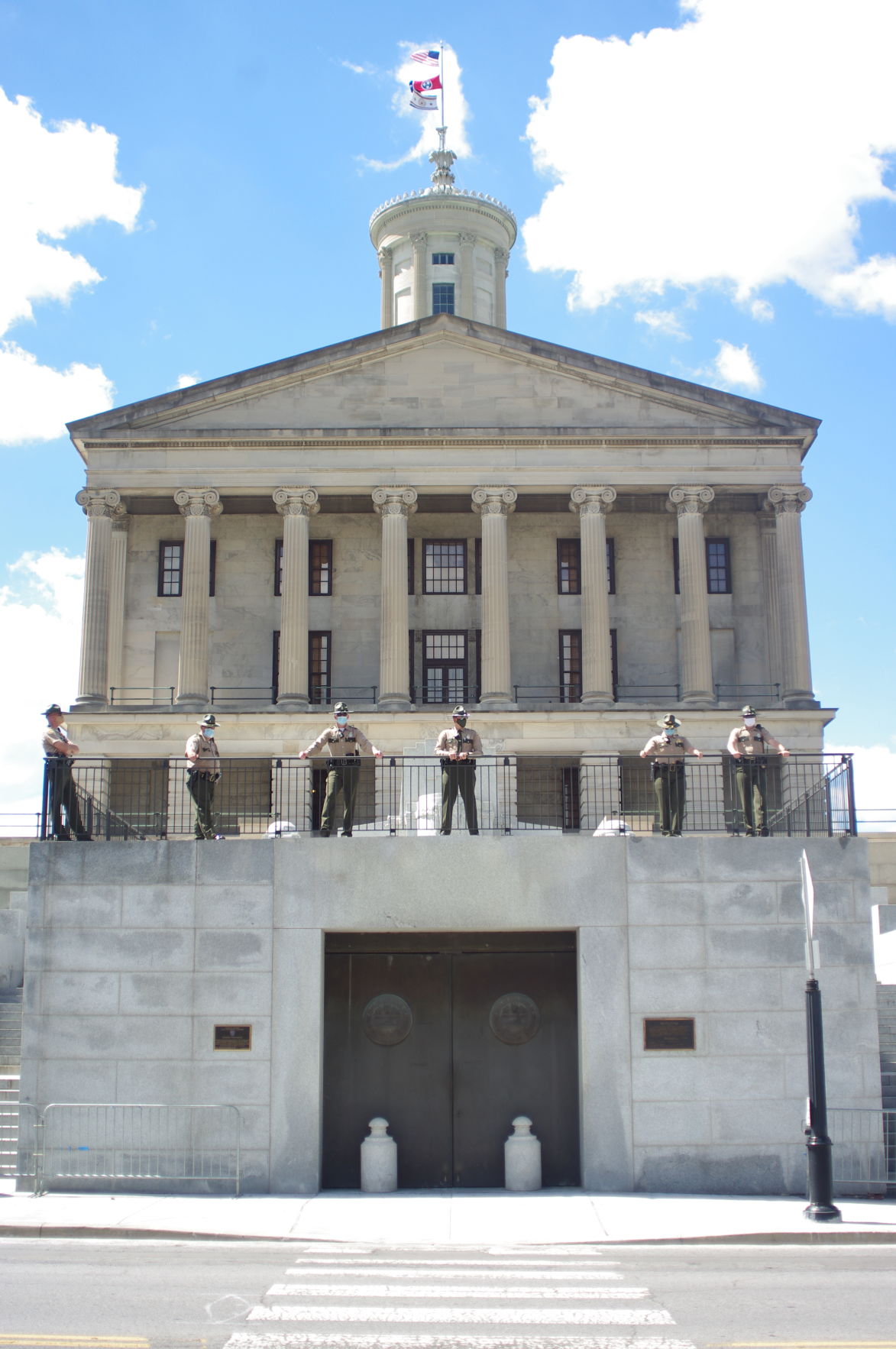 State troopers guard the State Capitol Building as demonstrators continue their sit-in across the street at the Legislative Plaza.

On Friday, activists from across the state made their way to the steps of the State Capitol in Nashville in a push to “reclaim the plaza for the people,” renaming the Legislative Plaza “Ida B. Wells Plaza” in honor of the 1960s civil rights leader.

On Tuesday, following a series of arrests, forced removals from the House Chamber, as well as an ever-increasing presence of police, Franklin activist Angel Stansberry continued to help lead that movement.

Organized by Nashville activist Justin Jones, the sit-in was dubbed “Free Capitol Hill,” with demonstrators proclaiming their intention to occupy the space until granted an audience with Gov. Bill Lee, giving them an opportunity to explain their position on defunding and demilitarizing the police, as well as on the removal of Confederate symbols from the State Capitol.

Friday evening through Monday night, there were no clashes between demonstrators and police.

That would change, however, when at 10:42 p.m. Monday night, a state trooper warned demonstrators that they would be arrested and charged with criminal trespassing were they to not vacate the area by 11 p.m.

Linking together arm by arm, demonstrators refused to leave.

“At 11:10, they didn't do anything; we were there chanting, we had our arms locked, we were swinging back and forth,” Stansberry said. “They waited another 10 minutes and then finally, at 11:30, they were like 'that's it,' and they started pulling people away.”

“With Justin [Emler], they picked him up and they slammed him into his [wheel]chair — his back is all bruised up,” Stansberry said. “Jay Terry has a black eye and bruising on the side of her face from being slammed against the wall. A couple others have bruises from how hard they were holding them.”

Among those being forcibly removed and arrested was Stansberry herself, who said that she and 20 other demonstrators were placed into two separate vans and taken to the Metro Nashville Police Precinct.

After arriving, Stansberry said those arrested were never taken inside the actual precinct, and instead were written citations in the parking lot and allowed to leave within a few hours.

More arrests after demonstrators take to the House Chamber

The next day on Tuesday, Stansberry had returned to the State Capitol to continue to help lead the sit-in.

Shortly after 3 p.m., Democratic State Rep. Mike Stewart approached demonstrators, telling them that up to 25 people would be allowed inside the House Chamber while state leaders voted on a bill that would honor Ashanti Posey, a black teen who was shot and killed in April.

Demonstrators, including Stansberry, soon made their way to the Capitol Building, however, were allegedly told that only ten people would be allowed inside.

As the bill was being discussed by state leaders, it soon became apparent that it would fail in the Republican-controlled State House, with State Rep. William Lamberth (R - Portland) saying he couldn’t support the measure “due to the behavior” of Posey, who had allegedly made a "small marijuana sale" shortly before her death, according to the Metro Nashville Police Department.

As demonstrators began to chant “black lives matter” in the House Chamber, state troopers were soon ordered to remove them.

More injuries would ensure throughout the demonstrators’ removal from the House Chamber, as well as three arrests; Alexander Ratliff, Abigail Barrentine, and the demonstration’s organizer Justin Jones, who in addition to be charged with disruption and resisting arrest as were the other two, was charged with assault and held on a $1,000 bond.

While not arrested, Stansberry, along with the other six remaining protesters, were escorted out of the House Chamber and soon returned to their sit-in across from the State Capitol Building on the Legislative Plaza.

One of those injured during the altercation was Nashville resident Mohamed Gure, who believed he had dislocated his shoulder after a state trooper had pulled him by the arm.

“They started pushing people out, [and] I was the first one to be pulled,” Gure said. “So they pulled me, grabbed my arm — I got knocked on my knee. I think they dislocated my [shoulder].”

While demonstrators worked on getting those arrested out of jail and back to the sit-in, Stansberry helped take charge of the demonstration by giving updates and starting chants via megaphone - all in addition to her assigned duty of handling food, a skill she accrued through her organization Feed the Need Nashville, a nonprofit that feeds the homeless in Nashville every Wednesday.

As the hours went on, Stansberry and her fellow demonstrators continued the sit-in as state troopers looked on in silence from across the street. The sit-in would continue well into the night, with the demonstration still ongoing as of Wednesday.

“This is not just for my children — this is for all children,” Stansberry said.

“I want to make sure that another generation does not have to go through what we’re going through. I would give my life to see little black boys and girls have a better life than this.”

“Coward Lee is still hiding in his castle of sand, and we are still here standing on our rock of truth waiting for him to give us an audience.”