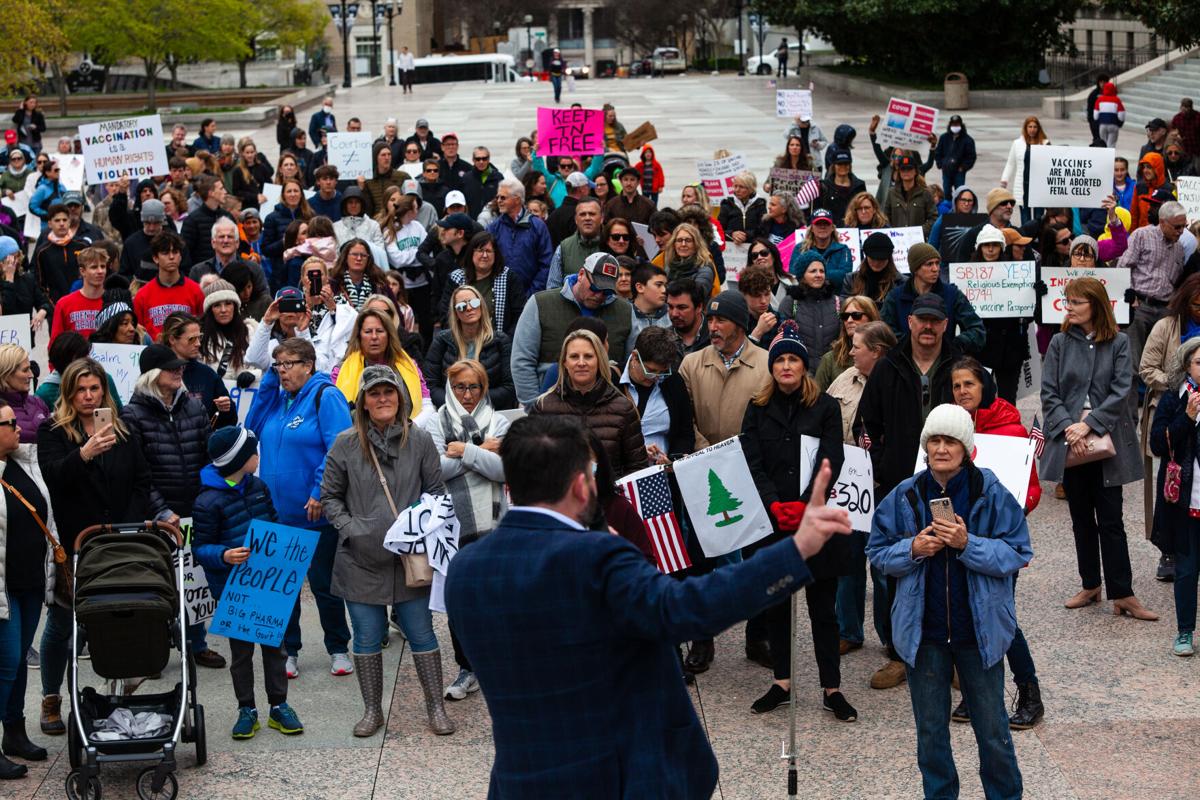 Franklin resident Gary Humble speaks to a crowd of hundreds during the "We the People" rally in Nashville on March 31. 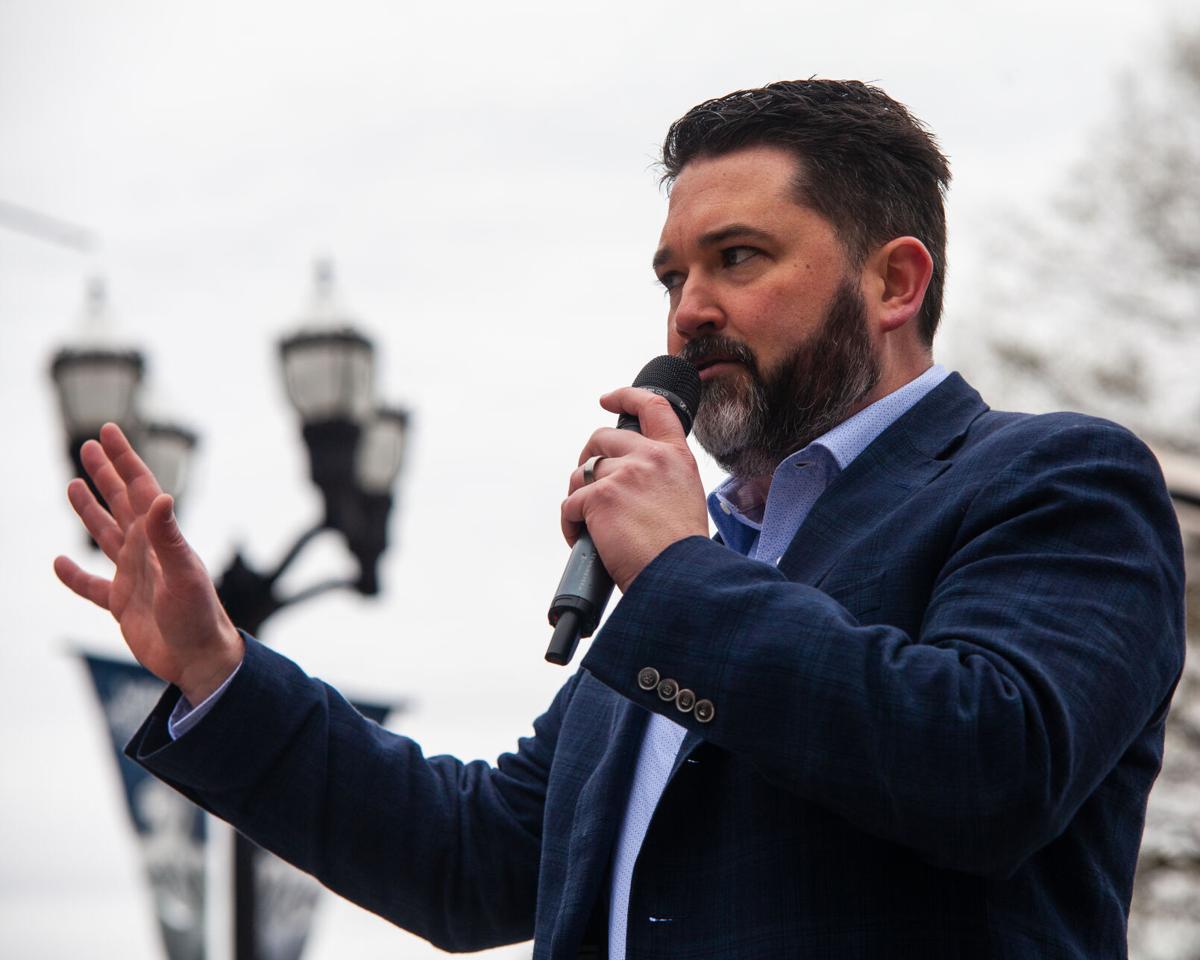 Humble is the founder of two nonprofit organizations - Tennessee Stands and Recall Williamson - that both advocate against mask mandates, among other things. 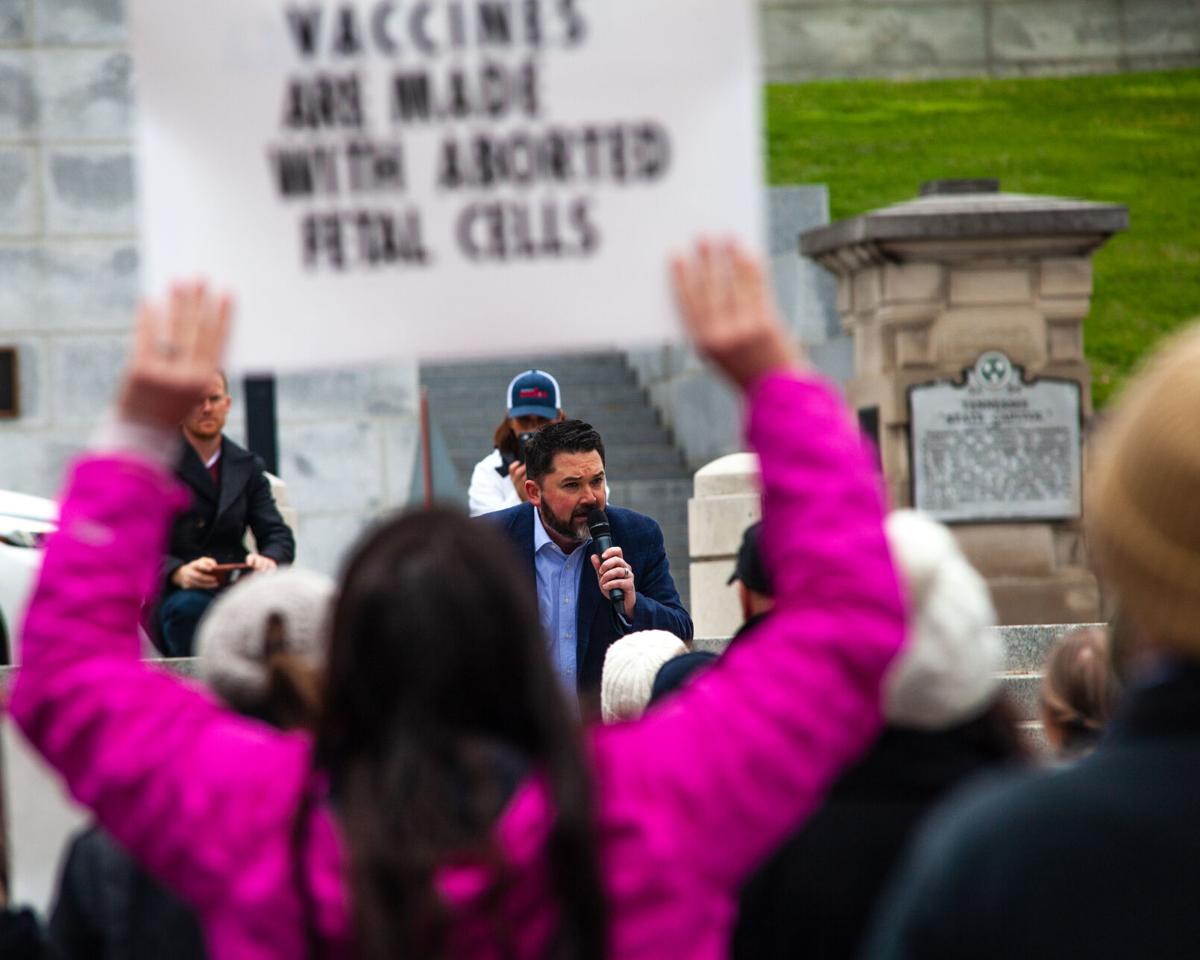 Humble speaks to demonstrators during the March 31 Nashville rally. 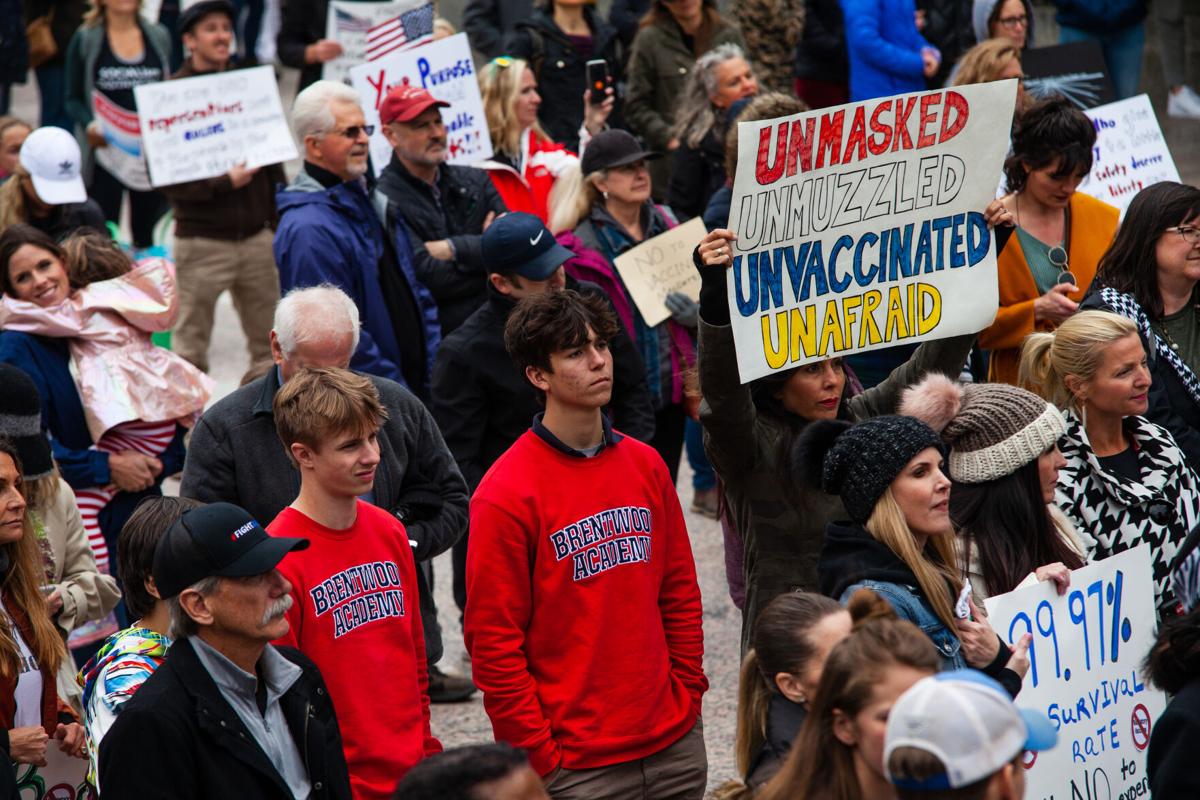 Attendees of the rally included people from Chattanooga, Johnson City, Knoxville, as well as plenty from Nashville and Williamson County. 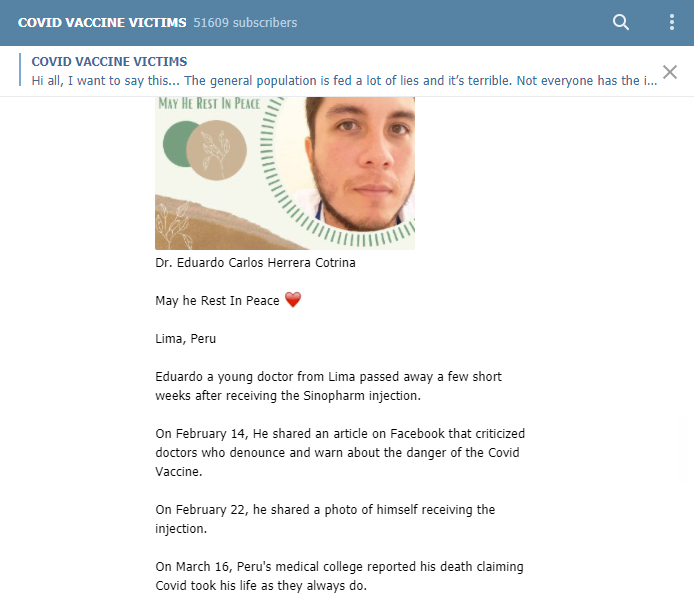 Posted Wednesday night on a Telegram thread titled "COVID Vaccine Victims," the post alleging the Peru doctor to have died from a COVID-19 vaccine without evidence was viewed more than 65,000 times in less than an hour. 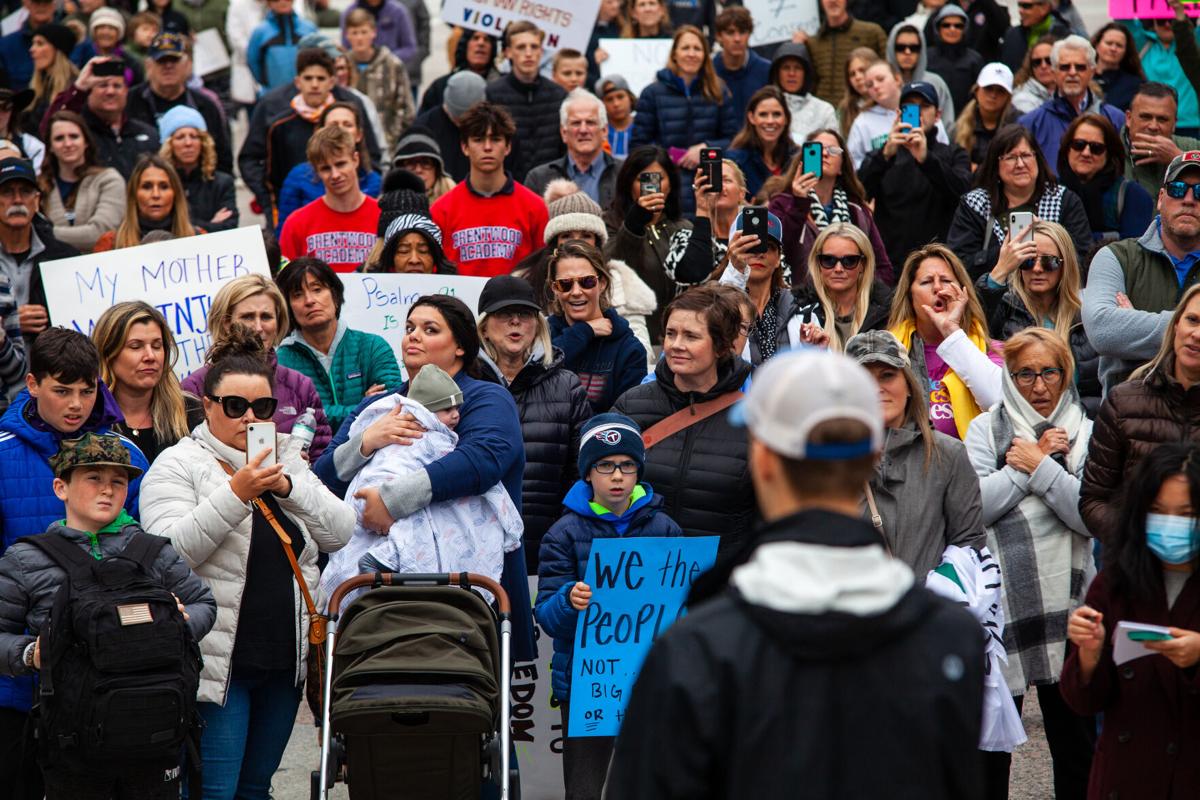 Jack Bratten, a high school senior in Nolensville, speaks at the "We the People" rally. 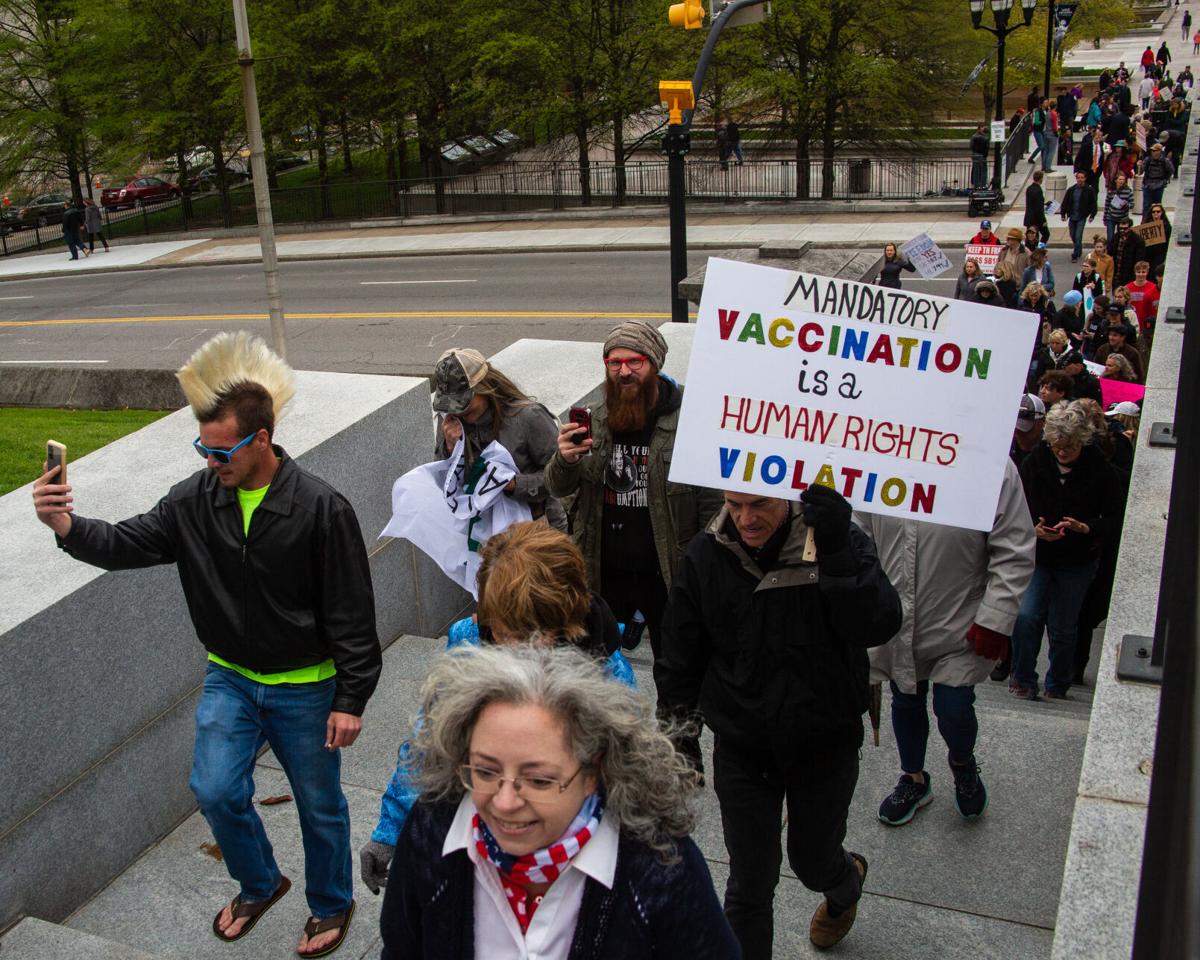 Demonstrators ascend the steps of the Tennessee State Capitol Building. 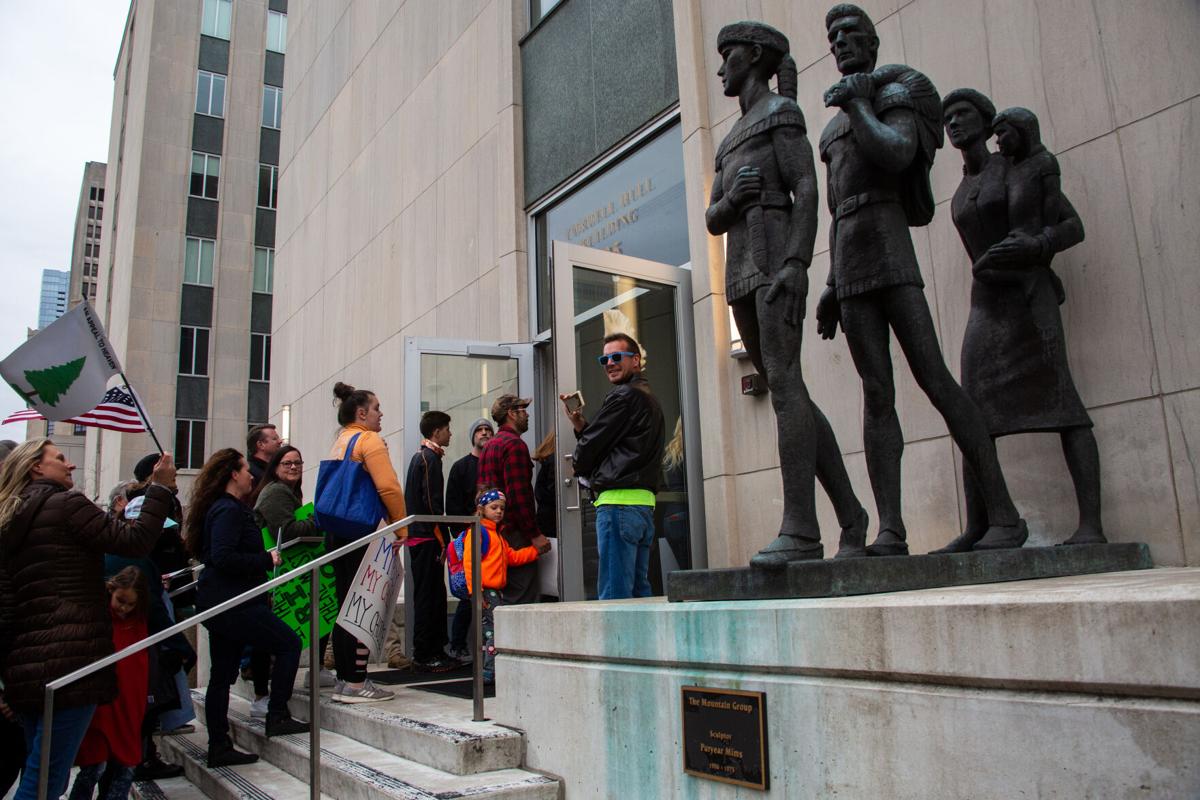 Demonstrators enter the Cordell Hull Building where the Senate Health and Welfare Committee would be hearing Senate Bill 187. 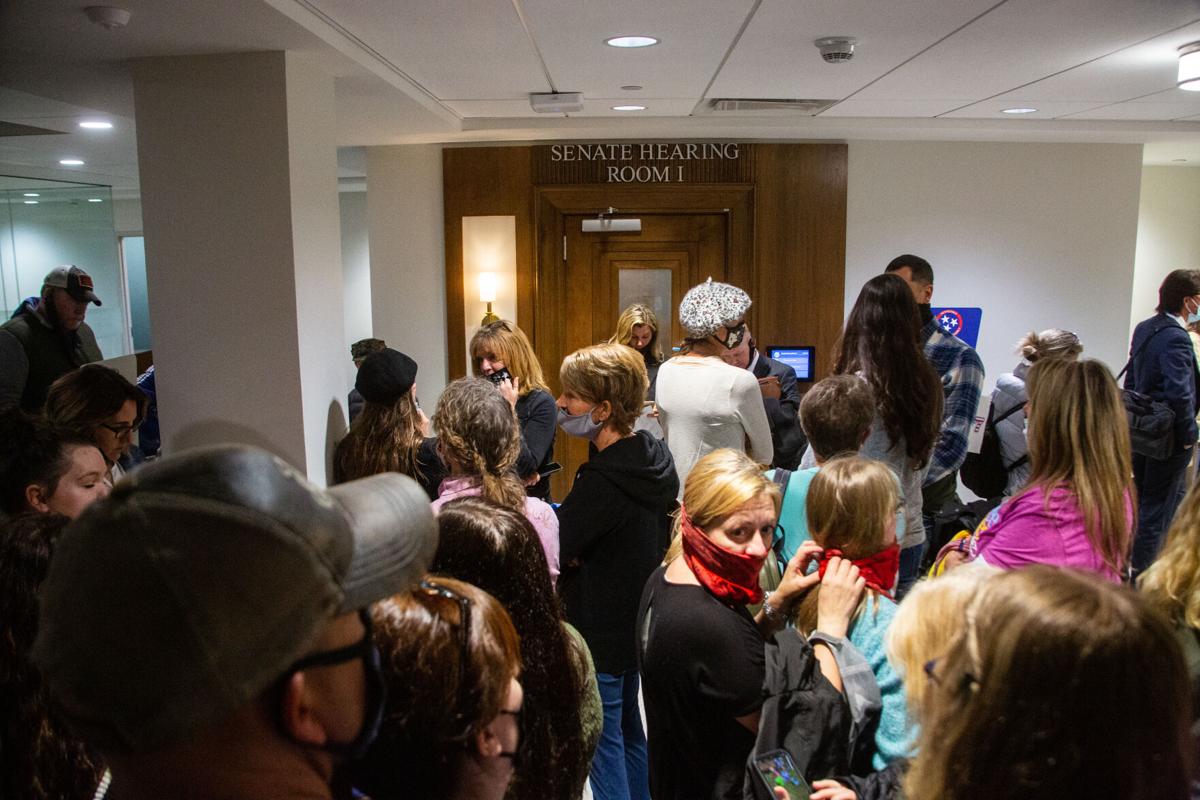 Demonstrators listen to the committee proceedings from just outside the Senate Hearing Room in the Cordell Hull Building.

Hundreds of Tennesseans from Johnson City to Chattanooga gathered at the Legislative Plaza in Nashville on Wednesday to participate in the "We the People" rally, a demonstration in support of a bill that would prohibit any law enforcement or governmental entity from mandating COVID-19 vaccinations.

Demonstrators marched around the Tennessee State Capitol Building to Cordell Hull where a state Senate committee was set to vote on the bill.

Senate Bill 187 was set to be voted on by the Senate Health and Welfare Committee later that afternoon after winning two out of three required passages in the state Senate.

The rally was organized by the group Tennessee Stands, a nonprofit that works to "protect the individual liberty of all Tennesseans" against "lawless executive orders and mandates," according to the group's website. Tennessee Stands, along with its affiliated group Recall Williamson, was founded by 42 year-old Franklin resident Gary Humble.

A former resident of Texas, Humble has led a varied life, having founded a microbrewery in Texas while also previously working as a preacher. It was in the summer of 2020, however, that Humble became more active in organizing against what he considered overreaching policies after he learned of Williamson County Schools' reopening plan.

Humble soon founded Recall Williamson, a nonprofit organization that aims to combat mask mandates at Williamson County schools. The organization filed a lawsuit against WCS in September of 2020 over the school system's mask requirements.

Humble would also go on to found the aforementioned Tennessee Stands, which helped spearheaded the rally on Wednesday that drew hundreds of Tennesseans from across the state.

"Put your name on it"

Humble had arranged for several state representatives to speak at the rally, including state Sen. Mark Pody (R-Lebanon) and state Rep. Bruce Griffey (R-Paris). Before the guest speakers took stage, however, Humble took to the steps of the Legislative Plaza, microphone in hand, and broke down for demonstrators what their purpose was that day.

"All of you know that this bill [will] secure religious exemptions to vaccines and simply say to the state [that they] will not mandate a vaccine to COVID, [something] our governor has said multiple times would not happen," Humble said.

"We are here to ask our legislature to put that in writing. We've been told by Gov. [Bill] Lee several times that Tennessee will not mandate a vaccine for COVID — that's great, put your name on it!"

A wave of cheers erupted throughout the audience who raised signs bearing phrases like "my body, my choice" and "no mandatory vaccines!"

By around 1:45 p.m., hundreds of demonstrators were gathered at the plaza across from the State Capitol Building. Among them was 49 year-old Franklin resident William "Doc" Holladay.

In addition to supporting the bill prohibiting state-mandated vaccinations, Holladay went on to allege that COVID-19 vaccines themselves had caused "many negative reactions" and "lots of deaths immediately or shortly thereafter."

As of March 29, there have been more than 145 million COVID-19 vaccines administered in the United States, with a review by the Centers of Disease Control finding no evidence of a single death being attributable to a COVID-19 vaccine.

Also as of March 29, there have been a total of 2,509 reported deaths of people who received a COVID-19 vaccine, however, through reviewing all available clinical information including death certificates and medical records, the CDC has found no evidence to attribute those deaths to vaccines.

The Home Page asked Holladay what evidence existed to attribute deaths to COVID-19 vaccinations. He pointed to a thread on the instant messaging program Telegram that compiles supposed vaccine-related deaths.

Telegram has been a hotbed for COVID-19 vaccine conspiracy theories, which include its users attributing mass vaccinations to things like depopulation or social control.

One recent post on the Telegram thread Holladay referenced — a post that had been viewed 65,000 times within one hour of its posting — attributed the death of a young Peru doctor, without evidence, to a COVID-19 vaccine he had received weeks earlier, despite his death being attributed by the hospital to the COVID-19 virus itself.

Holladay went on to mirror some Telegram users' concerns over what he suggested could be the true intent of COVID-19 vaccinations.

"Why do we need a vaccine, I mean why do we need the mask if they don't do anything?" Holladay posed. "In most of our minds, this is about compliance rather than ethicality. I think the whole thing has been set up to condition us, to submit."

Before taking stage after Humble's introductory speech, Pody first walked into the maskless crowd of hundreds throwing high-fives to any demonstrator that would throw there hand up.

Most everyone he passed did.

Returning to the plaza steps, with at least one demonstrator encouraging him to "run for president," Pody took a microphone in hand and began to denounce what he considered to be a wave of government overreach.

"It is our body, we are in charge of our own health, we do not need government to tell us what we need to do for our own health — it is ours," Pody said.

"What is more important than you and I making our own health decisions based on the facts and research that we trust, that we do? I don't need to listen to people I don't know; the so-called experts, the so-called people that are smarter than us that do research that we can't trust — we can do our own research! We can find out for ourselves!"

Next in line to speak was Griffey, who took the opportunity to thank demonstrators for their passion in fighting for what they believed in.

"Who misses President Trump about now?" Girffey asked as he took the microphone, the crowd cheering wildly in response.

"I'm just going to say it... the election was stolen. Look, we are at a crossroads in America, we're in a battle for the soul of America right now, and if it wasn't for you, the left would just push things over and we'd turn into a socialist state like China or Russia. If it's not for you, the warriors, that's what would happen to us."

Emphasizing that the rally was not intended to cause a "ruckus," Humble led demonstrators toward the State Capitol Building.

Minutes later, hundreds of demonstrators could be seen ascending the steps of the State Capitol, after which they wrapped around its eastern wall and toward the Cordell Hull Building to watch, in person, the Senate Health and Welfare Committee discuss and vote on the bill.

Later, they were told only 10 would be allowed to enter.

"Shame!" some demonstrators started shouting upon hearing the news. "No guys, not the time," Humble said, quickly shutting down the crowd's vocal response.

Demonstrators who were previously told 35 people could enter the Senate Hearing Room now being told that just 10 can enter. pic.twitter.com/jtlLOQpJQd

With that, Humble and nine other demonstrators were allowed to enter the Senate Hearing Room. State Sen. Janice Bowling, the sponsor of the bill, took to the podium to relay her rationale for the bill to the Senate committee.

"The purpose of this bill is to attempt to assuage the fear in many Tennessee people and to claw back some lost constitutional integrity that is taking place outside the state," Bowling said.

Bowling went on to say that the Moderna and Pfizer vaccines "can be very dangerous to young adults" and that they weren't actually vaccines, but instead a form of "gene therapy" due to them not containing any amount of the COVID-19 virus itself.

A wave of cheers could be heard just outside the Hearing Room's walls in response to Bowling's comments.

To date, there has been no evidence of someone dying due to the Moderna and Pfizer vaccines, or any COVID-19 vaccine for that matter, per the CDC.

There are reports of some vaccine recipients having an allergic reaction — also known as anaphylaxis — to COVID-19 vaccines, though it is extremely rare. Anaphylaxis has occurred in approximately two to five per million vaccinated in the United States.

Regarding Bowling's comments about the Moderna and Pfizer vaccines not being true vaccines but instead a form of gene therapy, that is also contested by the medical community.

The claim was popularized in a January episode of the Wise Tradition podcast in which its host David Martin, who manages a hedge fund and an investment research company, claimed that the Moderna and Pfizer vaccines were actually a form of gene therapy due to their use of mRNA, short for messenger ribonucleic acid.

As opposed to traditional vaccines that equip the body's immune system with the tools to combat a particular virus by injecting a weakened or inactive germ into the body, vaccines that use mRNA instead "teach cells how to make a protein or a piece of a protein." This process is not considered gene therapy because it is "not designed to alter or change your genes in any way," as is typical with gene therapy.

"All of these vaccines that have been introduced really are vaccines; they're preventive, they're not treatment for the disease and I think by standard definitions they are definitely not gene therapy — that can really scare folks unnecessarily," Jones said.

Unconvinced, Bowling stood by her claims to the cheers of demonstrators just outside the Hearing Room's walls.

"I verily say to you I disagree with just about everything you said based on discussions with doctors — I'm certainly not one and you can realize that real quickly — but, from what I have studied and talked with doctors about, I think that difference is part of the issue," Bowling said.

"These shots, if people choose not to take them, that is their God-given and constitutionally-protected right."

Ultimately, the nine-member committee voted 8-1 to recommend the bill for passage, sending the bill to be voted on by the state Senate for a third and final time before being sent to Lee's desk.

Humble, along with the nine other demonstrators, exited the Hearing Room to a crowd cheering ecstatically, joining together with chants of "USA!

"I'm excited for what happened," Humble told the remaining group of demonstrators. "There's still a vote on the floor, it still has to go to the House, so there's a lot to do."