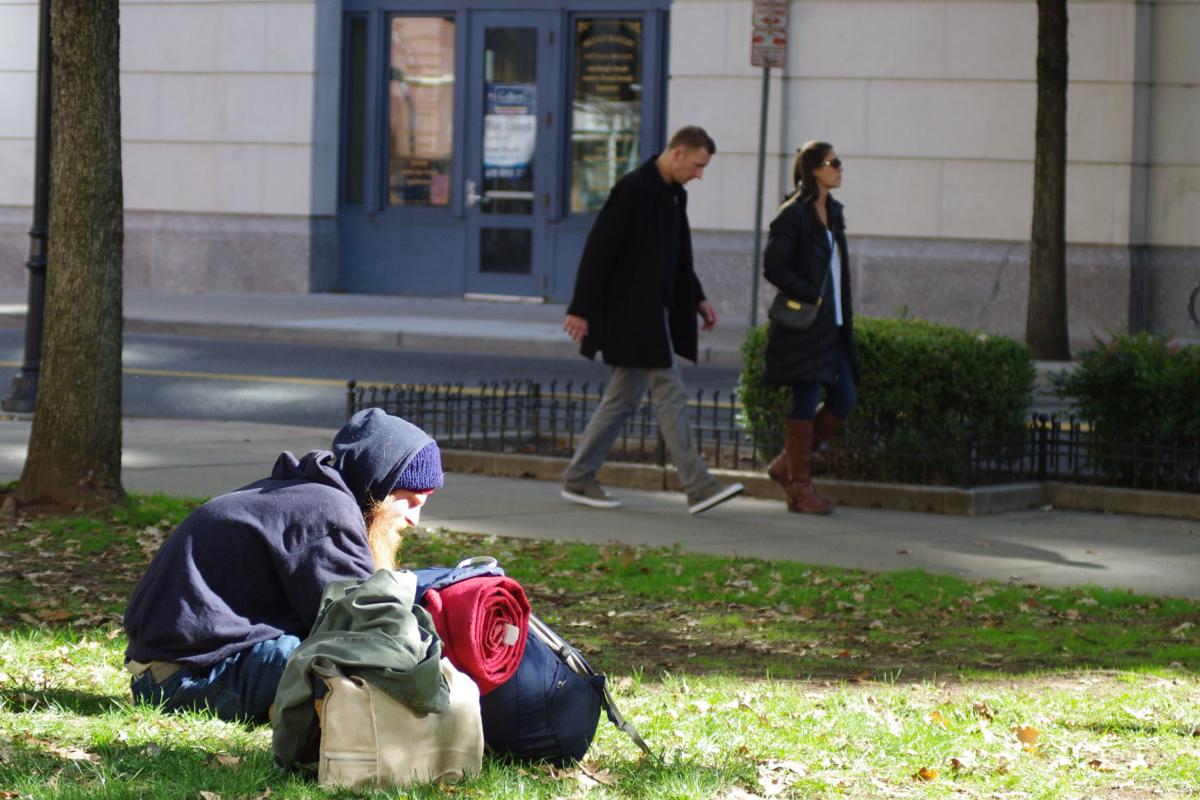 Lawrence Gilbert sits at Church Street Park after having eaten a meal provided by Feed the Need Nashville. 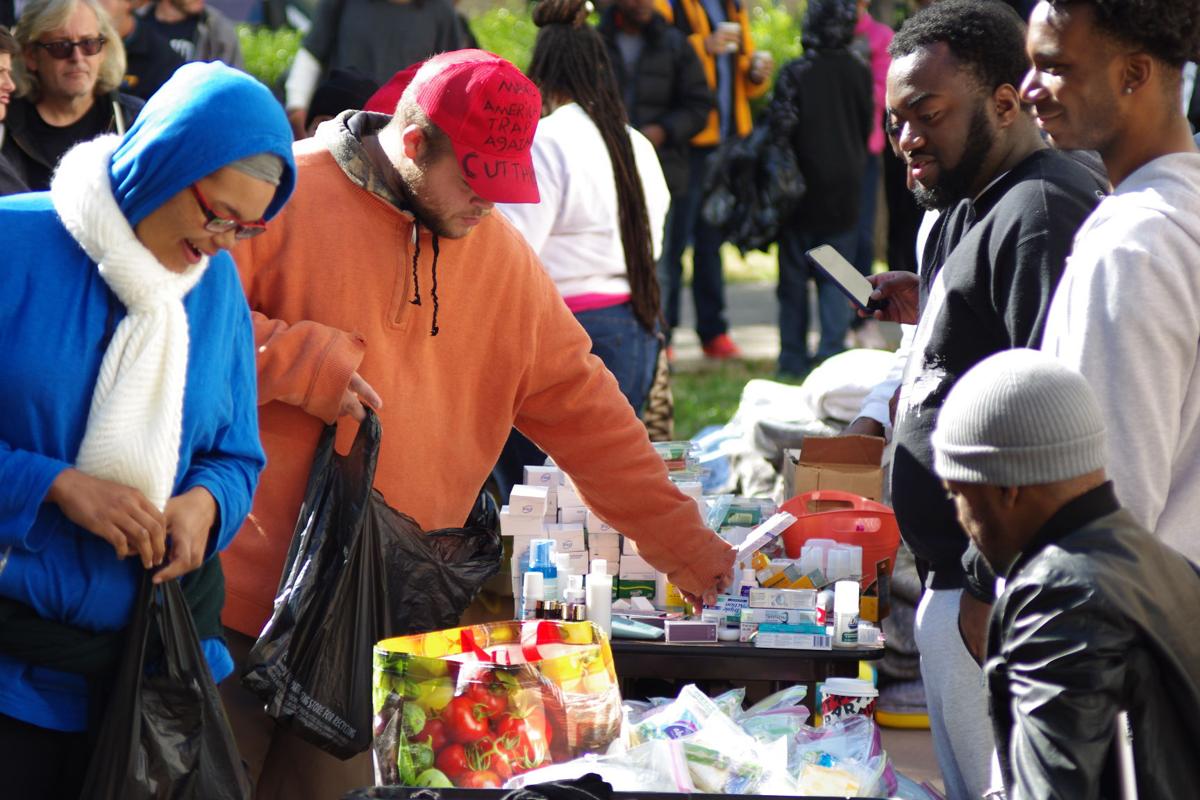 Those in need grab assorted toiletries during the "Winter Prep for the Homeless" event on Saturday. 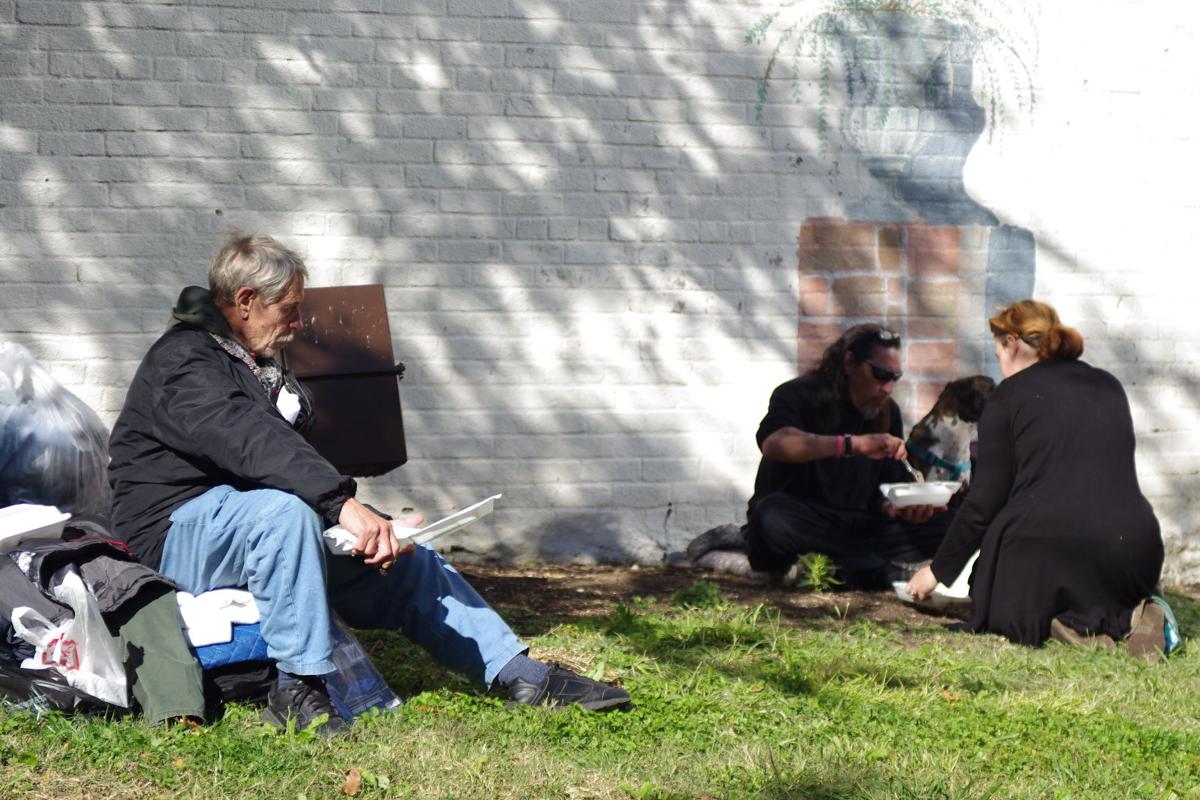 To help prepare those unfortunate enough to be living on the streets for the upcoming winter, multiple local nonprofits joined together Saturday to hold “Winter Prep for the Homeless” — a charitable event where volunteers hand out jackets, gloves and blankets, give haircuts, hot food and beverages and even help those in need obtain an ID.

“What we're doing here is basically prepping the homeless for the winter,” said Mirasol Espinesen, founder of Helping Unhoused Brothers and Sisters (HUBS), the nonprofit who organized the event. “Multiple organizations got together to provide food, drinks, winter apparel, toiletries, shoes... anything they could possibly need when they're out there.”

Held at Church Street Park in Nashville, hundreds of Middle Tennessee's people experiencing homelessness lined to pick up winter apparel, or to grab a hot meal and beverage.

Nashville’s emergency shelters — which are the only shelters available to many of Williamson County’s homeless population — were previously announced to not be opening for the 2019 winter due to a lack of funding. After public outcry, Nashville Mayor John Cooper reinstated the city’s emergency shelter program the very next day.

Despite the program returning, however, Espinesen argued that still isn’t enough.

“It's not adequate — we need another shelter that fits at least 300 more people, and that's not even enough,” Espinesen said. “We have people living in the woods, under the bridges, we have people on these benches here at the parks, and we want to help them.”

Nashville officials stated in 2018 they had identified approximately 2,300 homeless people within the city, though advocacy groups estimate that number to be closer to 20,000. While data on the homeless population in Williamson County is scarce, Franklin Community Church Pastor Kevin Riggs — who helped launch the county’s first emergency shelter — has estimated there to be between 750 and 1,000 homeless people living within the county.

Among the thousands of homeless people living in the greater-Nashville area is Clarissa Hyes, who, after being homeless since 2010, now sleeps at a Nashville boarding house as of Nov. 1. Hyes came to the event Saturday not to grab a coat and a meal, but instead to help event organizers, who she said had helped her get off the streets after sleeping on the pavement for years.

Hyes said she had been volunteering for HUBS for nearly a decade, and now that she doesn’t have to worry about where she’ll sleep on any particular night, will be able to help HUBS even more.

“It's just hurtful to see people out here dying,” Hyes said. “I just lost one of my best friends shooting up heroin... I cried my eyes out. I don't want to see none of my friends out here.”

Another organization providing help at the event was BLACK Inc., who after handing out meals to the needy nearby during an unrelated event, saw and learned of HUBS mission and rallied to support.

“Today we actually were handing out sandwiches feeding the homeless, and we just so happen to stumble across this event and were like, 'how can we help out,'" said BLACK Inc. Vice President Terrell Cowan. “My purpose in life is to help others, and I love to help the community the best way I can. Our motto at Tennessee State University is, 'think, work, serve,' and I plan to do that throughout my life.”

“They don't understand, to build your country up, you want to start with your weakest link,” said Keenan Whitieng, President of BLACK Inc. “If you help your weakest link and make them stronger, then the country as a whole becomes stronger... I don't think they understand that.”

HUBS is continuing to hold events to help the homeless throughout the year, particularly in the coming months as temperatures continue to drop. Those interested in donating jackets, sleeping bags or funds to their mission are encouraged to visit the HUBS website by clicking here.