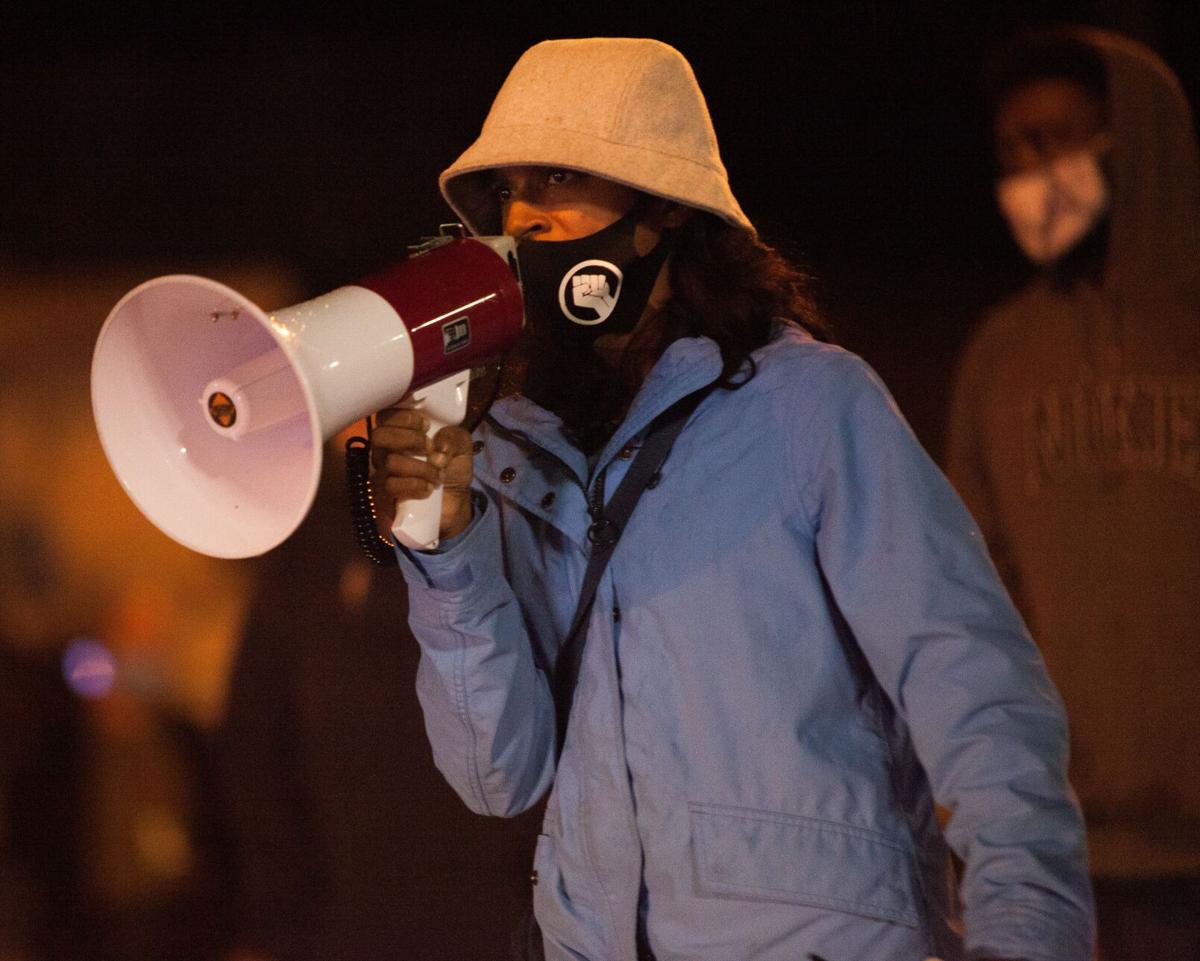 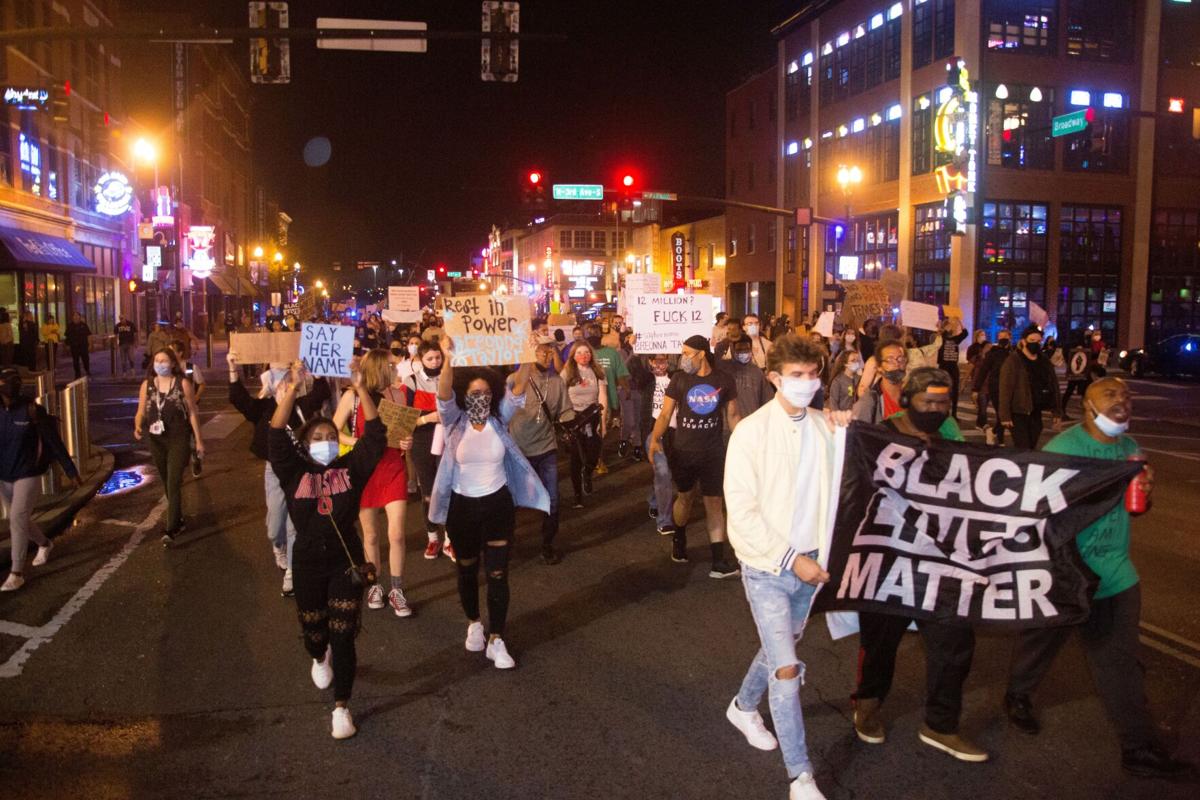 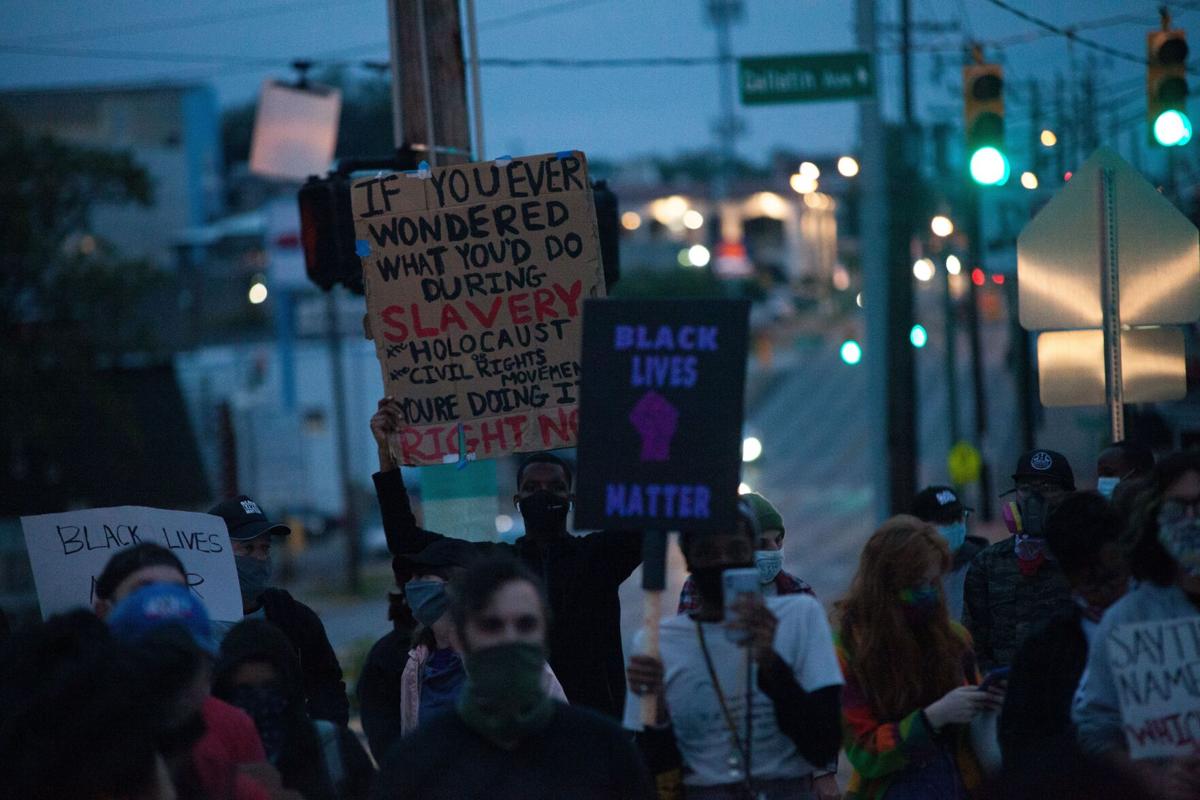 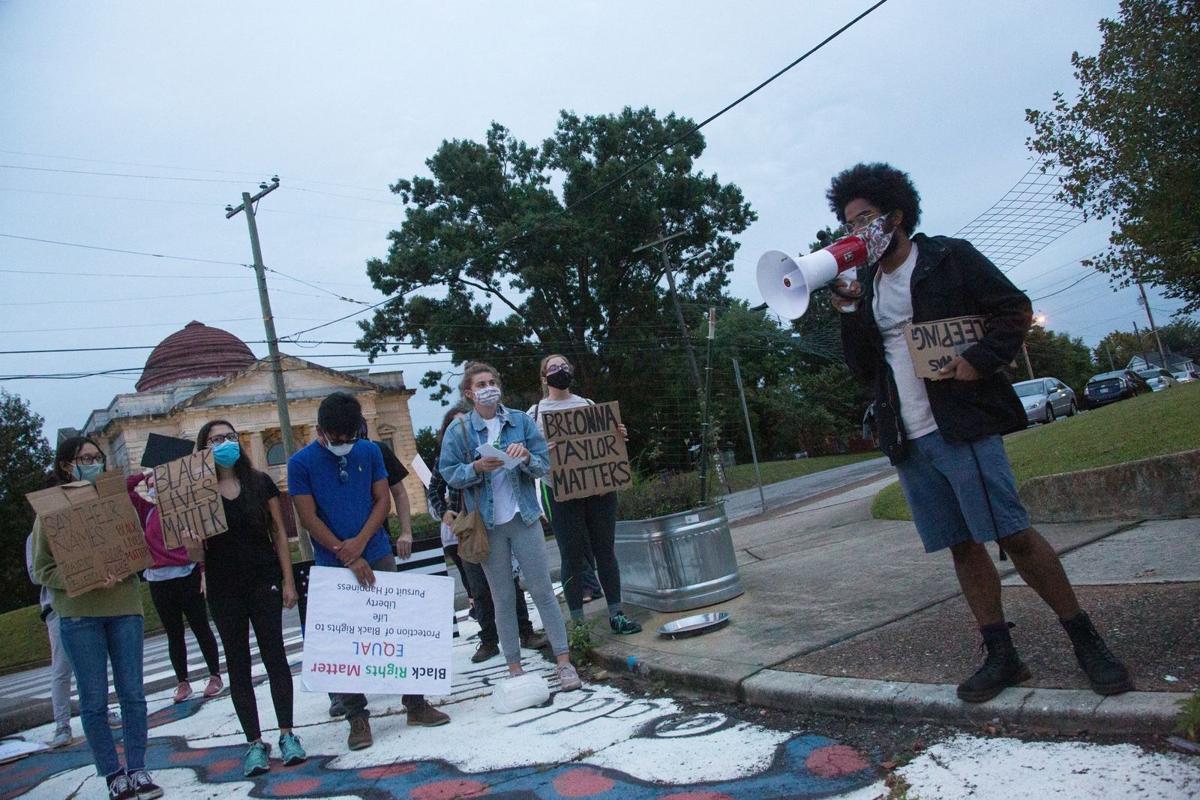 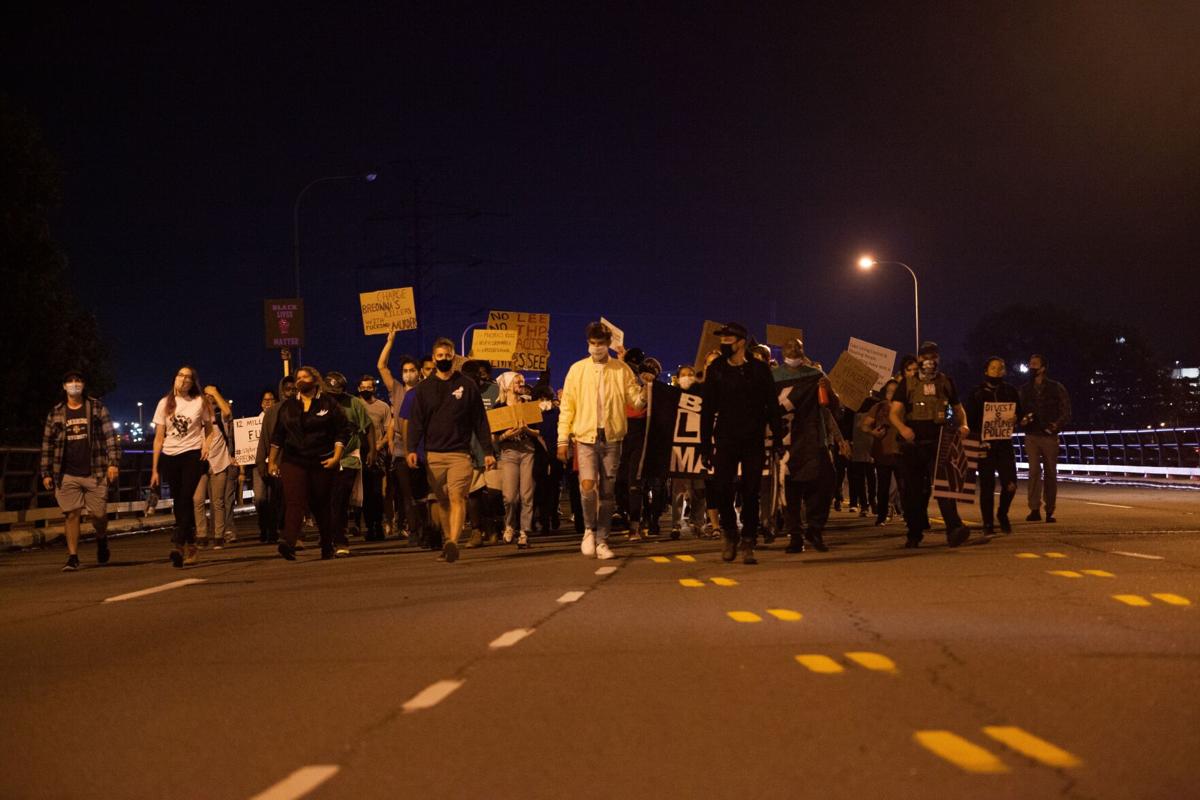 Protesters march across the Cumberland River towards Broadway. 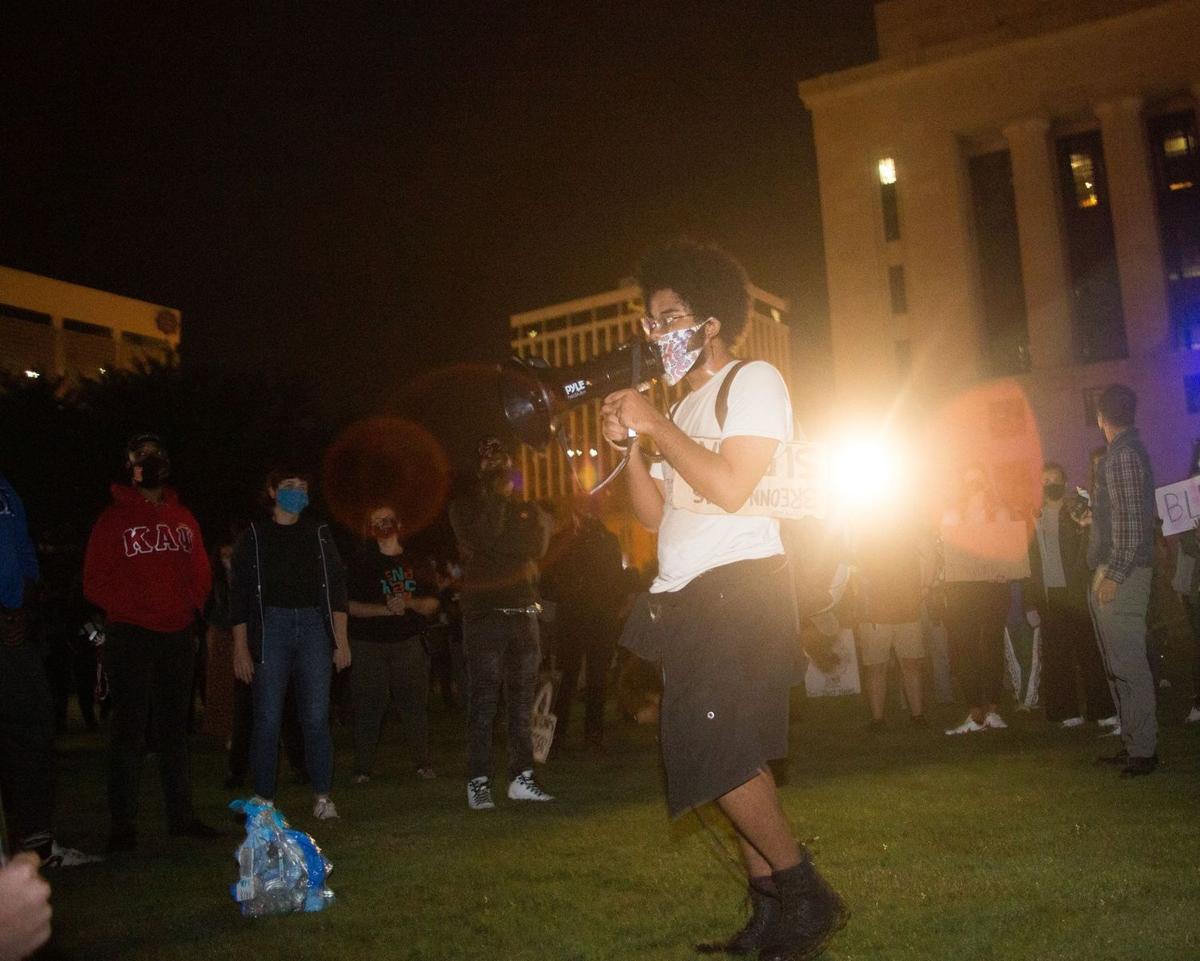 Gabriel Baden speaks with protesters on the grounds of the Metro Nashville Courthouse. 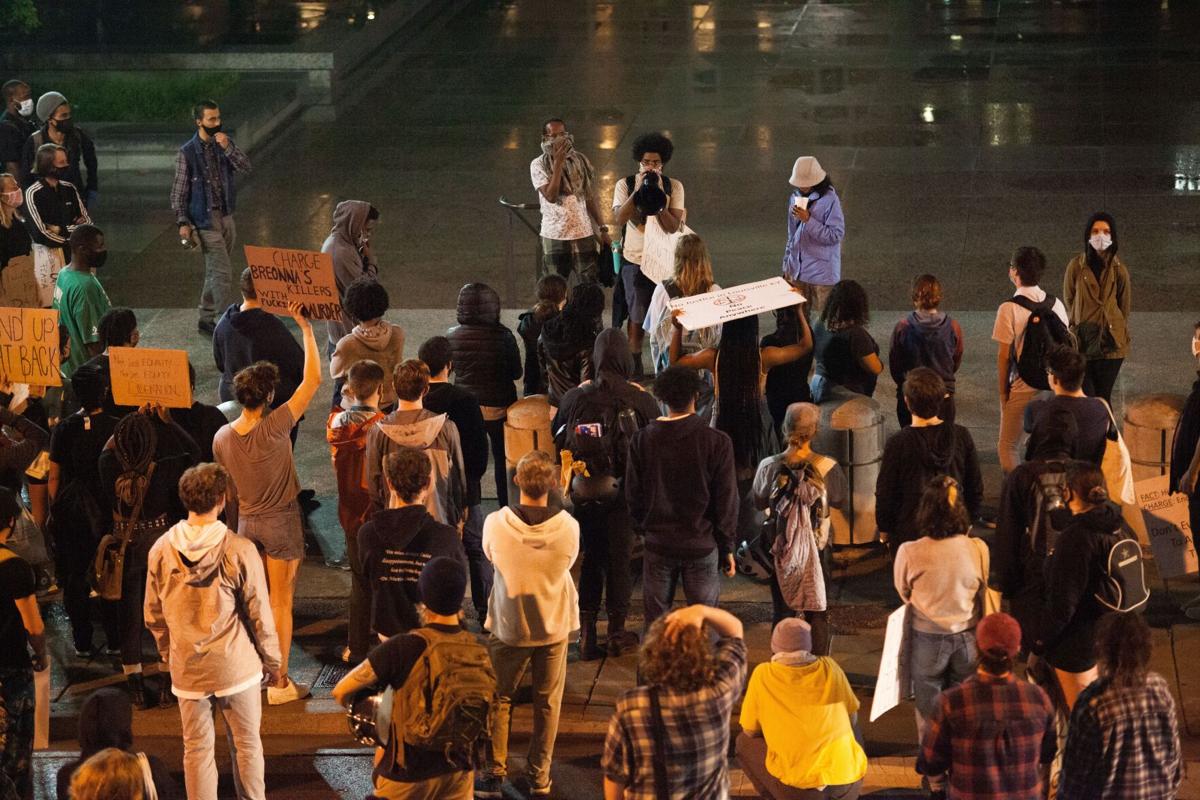 Angel Stansberry (right, in blue) stands alongside Gabriel Baden during the September 23 protest. 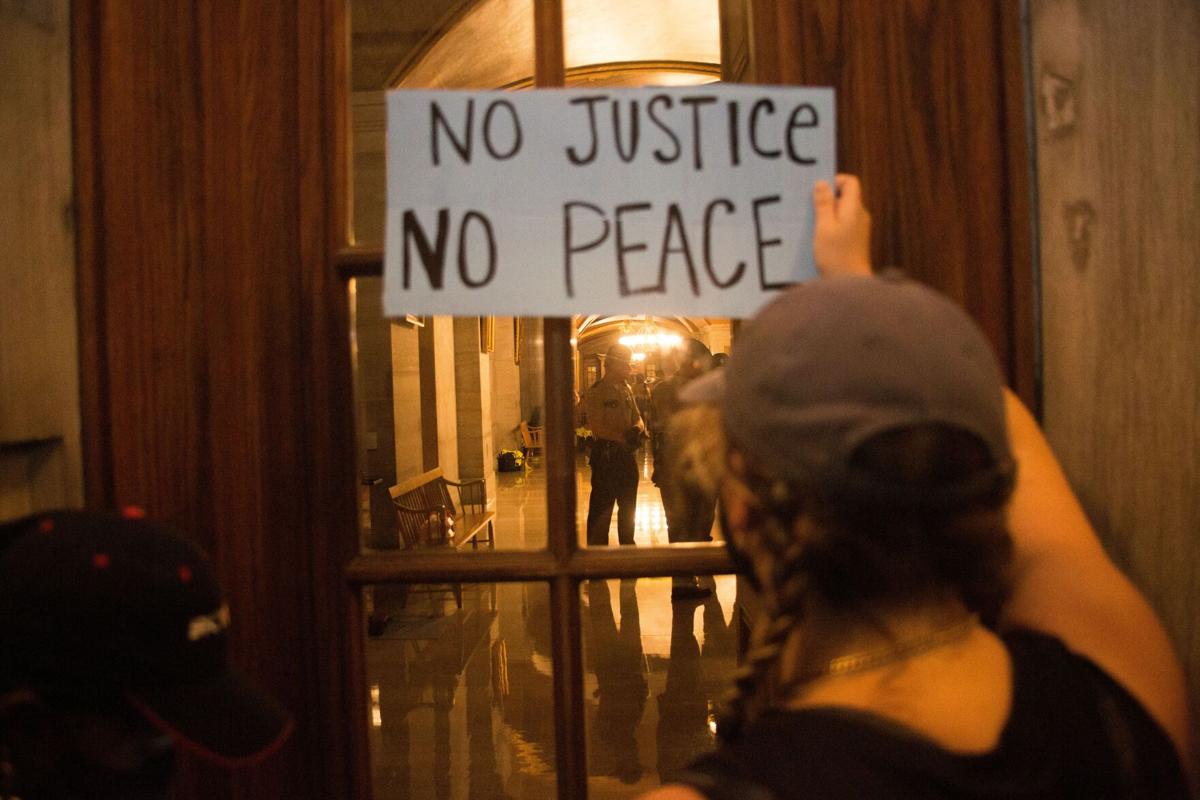 A protester holds a sign up to the front door of the State Capitol Building.

"No justice, no peace! Breonna was asleep!"

The chants of protesters could be heard all across Nashville Wednesday night, with hundreds marching down the streets of East Nashville, down Broadway and around the State Capitol Building.

Spurred on by the grand jury decision to not charge the officers involved in the death of Kentuckian Breonna Taylor with murder, the march was led in part by Franklin resident and activist Angel Stansberry, who helped launch the Capitol Hill takeover back in June.

The killing of Breonna Taylor

An ER technician at the University of Louisville Health, Taylor was shot and killed on March 13 by three Louisville Police officers who were serving a no-knock warrant on her apartment.

The forced entry by police was part of a drug investigation, with police believing that Taylor's apartment, which she shared with her boyfriend Kenneth Walker, was receiving drug packages. Walker opened fire on the intruders and has maintained that police did not identify themselves during the forced entry.

In return, police returned fire, unloading more than 20 shots in the apartment. While Walker survived, Taylor was pronounced dead at the scene after being struck five times.

No drugs were ever found in the apartment.

It was on Wednesday that a state grand jury indicted one of the officers with endangerment. The lack of murder, manslaughter or any charges directly related to Taylor's killing is what sparked civil unrest not only in Louisville, but across the country.

"The era of complacency is coming to an end"

Assembling at the Nashville Public Library off of Main Street, demonstrators first marched up and down the neighborhood streets of East Nashville from 6-8 p.m.

"Out of your house and into the streets," shouted protesters as they marched down the suburban neighborhood streets, the occasional homeowner stepping out on their front porch to view the commotion.

After a few hours in East Nashville, protesters gathered at the Library to share a few words before marching towards Broadway.

Gabriel Baden, a resident of Nashville and friend of Stansberry, said that the mere fact that people from as far as Franklin would venture out all the way to Nashville on a Wednesday night to protest signaled the "era of complacency coming to an end."

"[The fact that people would come all the way from Williamson County to protest] just sends an overall message that the era of complacency is coming to an end," Baden said. "We're starting to see young people everywhere who are just not taking it anymore, and we're starting to see the fruits of that."

Stansberry, who joined up with protesters later at the State Capitol Building, spoke to her frustrations with the criminal justice system in light of the lack of charges against the Louisville officers.

"My anger and frustration at this criminal injustice system is what brought me here — I kind of knew that it was not going to be good when they announced there was going to be a state of emergency, but this is heartbreaking," Stansberry said.

Marching east on Main Street, protesters chanted for miles as they headed towards Broadway.

"One, we are the people! Two, a little bit louder! Three, we want justice for Breonna Taylor!"

Almost at their destination, protesters gathered  on the grounds of the Nashville Metro Courthouse where Baden shared a few more words.

Baden continued, his voice getting louder.

"This is the last time one of my brothers and sisters dies for doing nothing! We're going to let Bill Lee, who has ignored us for months now, know exactly how tired we are. Marsha Blackburn is going to know how tired we are today."

Broadway and the State Capitol Building

It was from the Metro Nashville Courthouse that protesters started their march on Broadway, marching south down 2nd Avenue. Musicians could still be heard performing as protesters flooded the streets outside the back-to-back bars.

All the while, the Metro Nashville Police Department had been keeping traffic under control, following the protesters on their trek down Broadway.

Upon reaching Broadway, protesters could be seen in the street from sidewalk to sidewalk, shouting chants and demanding justice for Taylor.

"Say her name," protesters shouted. "Breonna Taylor! Who shuts shit down? We shut shit down!"

Not long after, protesters were soon surrounding the State Capitol Building, with a dozen or so pressing themselves up against the wooden front doors. Tennessee State Troopers could be seen inside mobilizing and speaking with each other.

After a march around the State Capitol Building, protesters left the building's steps and congregated at the street below, right in front of the Legislative Plaza.

"Here we go with this state-sanctioned violence again, where the only one who gets justice is a white neighbor who never even got shot," Stansberry said to the group of protesters via megaphone, referencing the fact that the endangerment charge levied on one of the officers stemmed from a stray bullet damaging a white neighbor's apartment.

"I know all of you share my anger and frustration; we kind of knew what was going to happen."

Down the street from Stansberry and the protesters were two parked police vehicles. Stansberry turned to face them, and directed her next string of comments towards them.

"Who's the next name we're going to chant, is it going to be my cousin in Atlanta," Stansberry rhetorically asked the police.

"I've got a whole bunch of African American family in Atlanta, who we have to tell the teenagers that they can't even leave the house after dark now — not because of any other threat but these boys in blue. So who polices the police?"

Not long after, Stansberry led protesters back on the three-mile trek back to the library, leading chants the entire way.

Upon returning to the library, Stansberry shared one last plea with her fellow protesters: to join her Saturday for a "March for Justice" demonstration. That march will begin Saturday at 4 p.m. at the Legislative Plaza — a march that Stansberry "heavily encouraged" her fellow Williamson County residents to join.