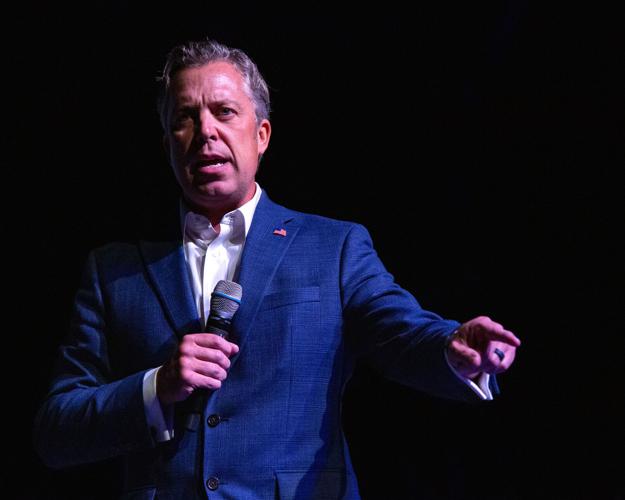 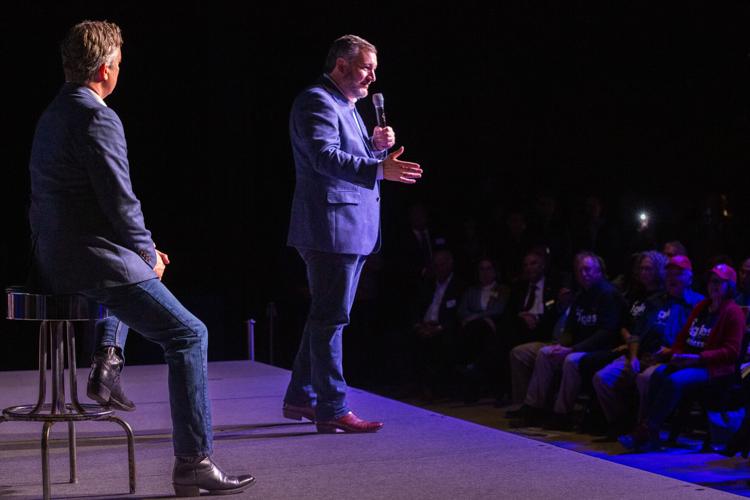 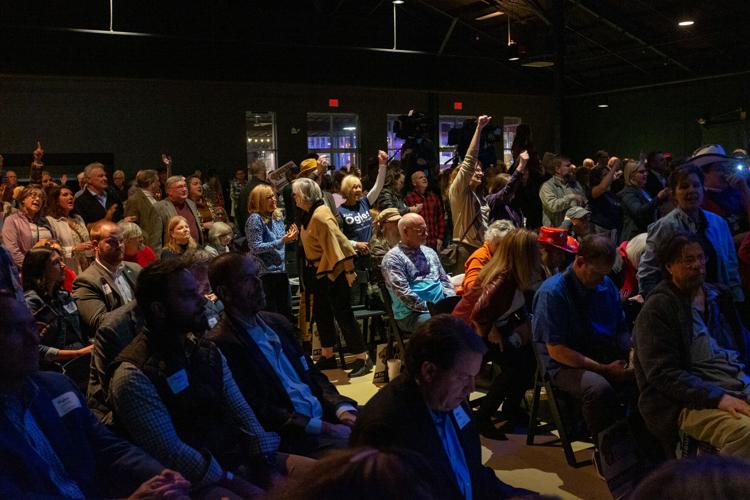 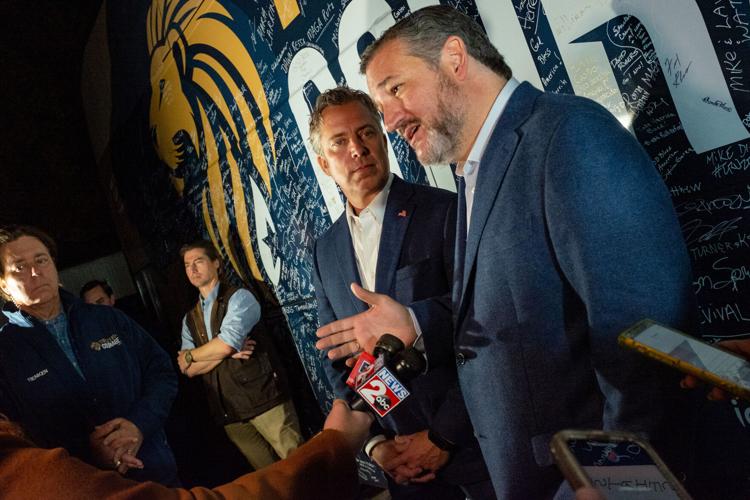 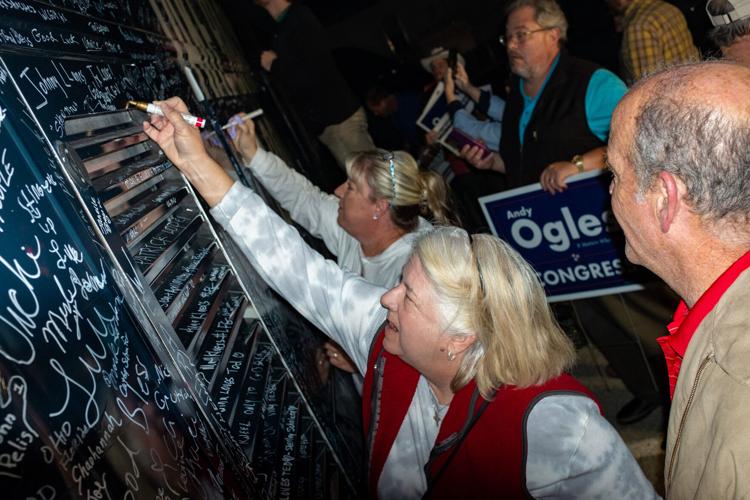 Voters and Republican Party supporters sign the "Take Back America" bus on Oct. 26, 2022, in Franklin.

A version of this story ran in our sister publication the Nashville Scene.

In a roughly 15-minute address, Ogles led with inflammatory comments about transgender athletes and rued America’s weakness, citing imminent geopolitical threats from Russia, China and Saudi Arabia. He blamed drug overdoses across the country on an insufficiently militarized border and fentanyl from China, which he cast as an act of war, directing blame toward Secretary of Homeland Security Alejandro Mayorkas.

Ogles told the crowd he would take action against Nancy Pelosi, Joe Biden and Kamala Harris. “This woke administration has weaponized the FBI and IRS,” Ogles told the crowd. “To the IRS agents — 87,000 — you better freshen up your résumé, because you’re fired.”

Once an essential Republican talking point, abortion access — left unprotected by the Supreme Court’s overturning of Roe v. Wade in June — wasn’t mentioned a single time by any speaker. Before introducing Cruz, Ogles wrapped his remarks with messaging that reflected his campaign stump speech. “Sometimes you got to bring salt and pour it on the wounds to remind people where we went astray,” he told the crowd.

Cruz’s opening targeted the cognitive abilities of Biden and Harris. “Every single thing they do is wrong,” said Cruz. The rest of his speech focused on inflation, which he illustrated via hypothetical anecdotes that referenced recent cultural lightning rods in conservative media. “It is so bad, Antifa can’t afford rent — it is so bad, Hunter Biden can’t afford crack cocaine,” said Cruz, to raucous laughter. “Revival is coming. And I believe that with all of my heart.”

The event opened to “God Bless the USA,” followed by the Pledge of Allegiance led by state GOP Chairman Scott Golden and the “Star-Spangled Banner” performed live by Christian singer Gary Chapman. Mark Green, the sitting representative for Tennessee’s 7th Congressional District, led a prayer that focused on protecting veterans and the Constitution and conferred a special blessing on Ogles’ campaign. Green was followed by conservative commentators Ben Ferguson, who is joining Ted Cruz on the Truth and Courage tour, and Clay Travis, who lives in Franklin.

In a conference call last week, Trump said that Ogles is “America First all the way, he’s MAGA all the way, 100%,” with Trump calling Ogles’ opponent Heidi Campbell a “far-left extremist.”

Campbell, whose recent FEC filings show a spending edge over Ogles, preempted the event with a press release. In recent months, Campbell has focused her campaign on Ogles' opposition to reproductive rights and fundamental government-funded programs.

"Both MAGA Republicans [Cruz and Ogles] pledge to cut Social Security benefits and opposed legislation that lowers health costs," her statement reads in part. “Andy Ogles and Ted Cruz have told us what they will do with power: they’re going to cut Social Security benefits and increase the cost of prescription drugs for Tennessee seniors — all to give giant corporations and billionaires another tax break. In Congress, I’ll be a leader who takes on the CEOs price-gouging our families and who strengthens our healthcare and retirement programs.”

“Revival is coming,” Cruz said to the crowd with the presence of a preacher, saying that, “America is in greater jeopardy than we ever have been.”

Cruz pointed to Ogles’ response to the pandemic as his strength as a candidate and party leader.

“I think we will look back years from now and wonder at the collective insanity that overtook this country,” Cruz said, citing lower test scores from students following the first year of the pandemic.

Ogles said that “we are at a crossroads,” and called the Biden administration a “criminal enterprise that’s destroying our nation” that is “trying to poison our children.”

Some attendees went further with their rhetoric, calling President Biden a “traitor” and shouting out calls for U.S. Speaker of the House Nancy Pelosi and U.S. Senate Majority Leader Chuck Schumer to be sent to the U.S. Guantanamo Bay Detention Camp prison which has jailed suspected terrorists without due process for 20 years and been the site of torture.

When asked during a post-event press conference what Republicans should do to combat extremism within their party, Sen. Cruz deflected, responding, “extremism we’re seeing in Washington is all coming from the Democrat party,” then blaming “the corporate media” and offering a non-answer to the question.

Sen. Cruz walked away ending the press conference, refusing to specifically address moderate Republicans who may be concerned with extremism from within the GOP ranks and base.

Last week, Tenn. Sen. Marsha Blackburn, Sen. Johnson and House Majority Leader William Lamberth were joined by other elected officials at Nashville’s Legislative Plaza where they spoke at the Daily Wire’s “Rally to End Child Mutilation,” which saw the presence of several members of the Proud Boys, an American far-right group that has been labeled terrorists by the governments of Canada and New Zealand.

Among the hundreds of attendees were Williamson County residents Dave and Michelle Robeson, who said that Ogles has earned their vote.

Fellow Williamson County residents Amber and Steve Hertstein said that they are concerned about their children and what they’re exposed to in school, which have in part motivated their engagement in politics during this election cycle.

Hertstein said that she wasn’t politically engaged until the 2016 election, casting a reluctant vote for Donald Trump which she said was really a vote against Hillary Clinton.

“When I went to the polls, I said, ‘Oh my God, I’m voting for Trump. What am I doing?” Hertstein said, adding that she began following then President Trump, his words and his actions.

Now, Hertstein, a California transplant, is all in for Trump, sporting a long sleeved white shirt that read “Yes, I’m a Trump girl, get over it,” and, “We are Q,” a slogan of the fringe element QAnon.

“Especially coming out here and being surrounded by people finally who believe the same things that we did; I was in an environment where I could speak freely and talk to other people about it, and now, I’m a Trump girl — I mean I freaking love President Trump.”

Hertstein said that she sees many non-supporters and young people as “being brainwashed,” something that she said “terrifies” her.

Early voting continues through Nov. 3 for the Nov. 8 general election.