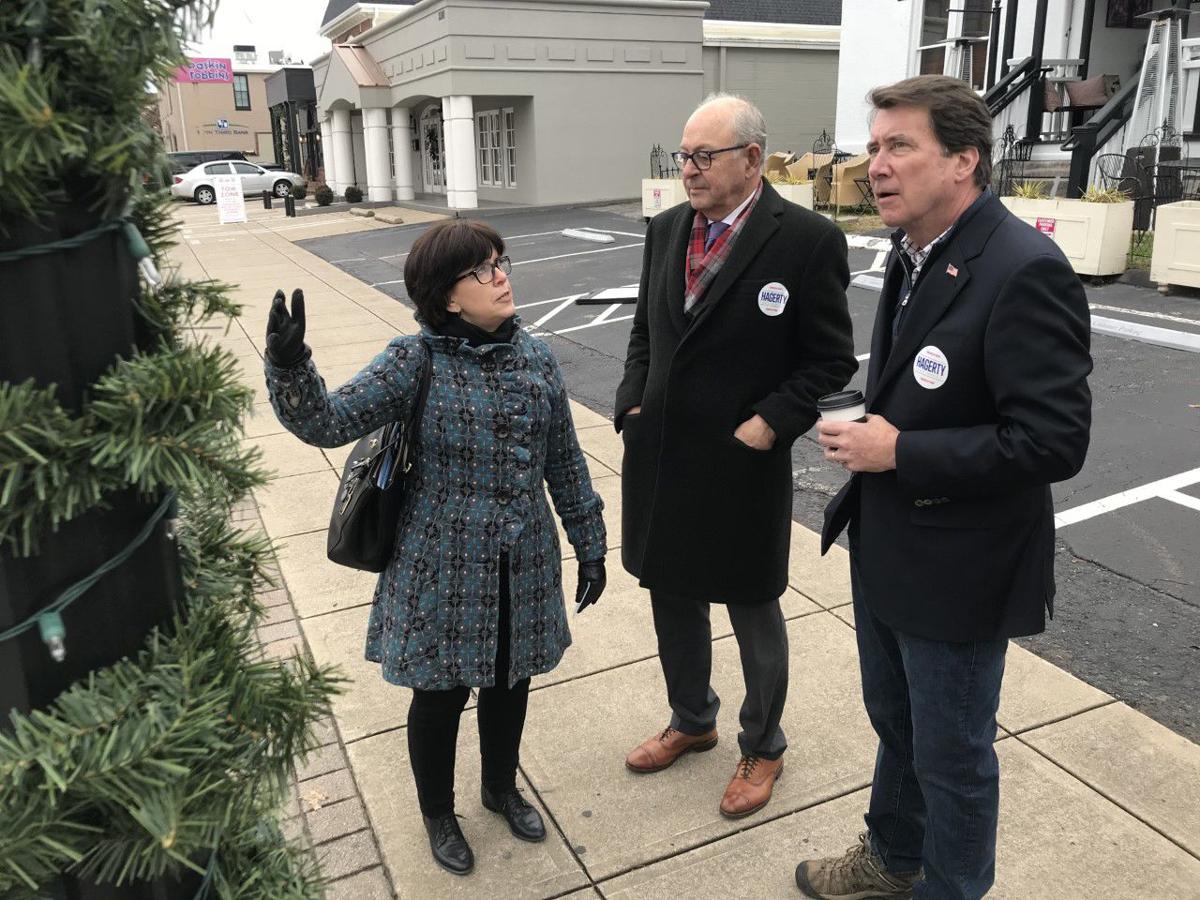 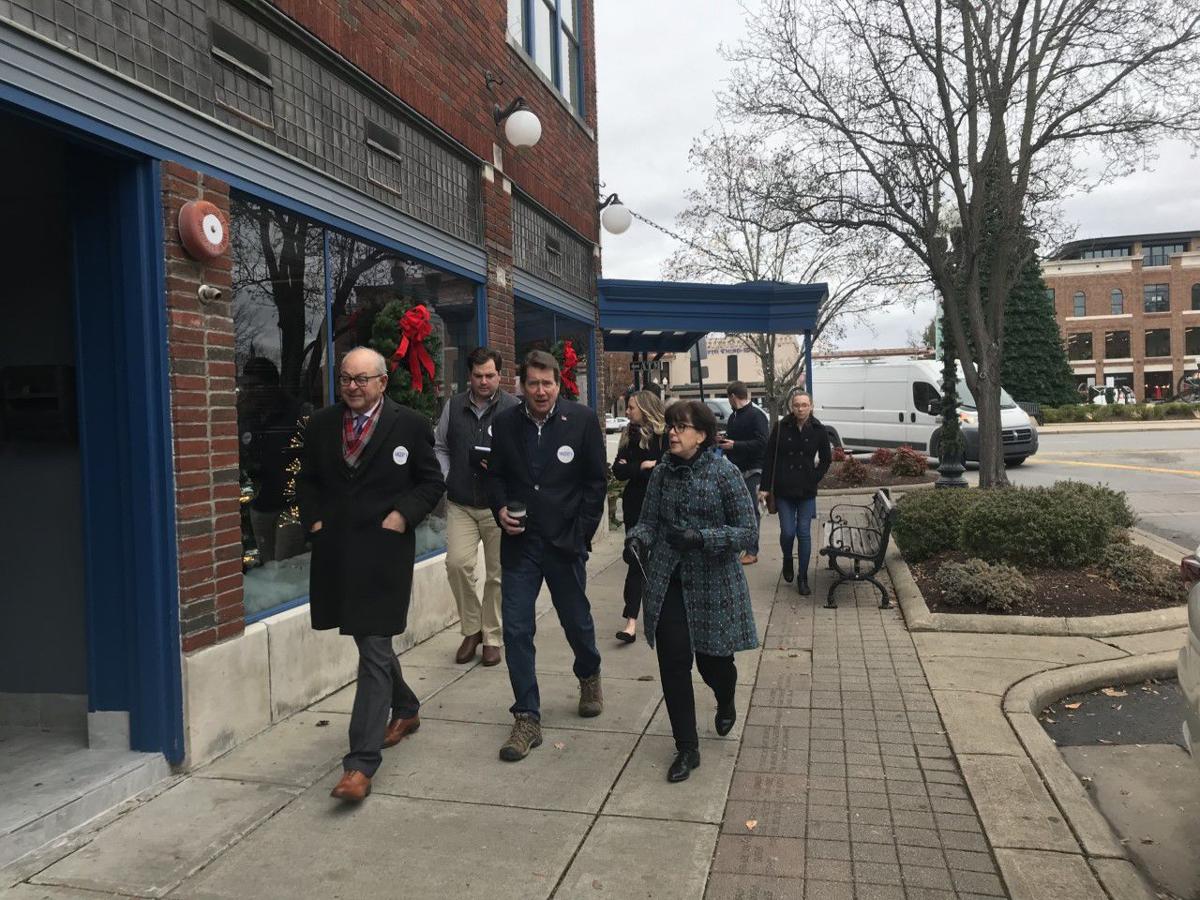 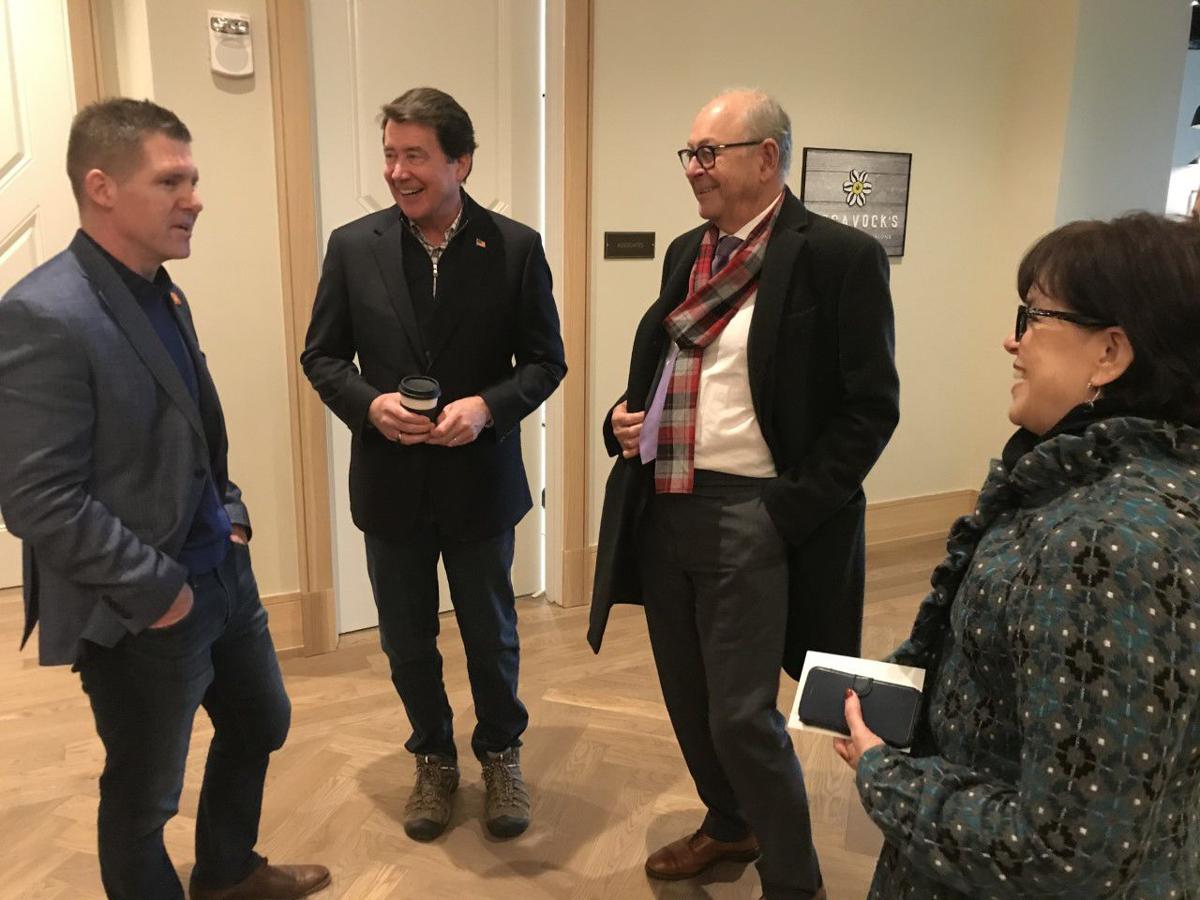 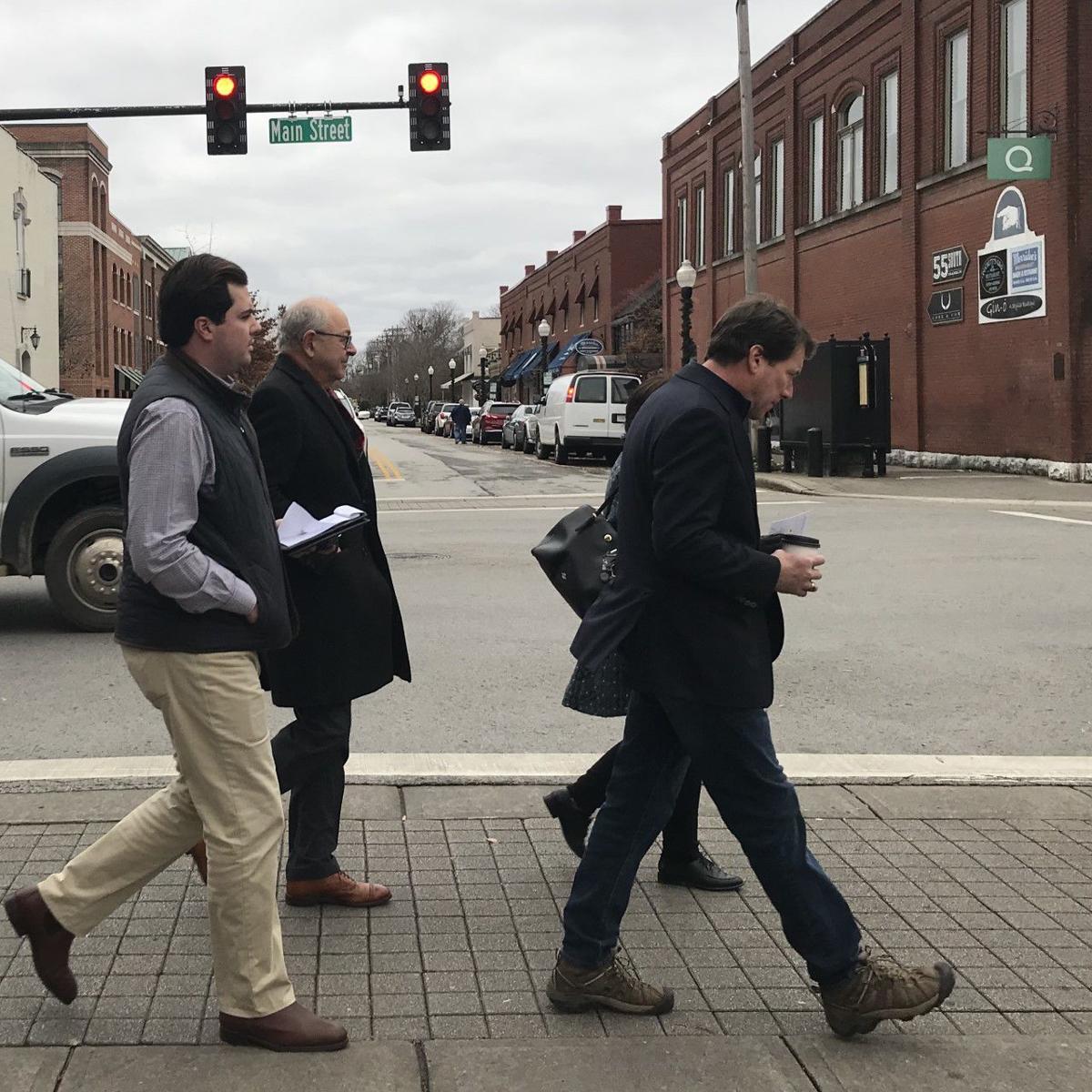 Formally acting as the U.S. Ambassador to Japan, Hagerty resigned from his position earlier this year in order to run for Senate, with President Donald Trump officially endorsing him in back in July. Hagerty also served in Governor Bill Haslam’s administration as commissioner of the Tennessee Department of Economic and Community Development from 2011 - 2014, overseeing significant investments into the state from the likes of Bridgestone and Nissan.

Hagerty’s first stop in Franklin was at the Harpeth Hotel on 2nd Avenue, where hotel staff showed the Senate hopeful around the hotel’s lobby, restaurant and more. Hagerty and Moore also made stops to Landmark Booksellers, Tin Cottage and the historic Franklin Theatre. The final stop on Hagerty’s tour was Puckett’s Grocery & Restaurant on 4th Avenue, where the Senate candidate sat down with reporters, answering questions about his campaign goals and aspirations.

Questions from reporters are paraphrased. Bill Hagerty begins this portion of the question and answer session with reporters below.

A: I spent a lot of time working with the leadership here in Franklin, and with a lot of the companies to expand the economy when I served as the head of economic and community development for the state. It's great to be here and see the economy still growing strong in Franklin, it's one of the most attractive places in what I think is the most beautiful state in the nation.

It's been great to hear the concerns of people on Main Street, to hear what they think the opportunities might be for our state, and what I'm hearing importantly, is getting the government out of the way as one of the things that would make a big difference.

What I see is small businesses here that are truly the engine of our economy thriving. The way to make that happen, the way to accelerate that even further, I think, is to get the federal government out of the business of regulating small business.

Q: Why are you running for Senate?

A: The reason I'm running is that I'm really concerned about what I've seen coming out of Washington for years, and I'm concerned that the things most important to Tennesseans are really coming under assault from the liberal socialists in Washington. When I hear them advancing theories like Medicare for All, and expanding Obamacare to a point that we'll have no private health insurance, then the government will take over our healthcare system... that's going to lead to the loss of the health care system that we know we like.

When I hear them talking about the Green New Deal as they call it, that would basically inject the government into every aspect of our life... we don't need that - we need less government, not more. Then it's this never-ending call for impeachment, and this has been going on since - I think - the president crossed 270 electoral votes.

I was there right after the election, I'd volunteered for six months full-time in 2016, and I was there when picket lines were set up and they're shouting 'not my president.' That's been going on from the very beginning, and I think the opposition just keeps moving the goalposts, but the goal is clear: they want to undo the results of the 2016 election.

What saddens me even more is when our own Republicans - people like Mitt Romney - side with the Democrats against the president. I think we need to stand unified behind the president.

Q: What are your thoughts on the ongoing impeachment inquiry against President Trump?

A: The president called me the other day to ask me how things were going, and we talked about how Tennesseans were viewing impeachment. I explained that I think the intensity behind his support is only growing stronger, I think people in Tennessee are tired of this, they would rather see Congress working on things that would make a difference for Americans and for Tennesseans.

It's been a year now that the USMCA (United States–Mexico–Canada Agreement) has been sitting, waiting for Nancy Pelosi to move [it] through the Congress - no action. I think that's what people are tired of, certainly it's what I'm tired of: seeing people in Washington, people in the legislative branch putting their own needs, and Washington concerns, ahead of the concerns of people like us here in Tennessee.

If Tennessee sends me to the U.S. Senate, I'm going to put Tennessee's concerns first and fight to make things better for the people of our state, not for the people inside the Beltway in Washington.

Q: If elected, how would your experience under Governor Haslam’s administration help prepare you for governing on a federal level?

A: When we came into office in January, 2011, we were confronted with a real challenge: there was a $1.6 billion budget shortfall due to the fact that the stimulus money that had been injected in the state government was burning off. So the governor asked us to do a top-to-bottom review of every department.

I went first because of my business background, and what we did was we significantly restructured the department I was in charge of running. We greatly reduced the budget, we eliminated a number of positions, but we decentralized the management of the department and I put leaders closer to the place where jobs needed to be created.

It's that sort of outside thinking, that sort of business perspective I think we need in Washington today. What we did during that process of restructuring the department and reducing the headcount was ask one very simple question: is this something the government should be doing? If we couldn't answer that question clearly in the affirmative, we stopped doing it.

I think that perspective needs to be brought to Washington too. We've got $22 trillion worth of debt right now and rising, and I promise to bring that perspective to everything that I look at that comes across my desk; is this something that the government actually should be doing, is this something the private sector is better suited [for]? If the answer to any of those is that the states are better to do it, or the private sector or local government, that's where the responsibility should lie, and I think the federal government has grown too big. I'll be looking for opportunities every day to trim back the excess of the federal government.

Q: What separates you from the other Republican candidates also running for Senate?

A: The president had a clear look at who should be the next U.S. Senator from Tennessee and clearly, he chose me. In fact, he and I spoke the other day and he reminded me that I am the only member of his administration that will be on the ticket with him in 2020. I'm the only person from the executive branch that he has endorsed to be on the ballot with him next year. I think that's very important because he wants somebody that has been on the execution end of the policies that we are trying to implement overseas.

Also, like the president, I'm a business person with an outsider's perspective - that will bring a lot of value to the U.S. Senate.

In my mind, abortion is not a human right - it takes a human life. The president knows that I'm going to stand strong for our military and for our veterans, and I'll stand up against radical Islamic terrorism, I'll stand against China when needed, and I will stand with Israel, just like the president did when he moved the U.S. Embassy to Jerusalem.

Q: How has your experience as the U.S. Ambassador to Japan helped prepare you for the Senate?

A: A very large component of my job had to do with national security and defense. We have more men and women of the U.S. military stationed in Japan than any country outside of the United States, so I spent a great deal of time working with them on issues of strategic significance. If you think about the location of Japan, it's in a very rough neighborhood; North Korea, Russia and China are all right there.

I also was very involved in economic matters. One is continuing to encourage more capital coming from Japan to the United States. Thanks to our policies adopted over the past three years, we've lowered our corporate tax rate from the highest in the world to something that's much more competitive.

We've cut back on burdens and regulations, and what we've found is that business confidence and consumer confidence have gone through the roof at all-time record levels. We have the strongest and best growing economy of any of the major economies in the world, and the United States is by far the best place - I think - for companies to be investing.

You see the results right here: look at Mitsubishi Motors moving their headquarters to Tennessee. We're going to continue to see that type of economic growth, and as the next U.S. Senator, I'm going to be focused on continuing to work with our president and grow the economy here.