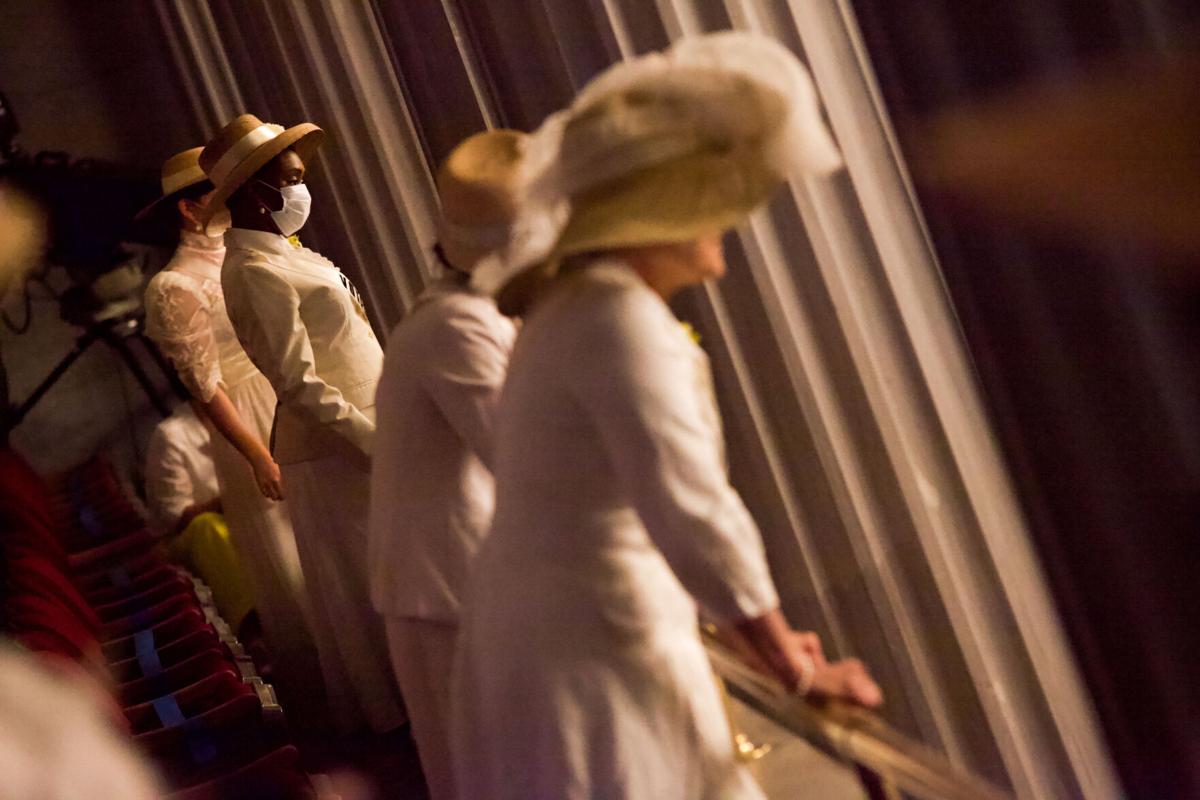 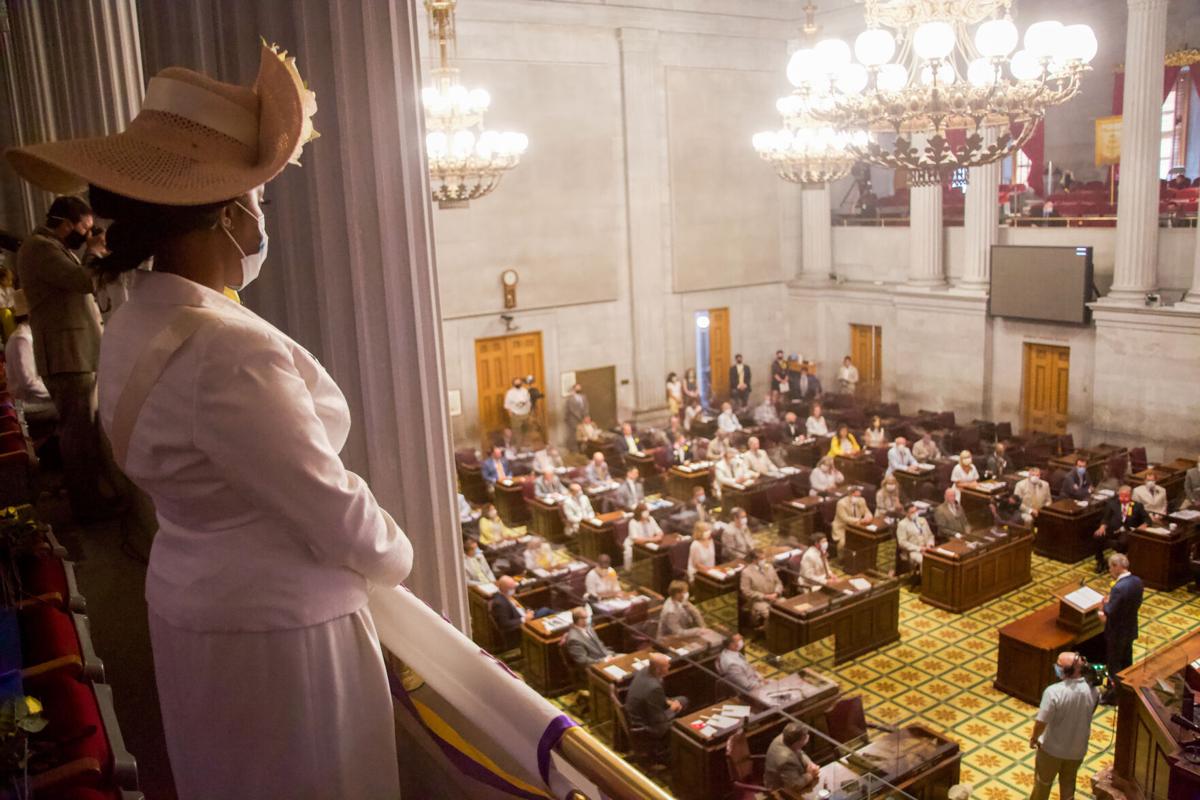 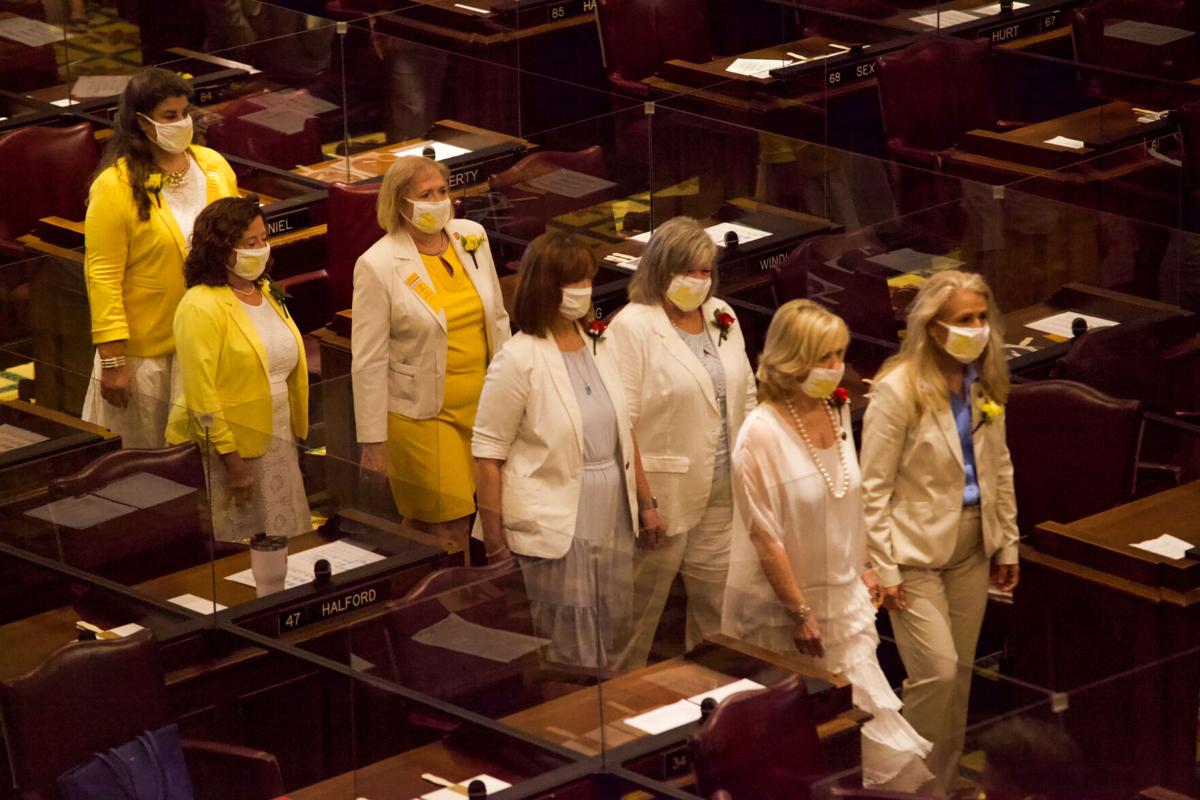 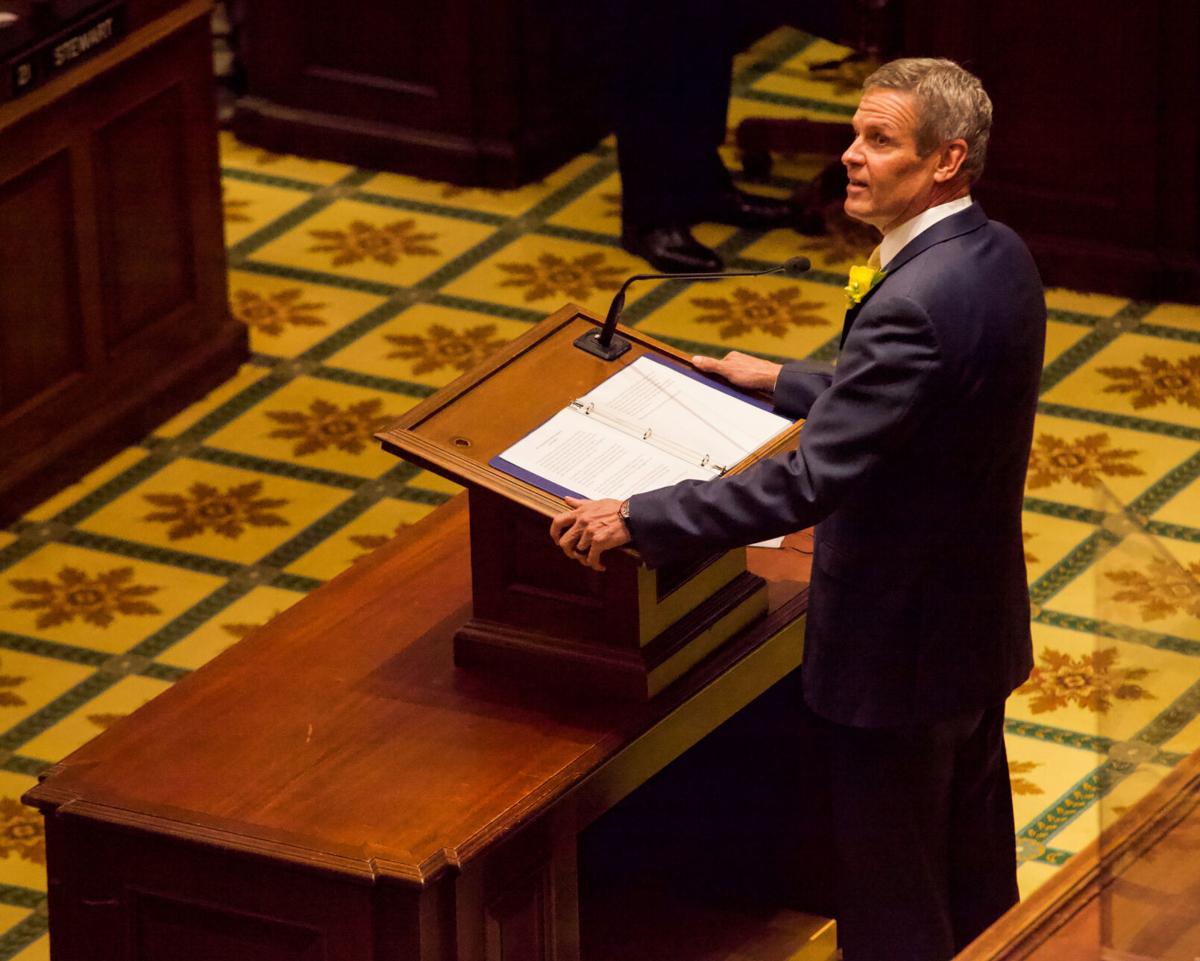 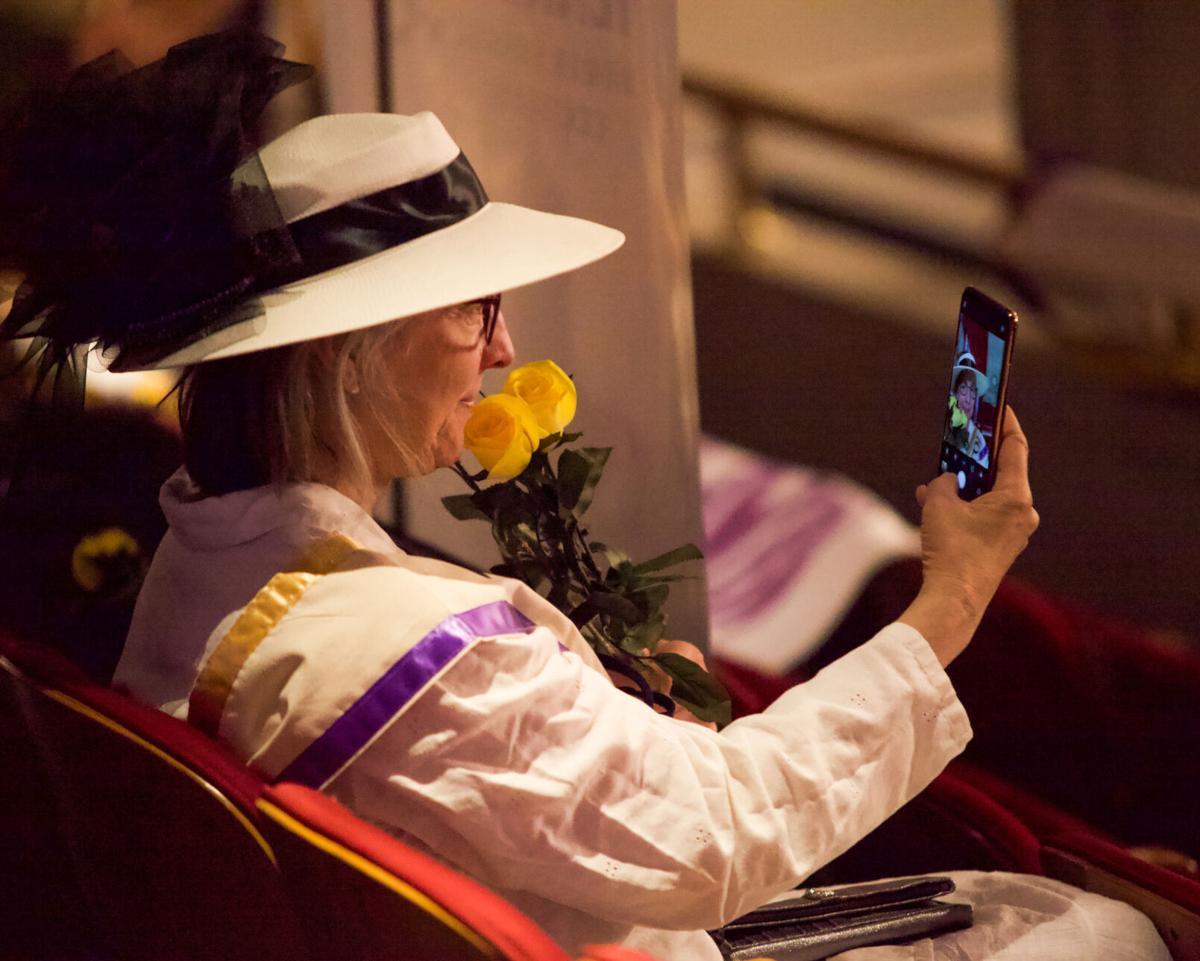 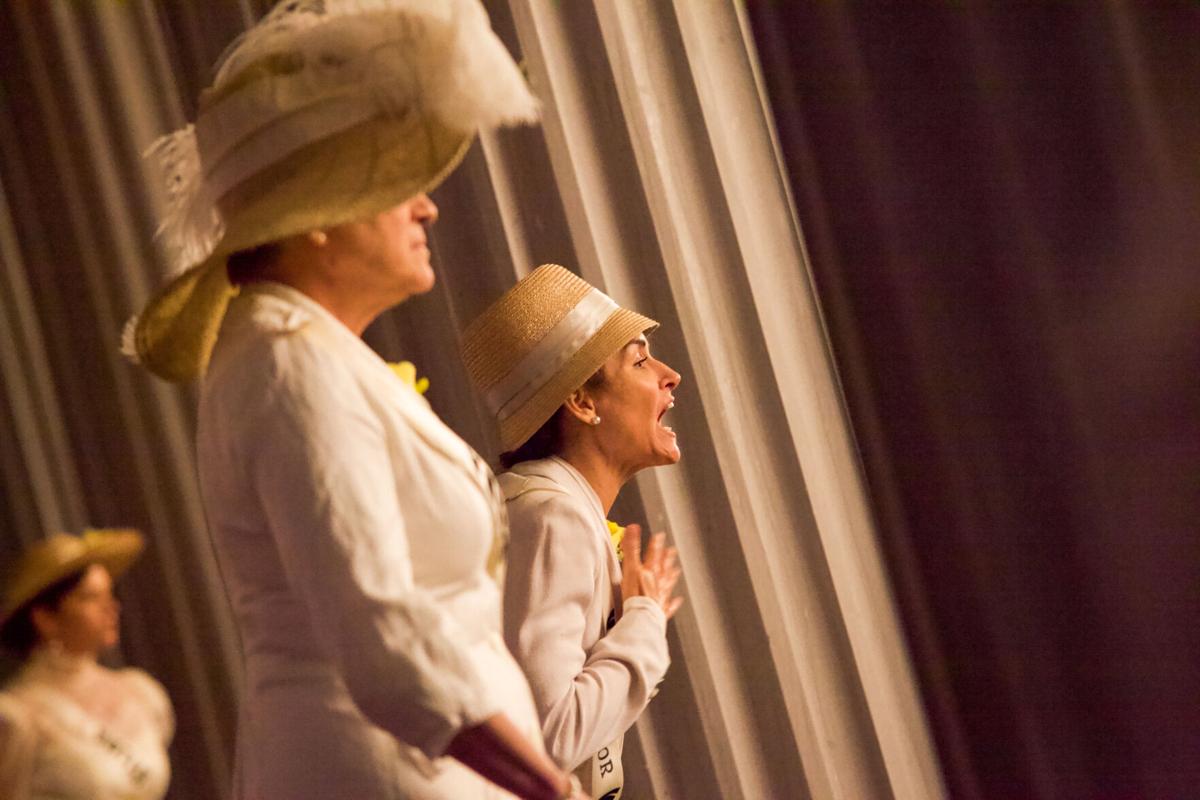 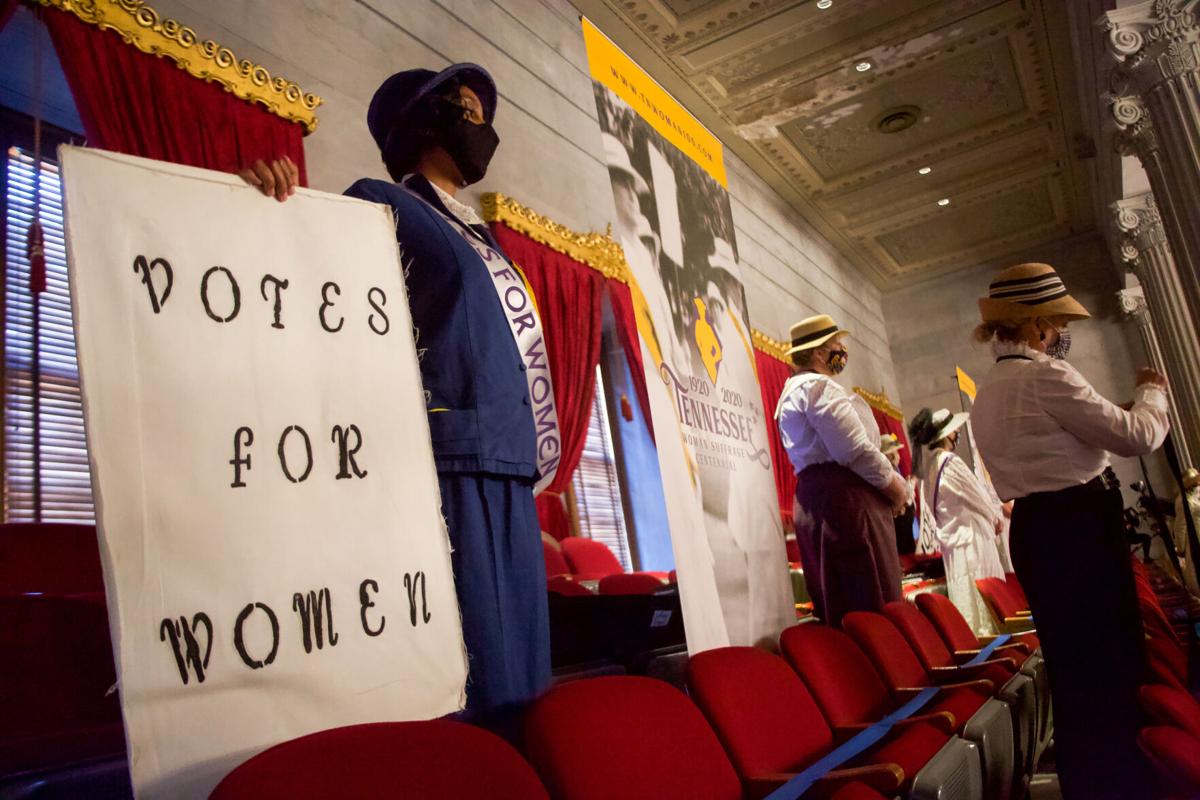 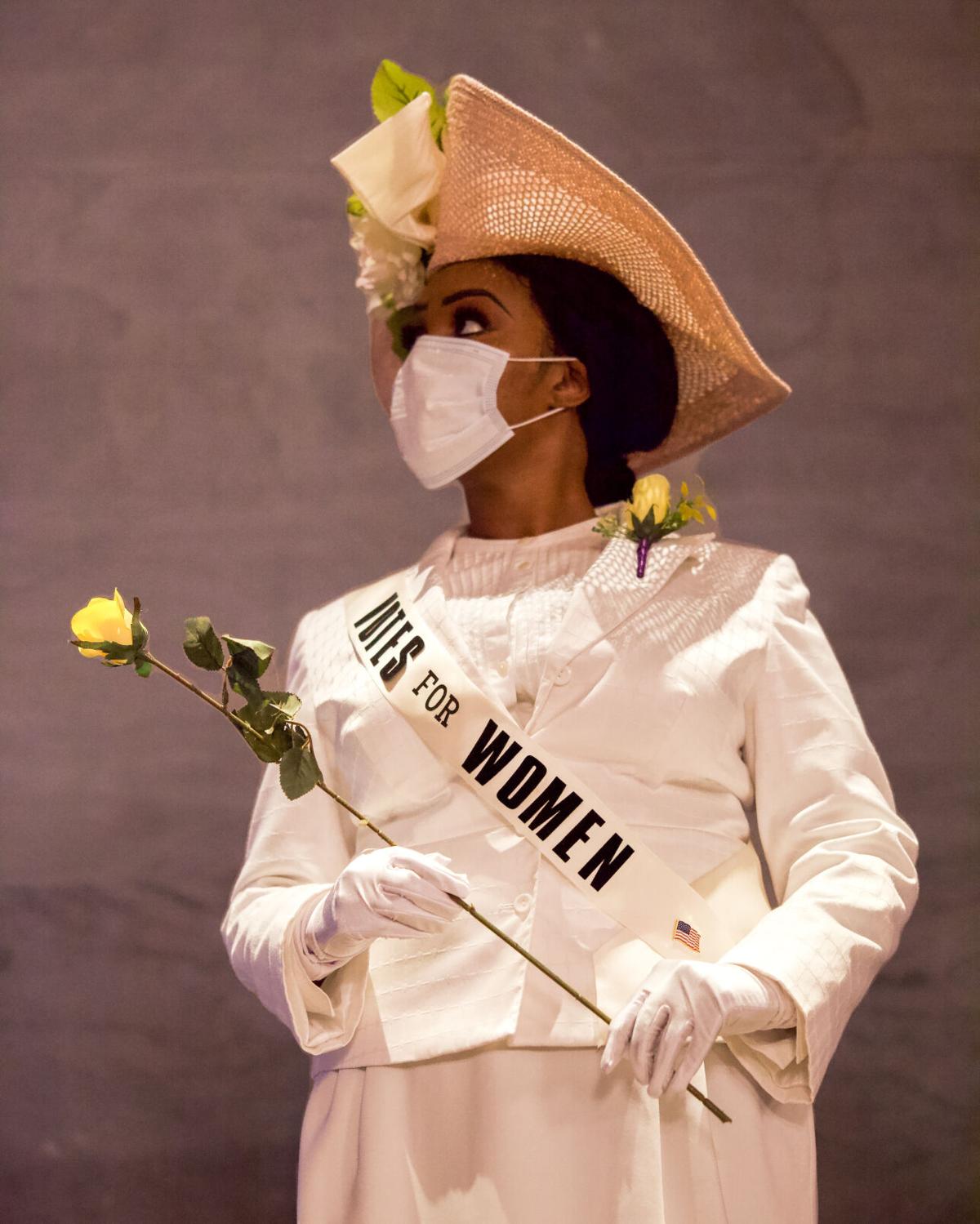 Nashville actor Erica Patterson, who portrayed a suffragist during the centennial of the ratification of the 19th Amendment and the Tennessee State Capitol on August 18, 2020. 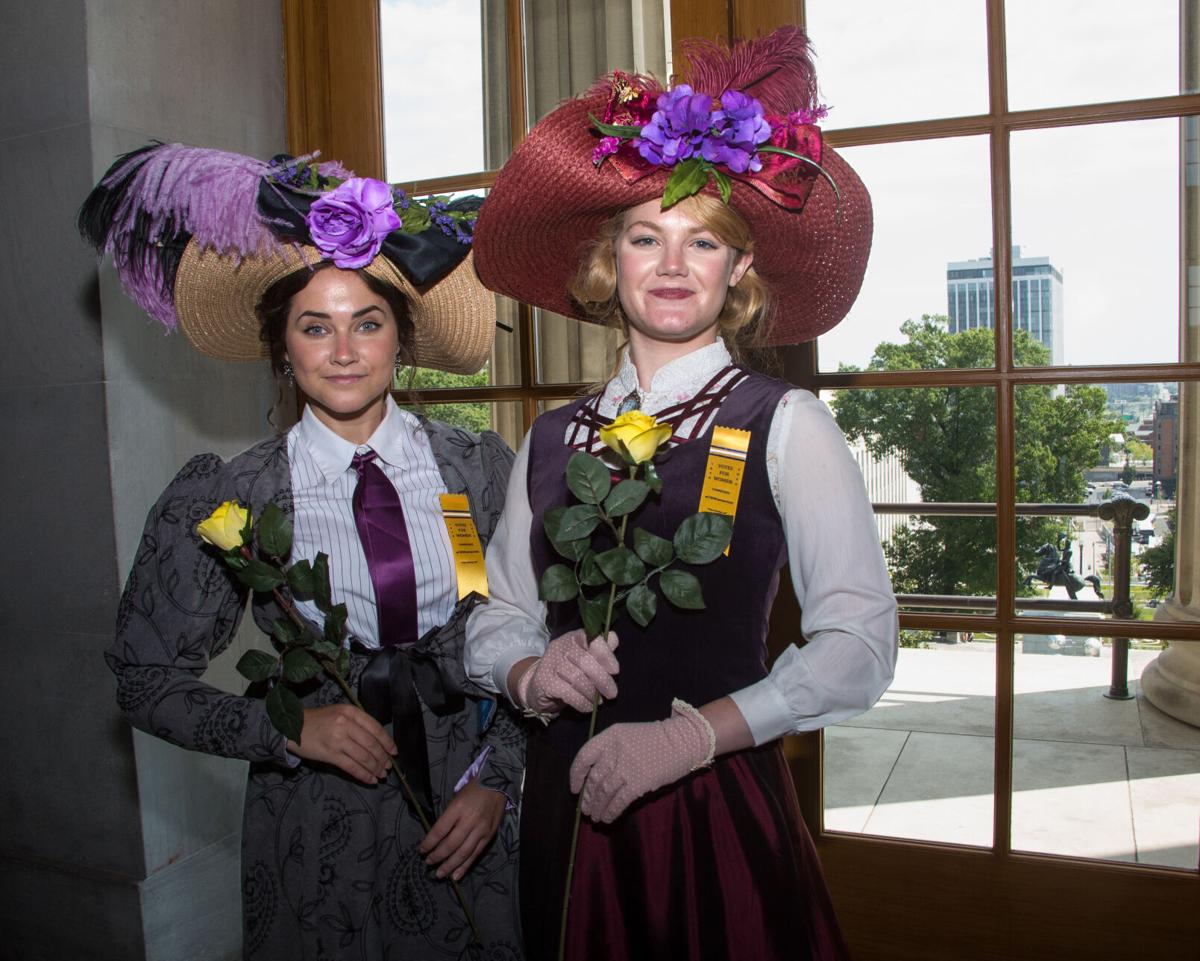 Hatty Ryan King of Franklin and Morgan Davis of Brentwood portray ani-suffrage advocates during the centennial of the ratification of the 19th Amendment and the Tennessee State Capitol on August 18, 2020.

Tuesday marked the centennial of the ratification of the 19th Amendment and the Tennessee State Capitol celebrated the anniversary with a reenactment of the historic vote.

The “Our Century! Living Tennessee’s History of the Ratification,” reenactment took place at 9:30 a.m. in the House Chamber of the State Capitol where the actual vote took place 100 years ago.

The event featured current lawmakers and actors portraying the lawmakers of 1920 while women filled the chamber's balcony in historical dress portraying pro and anti-suffrage supporters.

Two of those women were Hatty Ryan King of Franklin and Morgan Davis of Brentwood, both of whom portrayed anti-suffragettes, and said that the opportunity to take part in the event highlighted the importance and vast impact of the right for women to vote.

"The ability to vote today and appreciate what those women went through, you just can never get too much context," Davis said. "We definitely own it to these women to appreciate what they did for our right to be able to vote."

"If was observing our world and what it's doing right now and I wasn't able to have a say in it, I think it would infuriated me and make me feel really, really helpless, so the fact that I am empowered to vote and I am empowered to use my voice and my personship to stake a claim for who I am and what I want is really special and powerful," King said.

Another woman in the balconies was Nashville actor Erica Patterson, who portrayed a suffragist. She said that this was a unique experience that spoke to the relevancy of voting and equal rights in 1920 and 2020 alike.

"It was just amazing to reenact this and be a part of something that was so different and 100 years ago to know that we were fighting for something that is still so pivotal," Patterson said.

The hour-long program was live-streamed and featured remarks by Tennessee Gov. Bill Lee, a prerecorded statement by Tennessee First Lady Maria Lee, a performance of "America the Beautiful" by singer Melinda Doolittle and a walk through the history and actual vote by Mac Pirkle, founder and CEO of Creative Communications who produced the reenactment, and broadcast journalist and filmmaker Demetria Kalodimos.

Kalodimos and Pirkle detailed the historic special session with the aid of some living history actors, as well as the actions of protesters to bring attention to their cause from holding the first picket of the White House in Washington D.C. to demonstrators engaging in hunger strikes.

"Through it all loyalties were visible and evident by the display of a yellow rose for suffrage and a red rose against," Kalodimos said, pointing to her own yellow rose pinned to her blazer, as she spoke to the chamber's members, some donning yellow, others red flowers on their chests or in their hands.

Pirkle spoke of the social and political climate of 1920 that birthed the revolutionary movement and changed the course of American history.

"1920 found our country bitterly divided," Pirkle said. "Raved by the Spanish Flu pandemic, the aftermath of World War I, continued Jim Crow racism and a national presidential election in November.

"It was not lost on the Republican and Democratic parties that, if women received the vote, that meant 27 million potential additional votes added to the rolls virtually overnight and both parties wanted bragging rights as the part that delivered the 19th Amendment for American Women."

As the reenactment played out, anti-suffragists voiced their cases and votes against the amendment, which were met by chants of "votes for women!" and hisses of disapproval from suffragists in the balconies.

The embattled 1920 ratification of the 19th Amendment was secured by way of a tie-breaking vote by who was then the youngest member of the House, 24-year-old Harry Burn. Although he was wearing a red rose, Burn voted in favor of suffrage.

The balconies transformed into bursts of cheers at the announcement of the passage of the motion with suffragists holding protests signs and raining down long-stemmed yellow roses onto the legislature below.

And while the halls and chambers of government bodies are served today by representatives elected from the votes of men and women alike, some of those seats are also filled by women representing.

"As Williamson County Commissioners, we stand on the shoulders of many women who suffered greatly for the privilege to vote, and we lead with equality today, as elected public servants," the statement reads. "We honor those who came before us, by teaching the next generation that voting in each election is a sacred responsibility, a civic duty, and a nod to those who sacrificed so much on all of our behalf."

More information about the ratification of the 19th Amendment can be found here and, Tuesday's entire program can be watched below: