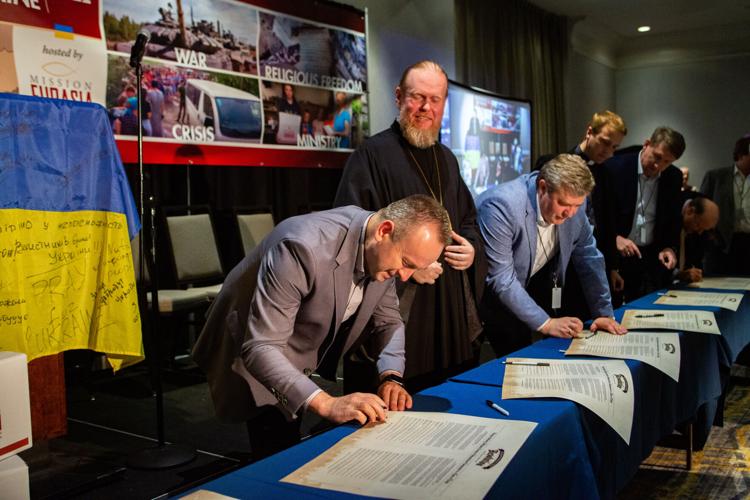 Ukrainian elected officials and religious leaders sign a resolution of solidarity on Nov. 11, 2022, at the Nashville Consultation on Ukraine in Franklin, Tenn. 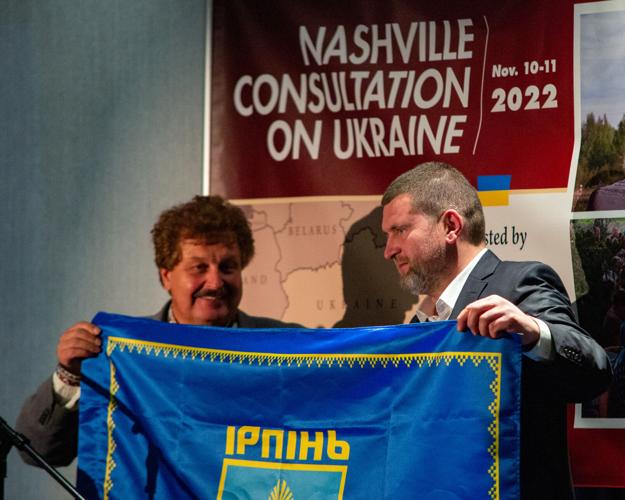 Mission Eurasia President and Spring Hill resident Sergey Rakhuba (left) is presented with the flag of Irpin, Ukraine, by Irpin Mayor Oleksandr Markushyn (right) on Nov. 10, 2022, at the Nashville Consultation on Ukraine in Franklin, Tenn. 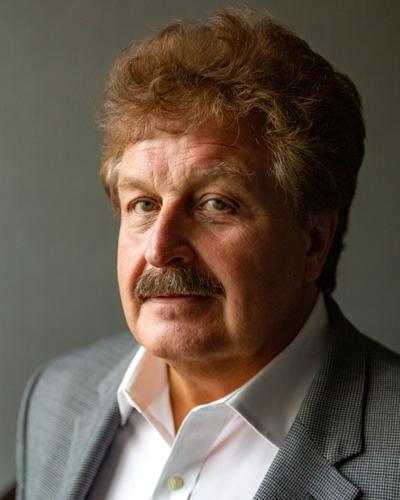 Mission Eurasia President and Spring Hill resident Sergey Rakhuba poses for a portrait on Nov. 11, 2022, at the Nashville Consultation on Ukraine in Franklin, Tenn.

Dozens of Ukrainian nationals gathered in Franklin on Nov. 10 and 11 for the Nashville Consultation on Ukraine, a conference featuring Ukrainian faith leaders and politicians. About 15 of the leaders flew to the U.S. from the war-torn country to discuss the role they hope American Christians can continue to play in the ongoing humanitarian efforts and future rebuilding of Ukraine. The conference was hosted by Mission Eurasia, a formerly Illinois-based organization that has relocated to Franklin.

Mission Eurasia “trains, equips, and mobilizes national Christian leaders throughout Eurasia and Israel who are engaging in evangelism, church-planting, holistic ministries, and church growth to transform their countries for Christ.” A consultation also met in 2015 in London. This year’s event in Tennessee drew around 50 people to the Franklin Marriott Cool Springs. Topics included Ukrainian independence, the preservation of democracy, religious freedom, the role of the church in wartime, and the rebuilding of Ukraine as a “Christian nation.”

According to a 2019 U.S. State Department report, a national survey by the Razumkov Center — a Ukrainian non-governmental public policy think tank — reported that more than 60 percent of Ukrainian respondents identified as Christian Orthodox, with nearly 10 percent Greek Catholics being the next closest demographic.

Pastor Jay Strother from The Church at Station Hill, Brentwood Baptist Church affiliate issued the opening prayer for the conference.

Irpin Mayor Oleksandr Markushyn presented Rakhuba with the flag of Irpin as well as three commemorative coins — one signifying the fight of the city against the Russians, the second recognizing the city’s parks and development, and the last coin bearing Irpin’s coat of arms. A video of before-and-after images of the city showed the scale of the destruction, with some 70 percent of the buildings destroyed in what was just one year ago the home of an estimated 62,000 people.

Markushyn spoke of his and his city’s experience fighting the Russian Army during early days of the war. He described that time as “the hardest month in the history of Irpin,” and a “battle of good and evil,” a battle in which he personally fought as part of the Ukrainian Territorial Defence Forces. Ukrainian President Volodymyr Zelenskyy bestowed Irpin the title of “Hero City,” but the battle also resulted in widespread destruction of the city, including Mission Eurasia’s office, and the deaths of some 300 civilians and more than 80 Ukrainian servicemembers.

“We paid a great price for this,” Markushyn said, adding that roughly 6,000 families had been left homeless, including some 8,000 children.

In September, the United Nations confirmed 5,767 Ukrainian civilian deaths and 8,292 injuries across the nation due to the war. Those numbers have undoubtedly increased over the past two months, although exact casualty numbers may never be known.

Markushyn said churches have served as “humanitarian hubs” throughout the war. He thanked U.S. Christians and asked for continued support as the country looks forward to reconstruction as Russian forces retreat from some occupied areas.

“If every church in the United States decides to help rebuild one small building, there will be no more destroyed buildings left in Irpin in one year,” Markushyn said. “This can be the beginning of a great good deed.

“We are convinced that only together we can rebuild our city of Irpin and Ukraine,” Markushyn continued. “We don’t just fight for land and for our independence today, we fight for all the democratic values of the world.

“Ukraine made its choice to be in the democratic community, and I am convinced that together we will win because our power is in unity. The truth is with us, God is with us — Glory to Ukraine,” Markushyn declared, the crowd responding with a standing ovation.

Unguryan called Ukraine “the Bible belt of Europe,” and asked for support from conservative Christians who he called “the real America.”

Conference representatives confirmed that local and state officials including Gov. Bill Lee had been invited, but the conference was void of any prominent local, state or federal elected officials from Middle Tennessee.

And while many values and traditions may be shared between members and groups of both nations, the results of the 2022 midterm elections could impact future aid from the U.S. government to Ukraine, even as the U.S. announces $400 million in additional military aid, means that aid and support may be more reliant on the generosity of American Christians.

The two-day conference concluded with the signing of a resolution of support by speakers and attendees who pledged solidarity in the face of the mounting international crisis as the country looks to future stabilization.

“This war presents an urgent opportunity for the global church to demonstrate solidarity with those who are suffering, to advocate for religious freedom, and to help restore peace and justice,” the resolution read in part. “Churches can serve their historic role in developing a vision of hope and justice for the people of Ukraine, and with the nations of the world providing essential aid. The global Christian community can assist practically by supporting well--coordinated programs that create havens for social, spiritual, emotional, psychological and humanitarian assistance.”

“The citizens of [Nashville and] Williamson County, I really want them to understand that every single dollar that they donate to humanitarian organizations, like Mission Eurasia, that goes to helping Ukrainians there and makes a huge, huge difference,” Rakhuba said. “So with gratefulness. on behalf of all Ukrainian people, I want to thank them, and I want to plead [to] you, please don't allow your generosity to slow down.”