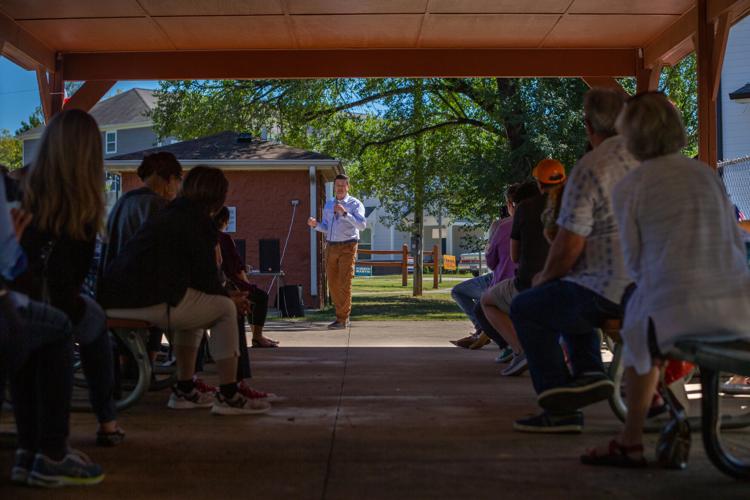 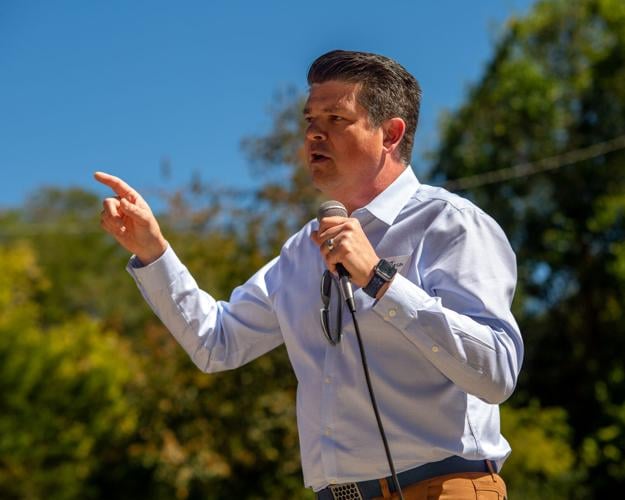 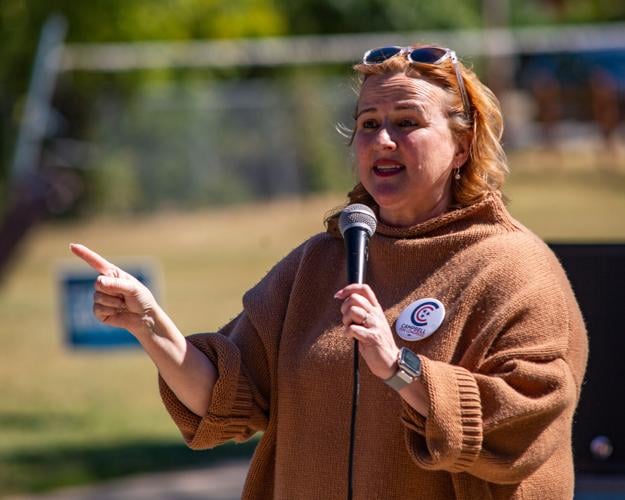 U.S. House of Representatives Candidate for District 5 Heidi Campbell, who is also currently the State Sen. from District 20. 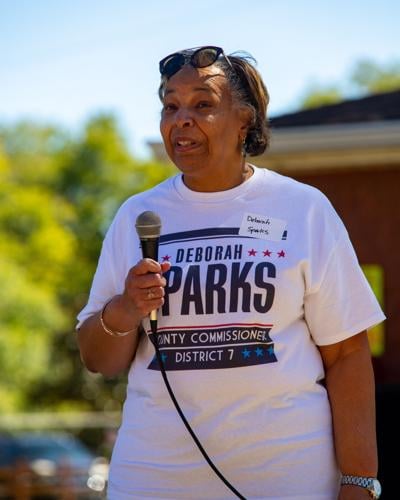 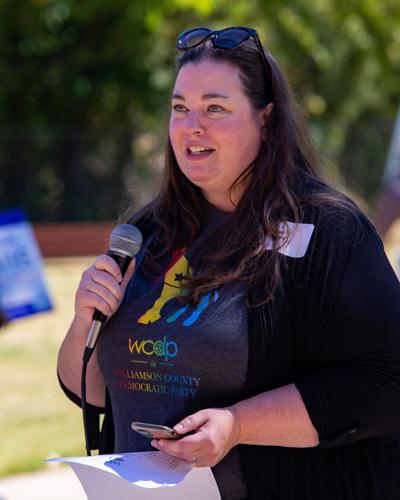 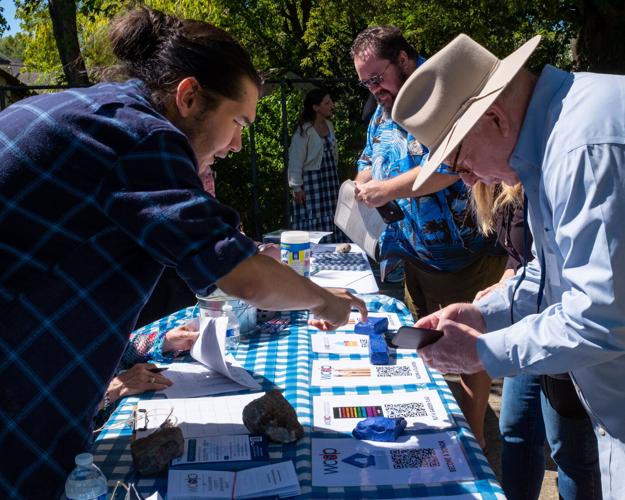 The Williamson County Democratic Party held their Hugh Williamson Unity Picnic on Saturday, drawing around 100 voters and supporters at Franklin's Strahl Street Park to hear remarks from Democratic candidates just one month before the 2022 general election.

The picnic was the return of the party's in-person fundraisers since the start of the ongoing COVID-19 pandemic.

"This was a really great turnout. We sold out all of our tickets, so that was great," WCDP Chair Jenn Floey said. "And as you can see, we have people who really care about the candidates who want to work for all of us here in Tennessee, and that's really great to see."

Foley acknowledged the difference in size and power between the WCDP and the Williamson County Republican Party, and added that despite the uphill battle both locally and at the state level, that the WCDP is committed to giving voters a choice.

"No matter what people think of who Democrats are, and what we stand for, democracy depends on having a choice in the ballot," Foley said. "Otherwise, it's, you know, theocracy, or one, only one party in charge, and so I think the momentum that we're building here as the Democratic Party is crucial, and it's inspiring, and I think on a national level we see Democrats working up and down the ballot, trying to make a change and and make sure that people have choices."

U.S. House of Representatives Candidate for District 5 Heidi Campbell, who is also currently the State Sen. from District 20, spoke of her path from a musician with dreams of a becoming a rock star to entering into the world of government and politics.

Campbell is facing off against Maury County Mayor Andy Ogles whose outspoken right-wing views have fueled Democrats to get out and vote.

“We are fighting with everything we have for it,” Campbell told the crowd. “We have now over 500 volunteers, we have over 4000 donors. We have Republicans and independents coming over to our campaign. I think people realize how crazy my opponent is, and I think that's playing a big part in it."

Democratic gubernatorial candidate Jason Martin drew the largest response from the crowd with his pitch of governing with “compassion and common sense” a little more than a month before the November general election.

The self-described “girl dad” is a critical-care doctor by trade who told the crowd about his experiences working in an 18-bed intensive care unit in a Sumner County hospital during the height of the ongoing COVID-19 pandemic.

The 47-year-old Martin said caring for and witnessing more than 400 people die from the virus was “life-changing,” calling the experience key to his decision to throw his hat in the ring.

“It's what caused me to turn my life upside-down, and [I] wanted to run this race because of the moments of pain that we felt in the ICU,” Martin said.

The state’s COVID-19 response was one example of what Martin said was a failure of leadership from Gov. Bill Lee, his heavily favored Republican opponent in the Nov. 8 election.

“We got no leadership from Gov. Lee in those moments,” Martin said. “We got threats to defund the health department, we got silence from the governor when people in the General Assembly were pushing horse pills on people, we got executive orders to weaken school districts’ ability to protect their children and their teachers, and y'all, we're not going to stand for it anymore in Tennessee.”

In July, Martin took part in a gubernatorial and congressional candidate forum at University of Tennessee Southern, hosted by The Tennessean, at which he said he would govern based on data.

“I would surround myself with content experts, and I would come up with public policy decisions that reflect the moment, without any worry about political ramifications,” Martin said during the forum.

“It's already delaying care,” Martin said. “It's already hurting women and birthing people in the state of Tennessee, and it must be overturned. The candidate pledged to “use every ounce of executive authority” to protect doctors.

“I know what it's like to sit in that exam room and have someone make a decision to die,” Martin said of expanding Medicaid. “Working people, people working two and three jobs, making the decision to die rather than get treatment for their disease because they didn't want to saddle their family with medical debt. That should not happen in 2022. It's part of my motivation to be the governor of the state of Tennessee. I know we can do better to take care of one another.”

WSMV political analyst Kent Syler noted in August that because Lee has the advantage, Martin’s challenge is to “reestablish the Democratic brand” in rural counties in order to contend with the incumbent.

Martin also advocated for investing in expanded broadband access and legalizing cannabis, calling medical cannabis a “no-brainer,” pitching the legalization of the plant as an economic driver for the state and for farmers, among other issues.

Martin has attacked the Lee administration on nearly all fronts, including on the ongoing fallout from the Hillsdale charter school controversy. Martin said that issue, as well as the recent increased funding to the Tennessee Bureau of Investigation following the murder of Memphis teacher Eliza Fletcher, show Lee on the defense just over one month before the election. But Lee has maintained a significant financial advantage over Martin throughout the race.

“Gov. Lee is on the run right now, and this race is absolutely winnable,” Martin said.

Martin has also called Lee out for refusing to debate.

The state of Tennessee provides a variety of voter resources: See how to register to vote, find voting locations, and find more information.

Early voting for the Nov. 8 general election will be held from Oct. 19 until Nov. 3, with the deadline to register to vote set for Oct. 11.