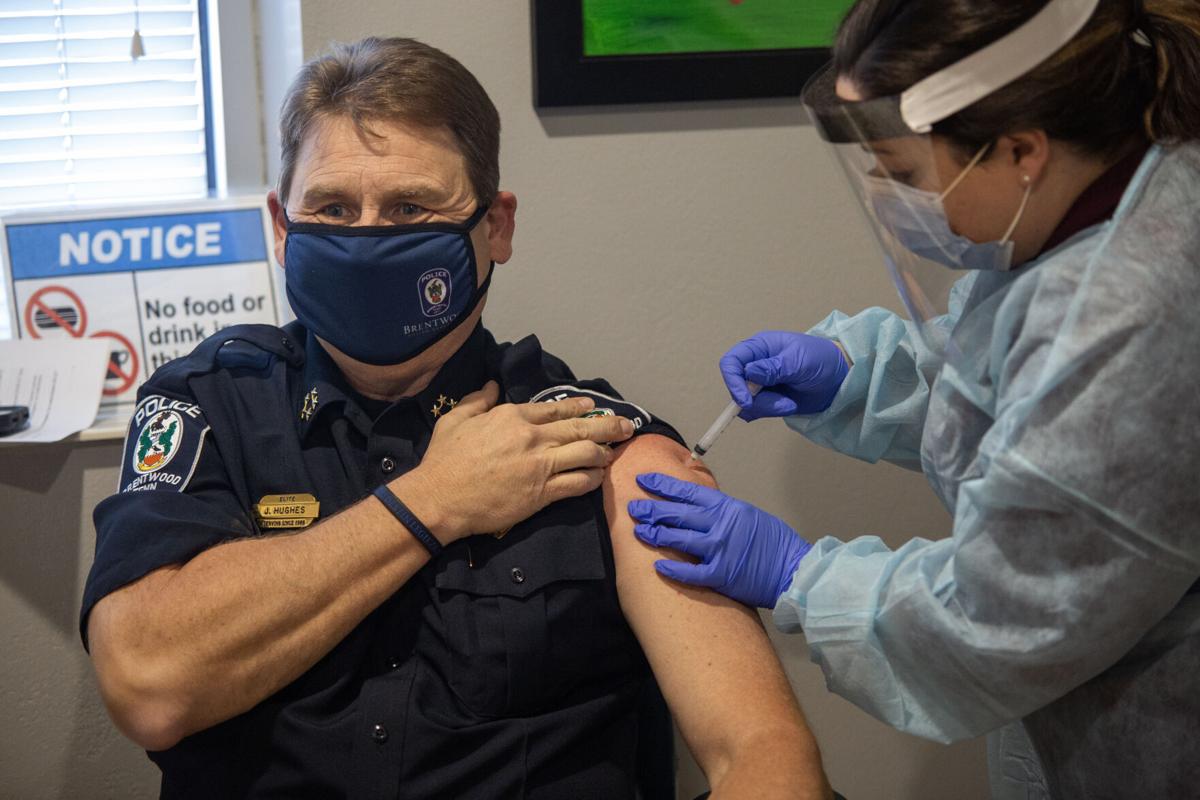 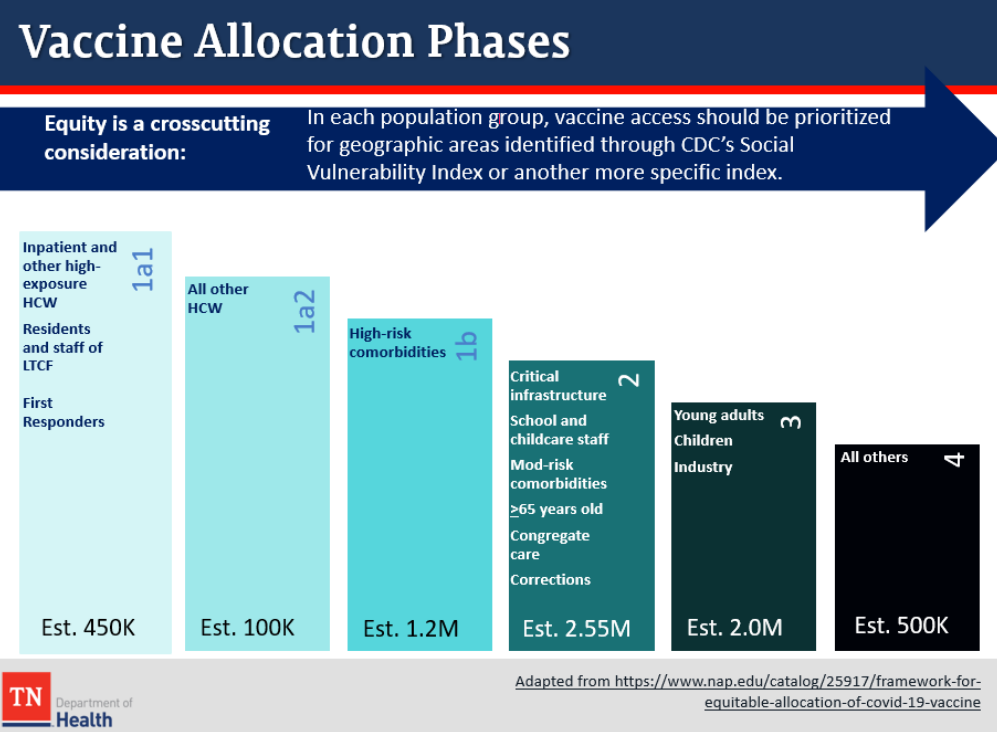 The COVID-19 vaccine allocation phase plan will see the vaccine distributed in phases based on certain risk factors. 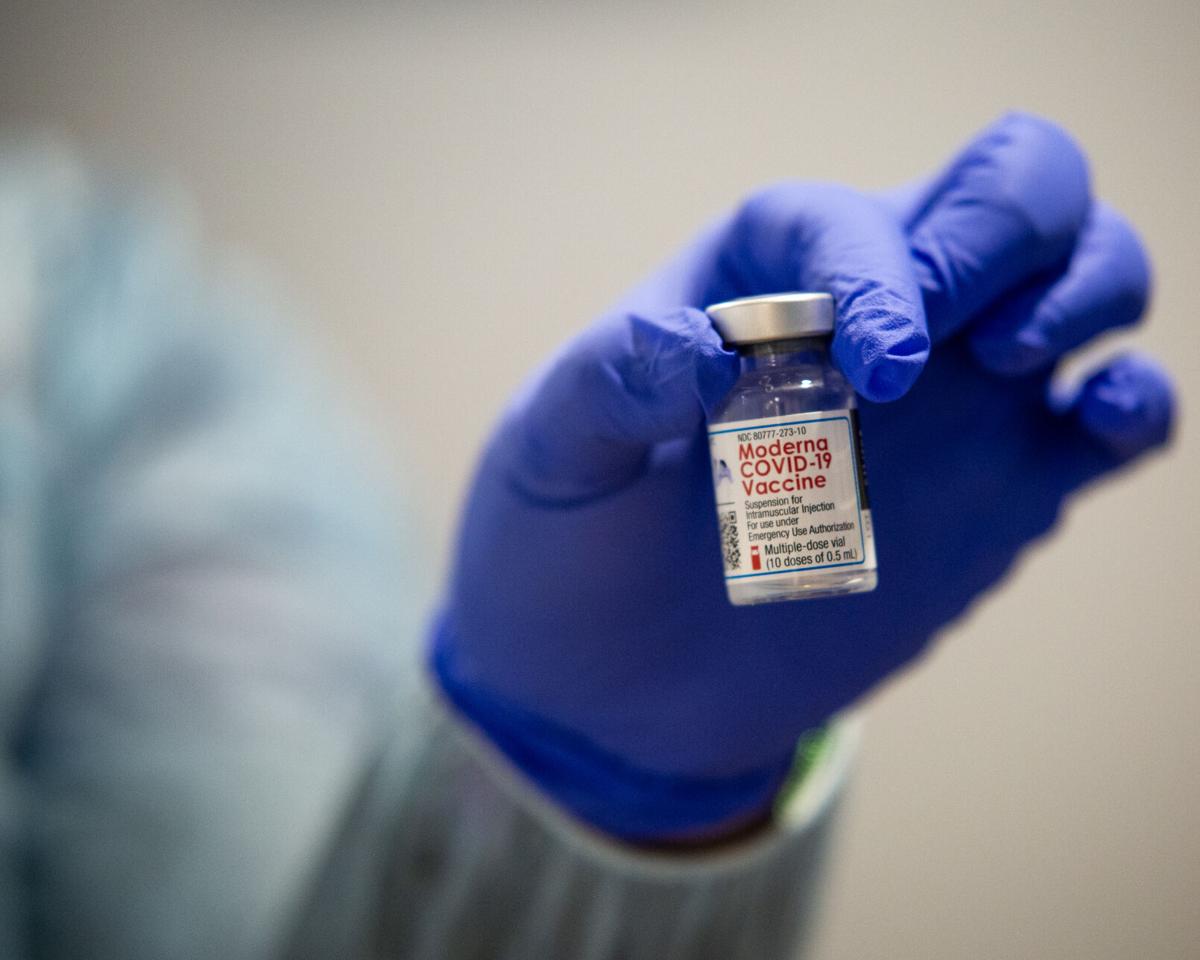 A Williamson County Health Department nurse holds a the first distributed vial of the Moderna COVID-19 Vaccine on Dec. 21, 2020. 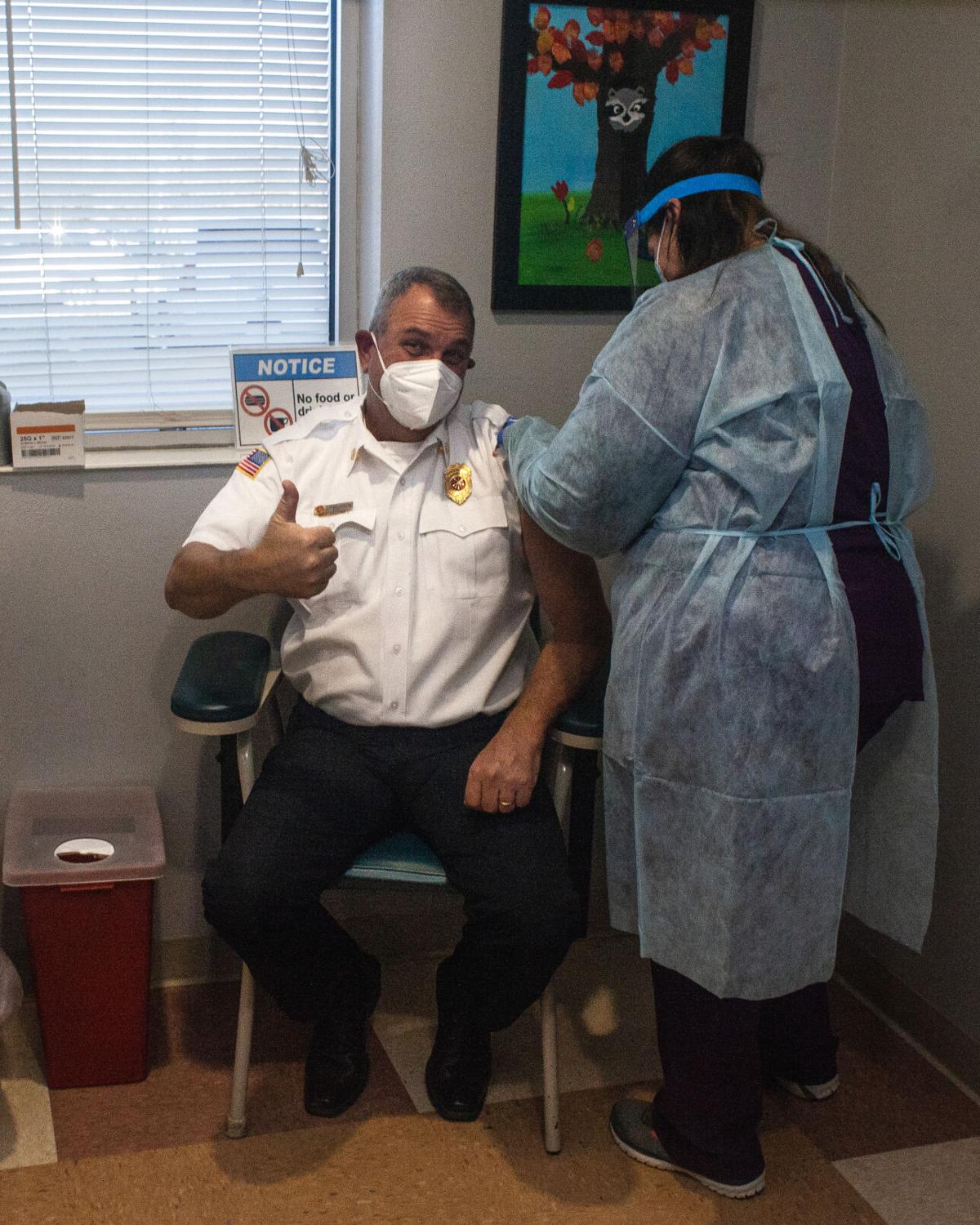 Franklin Fire Chief Glenn Johnson gives a thumbs up while receiving the Moderna COVID-19 Vaccine at the Williamson County Health Department on Dec. 21, 2020.

The Williamson County Health Department issued the first doses of the COVID-19 vaccine to first responders on Monday.

The vaccine was administered by WCHD nurses on Monday afternoon in what on surface looked like any routine medical injection into the left arm, but carried with it historic significance as the ongoing pandemic continues to ravage the state.

On Monday the state reported that a total of 15,848 cases have been reported in Williamson County which now includes 111 deaths and 185 hospitalizations since tracking began in the spring. 2,128 of those cases were listed as active, with a single-day increase of 276 cases.

On Sunday Gov. Bill Lee issued an evening address where he warned against gathering ahead of the Christmas holiday and issued an executive order limiting indoor gatherings to no more than 10 people, but stopping short of issuing a state-wide mask mandate.

“I think it’s the best thing as citizens that we can to try to bring an end to this virus, and I think it’s important to me personally to set an example for my officers and the folks that have an opportunity to take this to certainly lead by example and set a precedent for those who might come after me in taking this," Chief Hughes said after receiving his vaccine shot.

And while he was not given the vaccine on Monday, Williamson County Mayor Rogers Anderson stopped by to thank the first responder group for their leadership.

“I’ll be glad when we can get all of our frontline people vaccinated and eventually out to the general public so that all of us can feel safer as we go down this road,” Anderson said. “Right now our COVID numbers are extremely high, we’re still recommending that people wear those masks and wash those hands and practice social distancing, hopefully we’ll get this behind us in the next few months.”

The vaccine is being distributed by way of the state’s vaccine allocation phase plan that prioritizes inpatient and other high-exposure healthcare workers and residents and staff of long-term care facilities and first responders.

Anderson said that while he is not sure when government officials will be able to take the vaccine, he is anticipating taking the next step in getting past the ongoing public health crisis.

“Personally, I can’t wait until my time comes to get the vaccination and get back to some degree of normalcy,” Anderson said.

WCHD Director Cathy Montgomery oversaw the distribution and said that WCHD had received 1,100 doses of the vaccine on Monday and they're expecting to receive a similar amount in the coming days before regular shipments can be distributed state-wide.

"We are super excited because we have been on the frontlines since March when the first COVID case was detected," Montgomery said. "We've been testing out at the AG Center since the middle of April and we've been there everyday doing mass-testing, and we're testing higher numbers than most of our counterparts in the state, excluding our regional metropolitan health department, so this is overwhelmingly very exciting to have this vaccine."

Montgomery said that at this time they are focused on getting through the first phases of distribution, and added that when the state is able to meet the needs of the general public that the county plans on using the AG Center as a vaccine site.

This is due in part to the facility's size and capacity capabilities especially as recipients of the vaccine are required to wait 15 minutes after receiving the vaccine to be monitored by health officials.

"I'll tell you we are truly blessed to have that facility because our peers in other counties unfortunately are having to test outside and vaccinate outside in the elements," Montgomery said.

Montgomery added that while the county is currently able to store and manage the vaccine, as it is required to be stored in a freezer and prepared in several steps for use prior to administration, they are planning on how to handle large quantities of vaccines as they become available.

"Currently we are looking at additional refrigeration and space for that, certainly when we get to preparing for the mass vaccination, but right now we seem to be pretty equipped," Montgomery said, adding that the Williamson Emergency Management Agency is working with first responder agencies to schedule personnel to be vaccinated as those time slots and doses become more readily available.