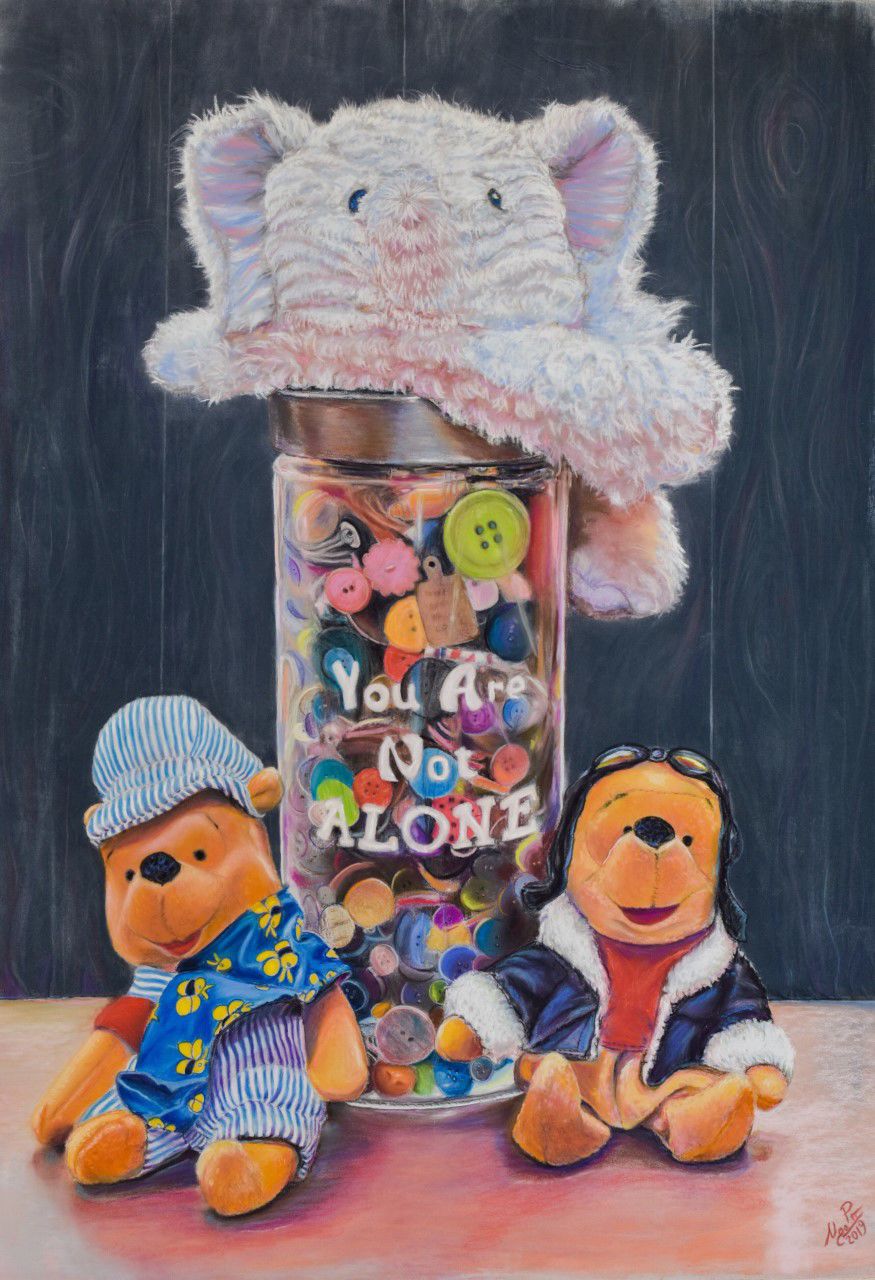 "You Are Not Alone:" A painting created by the father of a child served at Davis House that depicts the 'comfort bears' and 'button jar' used at the center.

A rendering of how a new Davis House location could look.

"You Are Not Alone:" A painting created by the father of a child served at Davis House that depicts the 'comfort bears' and 'button jar' used at the center.

A rendering of how a new Davis House location could look.

Opening its doors to adolescent victims of abuse back in September of 2000, Davis House Child Advocacy Center has remained true to its mission of helping abused or neglected children - as well as holding perpetrators responsible - for nearly 20 years.

Nestled in a small, 2,200-square-foot office just off of Mark Hatcher Memorial Parkway in Franklin, and with a staff of only 10 employees, the center still managed to serve 525 new children in 2018: a number that has grown exponentially every year. However, if current growth trends continue, the center’s executive director, Marcus Stamps, fears some children could potentially be left behind.

What does Davis House do?

Davis House provides investigative and healing services in response to allegations of child abuse; from conducting forensic interviews with victims, which can later be admissible in court, to providing counseling and healing services, the center tackles child abuse on all fronts. The center covers four counties; Williamson, Hickman, Perry and Lewis, and works in tandem with law enforcement on child abuse cases.

“We have never turned a child away in the history of Davis House - I hope that we never have to, because we pride ourselves on finding a way to serve each and every child that needs us,” Stamps said. “However, if our growth rate and revenues does not equal the growth rate in the number of children that we serve, that concerns me significantly. We need to be fully equipped, fully staffed and fully spaced to serve the needs of this community. That has to be not just for a few of the children, that has to be for all of them.”

Davis House’s yearly operating budget has increased year over year; In 2018, the center’s budget was $615,000, in 2019 it was $631,000, and this current fiscal year the center has an operating budget of $709,000. However, the growth of the number of children the center serves has far outpaced its annual budget increases.

Data shows that roughly one in every ten children under the age of 18 will be sexually abused - of those cases, only 12% of them will be reported. Census data shows that there are roughly 62,000 children and teens under the age of 18 in Williamson County. Combining those two figures draws a rough estimate that 6,200 children and teens in Williamson County will be sexually abused in their lifetime, with only 744 of those cases being reported.

With the county’s population expected to double over the next 20 years from roughly 226,000 to 536,000, so too will the number of child sexual and physical abuse cases - a growth figure that Stamps fears Davis House won’t be able to adequately serve if funding doesn’t significantly improve.

“So with our growth in kids, what're we going to do, say stop? ‘We're at capacity, sorry we can't take any more kids?’ We're not going to do that. We can't cut services or expenses - that's just not an option. The only option is we've got to continue to move forward, we have to continue to be aggressive in raising money and getting community support. We have to let people know what we're doing.”

Beyond the needed additional staff, space has also become an issue for the child advocacy center. Sandwiched between Franklin Periodontal and 3D Technology in a strip mall, Stamps said they really need to be operating out of a space at least four times as large.

“We don't have enough space - obviously - so we have been working to find land - or someone who will give us land or an existing building - so that we can grow from the 2,200 square feet we're currently in, to 10,000 square feet,” Stamps said. “That's kind of the dream.”

In addition to providing more counseling rooms, larger waiting rooms and extra space for additional employees, a new location would also allow for Davis House to better cater the experience towards young victims of abuse, such as making the building more welcoming on its exterior.

How the community can help

As a nonprofit organization, roughly 70% of Davis House’s revenue comes from the community, either by individual donations, fundraising events or corporate partnerships.

Residents wanting to help support Davis House can either give a one-time donation, sign up for the Monthly Giving club, or sponsor an individual child - all of which can be done online by clicking here. Corporations or community groups can discuss partnership opportunities by calling the center at (615) 790-5900, and both corporations and individuals can help further by participating in the center’s fundraising events, such as the upcoming Button Ball, set to kick off on March 7, 2020.

And for those who are unable to support the center financially, Stamps urged them to either help spread the word of Davis House and its mission, or to sign up for a free training and awareness program where Davis House Staff will speak anywhere from ten minutes to three hours, educating groups on preventative measures and warning signs of child abuse.

“In my view, Williamson County is number one in so many positive economic aspects; whether it's affluence, wealth, education, you name it,” Stamps said. “We should be number one in protecting our children. We can do that, and that's what we're striving to do. We need the community's help to be the premiere service provider that we are in this county - wherever we can get help, we need help.”