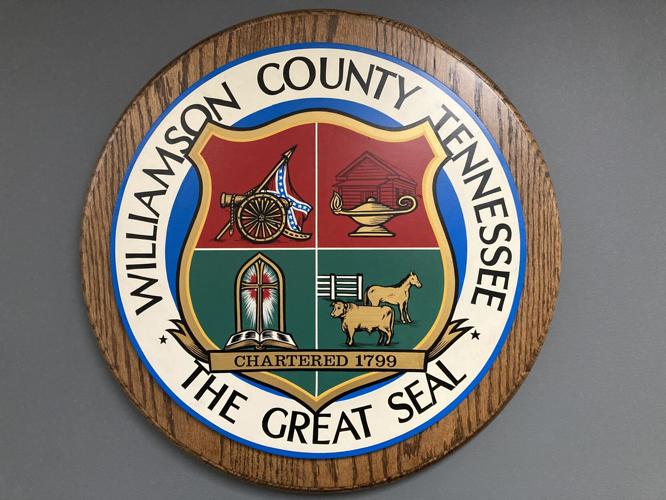 The Williamson County seal is on the wall the auditorium of the Administrative Complex in Franklin. The Tennessee Historical Commission has allowed the county to alter the image of the Confederate flag, which is draped over a cannon in the upper left quadrant. 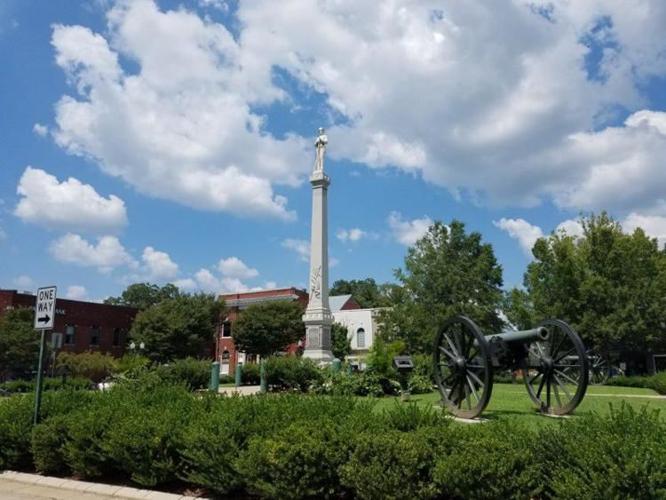 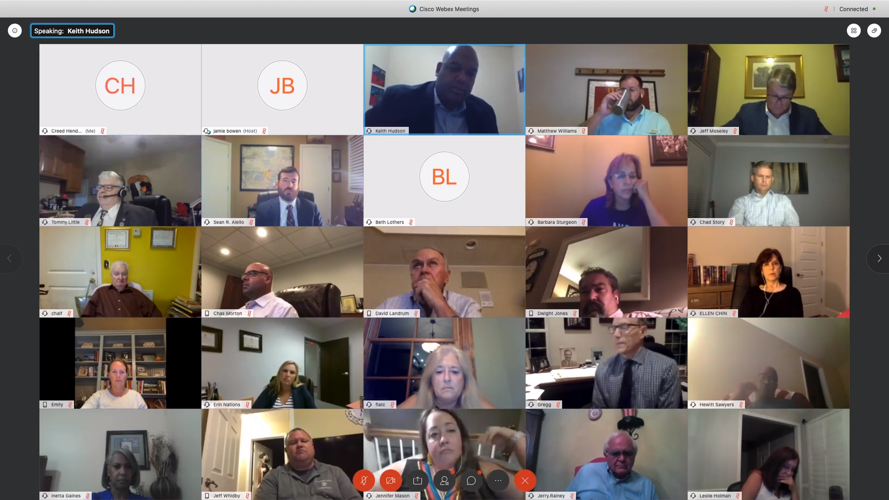 Members of the Williamson County Commission discuss adopting the task force's recommendation to remove the Confederate flag from the county's official seal.

The Confederate battle flag that is depicted on the official seal of Williamson County has moved one step closer to being removed after county commissioners voted Monday to adopt the recommendation of a recently formed task force.

With the county commission meeting lasting hours into the night, Williamson leaders shared a wide range of perspectives before ultimately adopting the recommendation to remove the Confederate flag, with concerns of cost, “dishonoring the soldiers” and more being discussed.

Shortly after the death of George Floyd and the ensuing protests against racial inequality, Williamson County commissioners saw renewed interests from residents in having the county seal altered to remove the Confederate flag.

Some residents had also pointed to the timing of the seal’s adoption as problematic.

While the county was incorporated back in 1799, the official seal hadn’t been adopted until July of 1968 at the height of the Civil Rights movement. It’s this timing, along with studies that show increased adoption of public Confederate symbols coinciding with progress made or demanded by Black communities, that led some residents to believe that the seal’s initial adoption had intentions other than just preserving history.

Not long after Gov. Bill Lee suggested Williamson leaders engage with the community in making their ultimate decision in June, county commissioners approved the formation of a new task force that would be charged with evaluating the necessity of revising the seal.

That task force, which was headed by the chair of Williamson Inc., Matt Largen, ultimately recommended the Confederate flag be removed from the seal in early September.

For the flag to actually be removed, however, county commissioners would need to adopt the recommendation and then forward a request to alter the seal to the Tennessee Historic Commission, where it would then have to be approved by a two-thirds vote.

The task force makes its case to Williamson County commissioners

Present during the virtual meeting to speak on behalf of the task force was Largen, who gave commissioners a summary of the full report made by the newly formed body.

“The social and public intersection is hard to quantify, but what we did learn is that it doesn’t make the pain any less real that some longtime residents feel when they see the Confederate flag on our county seal,” Largen said.

“To those residents who have lived here their entire life, have helped build this community and raised a family here, the flag is not welcoming, it’s not inclusive, but [rather] a symbol of oppression.”

The task force’s report found that the costs associated with altering the county seal on business cards, vehicles and buildings could round out to around $96,000, but Largen suggested that those costs could be “spread over time.”

An example Largen provided was with the large tile floor at the Judicial Center that bears the county seal; while the full cost of replacing it would be around $15,000, the Confederate flag could temporarily be removed for around $20 by simply having it covered.

Concerns of cost, heritage and more

The first commissioner to speak on the matter was Elizabeth Hester, who raised concerns over the cost of altering the seal, and instead expressed her intent to propose a deferral of the proposal.

“That will not cover the cost of putting in a new seal, new quadrants, etc. I am really not happy about this whole thing. I do appreciate the task force, but I do not think this issue has been covered sufficiently.”

Commissioner Barbara Sturgeon also expressed concerns with voting to alter the seal, but instead raised concerns over ‘rushing to remove heritage.’

“In a time right now in America where there’s a rush to remove our heritage, a rush to remove anything that symbolizes our history in what makes America, America.... I think it’s a terrible time to be erasing something from our seal,” Sturgeon said.

“I’m not convinced that a majority of Williamson County [residents] are for this. I like the idea of a deferral if that would include some kind of an assessment of what the people who live here really want.”

Sturgeon continued, arguing that to remove the Confederate flag from the seal would be a disservice to those who died during the Civil War.

“That’s what it meant originally, and I don’t think the meaning has changed just because some people have decided that the Confederate flag is racist… that was never the intention when it went on there. So if it has to go, it needs to be replaced with something that honors the soldiers that died in the Civil War - our Williamson County soldiers, the ancestors of the people that live here.”

Commissioner Keith Hudson appeared to take issue with Commissioners Sturgeon and Hester for their push to defer the vote, arguing that the matter had been well discussed, vetted and publicized at that point, and that any request for deferral was simply a means to push the issue “back further and further.”

“I think that some of my peers may decide to vote for a deferral just simply to push it back further and further without voting at all,” Hudson said.

“It’s disheartening that we would even contemplate on saving a symbol that is a universal hate symbol. Now, I agree that there may be a portion of heritage - but you can’t deny in this diverse county that this is a symbol of universal hate.”

Hudson continued, casting doubts as to the circumstances of the seal’s adoption as being anything other than a direct and negative message to the Black community at large.

“Even when I suggested that we vote on it last month, a lot of you said that you wanted to hear what the task force had to say. Here we are tonight, the task force has given their recommendation; yet and still, we see that we’re going to back-play and downplay.”

The recommendation will now move to the Tennessee Historic Commission where it will need to pass by a two-thirds vote before approval.