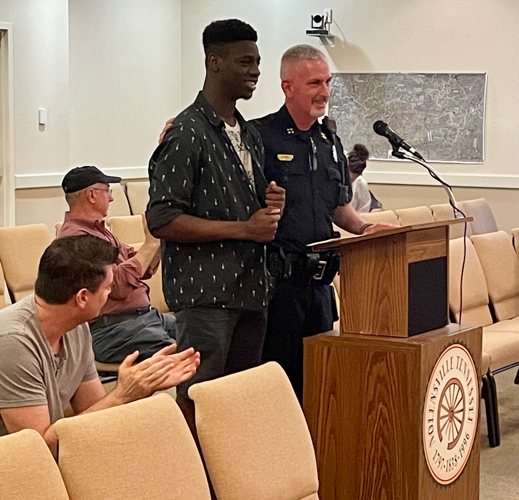 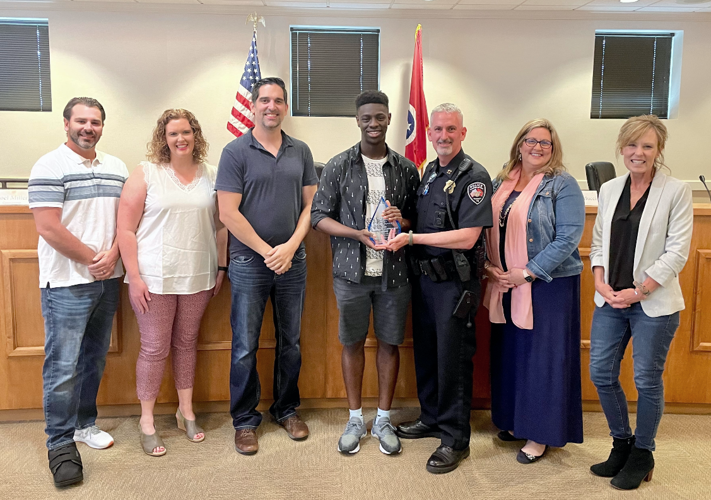 The Nolensville Police Department and Nolensville Board of Commissioners recently recognized a Nolensville teen with NPD’s first Community Partnership Award.

18-year-old Ifedayo “Dayo” Ayewale is a Nolensville High School senior who was filming a music video in the early morning hours one day a few months ago when Nolensville Police stopped to see what was happening as Ayewale was in the middle of a street, a meeting that would prove positive for both parties.

"The circumstances were a little different because it was 2 o’clock in the morning, but the intent, the goals of our officers, was the same. In this way we support the community, and because of our goals, we were able to make a contact within our community that could help support us with our mission," NPD Assistant Police Chief Mike Terns said in an email. "There are a lot of talented young people in our community, and we want to create positive interactions with as many of them as possible. When we can, we would like to collaborate with them to form lasting relationships, and something great, like with this video."

Ayewale was recognized at Nolensville Town Hall on Monday with the department's Community Partnership Award which recognizes “outstanding dedication and assistance in furthering the Nolensville Police Department" for donating his time and skills to the department.

"This was the first time we have awarded a citizen with an award, and he absolutely deserved it," Terns said.

Ayewale said in a text message that this was his first professional-level project that posed its own challenges but ended up a success.

"By the end of it I’d learned a ton more about planning, working with people on set, camerawork and techniques, the directing and editing process, and I feel like I was able to really grow as a filmmaker, and build on what I already know," Ayewale said. "I’m super glad I got to film with them, the folks at the NPD were all incredibly fun to work with, and I appreciate them recognizing me for all this."

"Anyone who sees the video can see Dayo’s passion and talent for creating digital media," Terns said. "It has been a great honor working with Dayo to create this video, which we did by aligning our busy schedules over the course of 3 months."