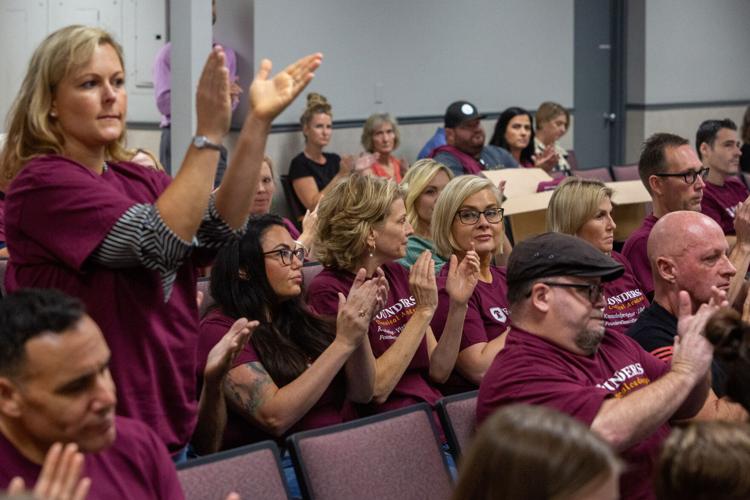 Supporters of Founders Classical Academy of Brentwood applaud during a public comment section of a Sept. 21 meeting at the Williamson County Administrative Complex in Franklin as part of the appeals process for the proposed charter school. 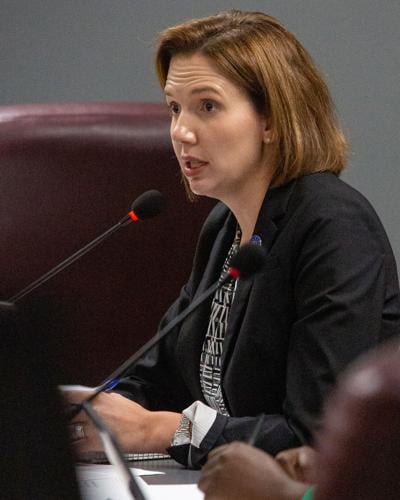 The Commission also unanimously voted down the proposed Founders Classical Academy of Hendersonville during the same meeting, ending the current bid for the schools.

Normally this would happen in one meeting, but Founders agreed to holding two meetings following the death of a family member of one of the WCS representatives just days before the Sept. meeting.

Both meetings were overwhelmingly attended by citizens in support of Founders, wearing matching maroon Founders shirts, and those supporters filled every in-person public comment slot during the Sept. meeting, while comments were collected from those for and against the charter school online.

Those meetings were the part of the appeal process following the July vote from the WCS Board of Education that denied Founders’ original application.

Founders Classical Academy of Brentwood representatives spoke about their goal to give parents a choice in their children's education without resorting to private schools, focusing on a "classical education."

“We’re a kindred spirit with the Williamson County Schools System in this way, we want to do what’s best for public education," Founders Board Member and Brentwood resident Mitch Emoff said during the Sept. meeting. “And instead of people flocking to private schools, let’s give them a choice in the school system structured in Williamson County as a public-tuition-free option.”

WCS expressed a lack of confidence in the charter school on a variety of fronts, while acknowledging that the applicant did respond to and try to address the feedback given by the WCS Board of Education.

“After a rigorous review process, Williamson County Schools found that Founders Classical Academy of Brentwood failed to meet the standards set forth by the Tennessee Department of Education,” WCS In-House Attorney Dana Ausbrooks said in the Oct. 3 meeting.

“The review team did determine that they [Founders] met the academic standards, however, the available evidence indicates Founders Classical Academy of Brentwood is not prepared to oversee the variety of school operations that ensure each school day run smoothly."

The State ultimately agreed with WCS, with Tennessee Public Charter School Commission Executive Director Tess Stovall telling the commission that she had concerns over the proposed school’s ability to serve students with disabilities, their financial planning and backing, and a “lack of understanding of Tennessee law, Tennessee context and Tennessee academic standards.”

“I do think this [Founders] governing board has clear ties to the Williamson County community, they have a diversity of experience, but what is lacking is expertise in academic school leadership to hold the charter management accountable,” Stovall said. “That is the key role of a governing board.”

Founders supporters also spoke at the Oct. 17 meeting, but no WCS representative was present at the state meeting.

Commissioner Jamie Woodson questioned why no WCS representative came to the hearing or issued a written statement for Monday’s meeting, something that the district is not required to do having already issued comments during the previous public hearing held in Franklin.

Stovall called the lack of WCS representation a “missed opportunity.”

Several commissioners acknowledged their support for school choice in general and advised parents to continue voicing their concerns to WCS and engaging in the conversations and processes to address any educational deficiencies.

"I am sure that this is not the last time that your school system is going to hear from you, I hope it's not, because that's really where it ought to begin; they ought to recognize the need within their own community, where you all live, where you put your children, where you get them educated, that they ought to step up and do it," Tennessee Public Charter School Commission Chair Tom Griscom said. "I hope they do it, because you've got a voice."

The Oct. 17 vote from the state’s charter school commission is the final decision in that appeals process.