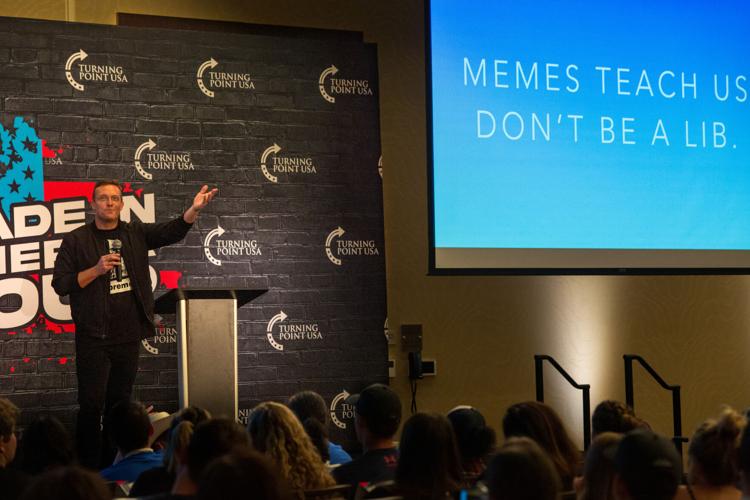 Benny Johnson speaks to students and other community members in Franklin on Sept. 21, 2022, during Turning Point USA's Made in America Tour. 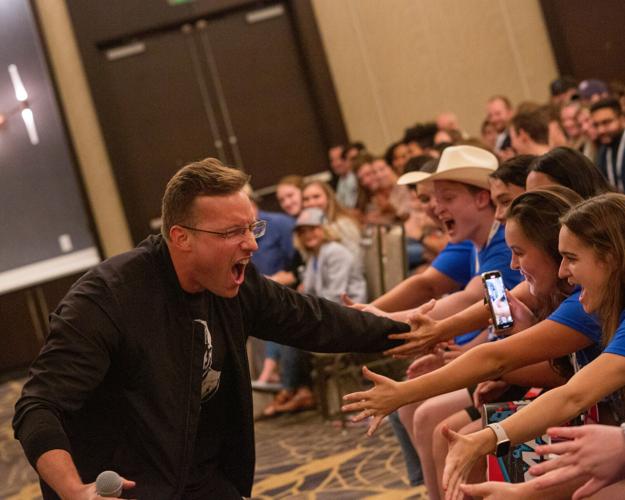 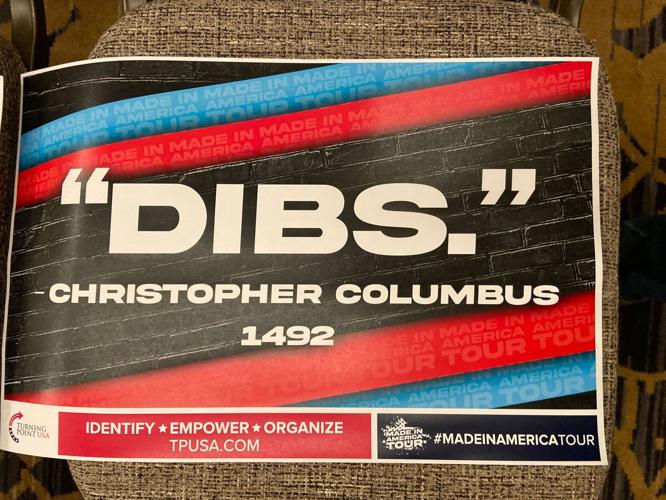 Signs provided to attendees during Turning Point USA's Made in America Tour in Franklin on Sept. 21, 2022.

Conservative activist organization Turning Point USA brought its Made in America Tour to Franklin last week, where dozens of Williamson County students gave self-proclaimed “conservative creator and social sensation” Benny Johnson the rockstar treatment as he spoke about how to fight the “culture war” with memes and ridicule.

Johnson was previously employed byBuzzFeed but was fired in 2014 after the outlet claimed he committed more than 40 instances of plagiarism. He has also worked for TheBlaze and National Review, among other publications..

“Why do a show on memes? Because the memes hurt their feelings,” Johnson said during the premiere of his online show “The Left Can't Meme,” which is exclusive to Nashville-based social media platform Parler.

According to their website, that field program “consists of 24 full-time field representatives nationwide that exist to educate, support, train, and empower high school students to become freedom-loving activists within their community.”

The overt conservative nonprofit also has more than 700 high school chapters nationwide, including at Franklin High School, where they supply student activists with activism grants, activism kits (stickers, pamphlets, etc.), and host a “professor watchlist” and “school board watchlist.”

Days before the event, Williamson County Schools publicly called for all references to Nolensville High School be removed from TPUSA’s advertisements for the event, adding that WCS had never approved the function to take place at any school facility.

The Sept. 21 event drew around 100 people in a conference room of the Hilton Franklin Cool Springs, with several booths set up in the lobby for other conservative groups such as the Williamson County chapter of Moms for Liberty.

Among the crowd were high school, middle school and elementary school students and college students, as well as parents and local Republican Party activists.

“What I want to do tonight is talk about how great it is to be in America and kind of reprogram with some humor,” Johnson said. “I like to laugh — Ridicule is my weapon.

Johnson’s latest example of “owning the libs” was displayed with a video of a person kicking over a projector at Johnson’s presentation two days prior at the University of Iowa, a video which was then made into a series of memes that were shown to the crowd in Franklin to cheers, laughter, and Johnson’s own exaggerated cackles.

That fatalistic perspective is not uncommon among the contemporary conservative commentators, including Turning Point founder Charlie Kirk.

But instead of presenting serious ideas and arguments, Johnson instead relied on familiar conservative talking points with an, at times, almost slapstick delivery.

The TPUSA event took place just one week after Florida Gov. Ron DeSantis sent South American asylum-seekers by air from San Antonio, Texas, to Martha's Vineyard under false pretenses in an act that has now sparked a criminal investigation in Texas and calls for a Federal investigation.

That humanitarian crisis only served as fodder for Johnson and his analysis of “Illegal” immigration and border security, and an opportunity to insult the Biden administration, former President Barack Obama, and coastal elitism, as well inner-city drug addiction, homelessness and crime in what Johnson framed as “a battle between dark and light.”

Other fatigued topics included fawning over the Second Amendment, COVID-19 lockdowns, “Libs” and “Leftists,” accusations of Communism and Marxism, “the abortion cult,” and warning against attending college, all while claiming to value classical liberalism, freedom, Christianity, diversity of thought and civil dialogue.

“We love this country in spite of them [non-conservatives] trying to destroy it because they’re a bunch of jackasses,” Johnson said to laughter and applause. “We're going to laugh at them, because if you're happy, and if they're miserable — and trust me, they're miserable — Then you've already won.”

While Johnson advocated in reveling in the misery of others, he cried foul at online commentaries and the memeification of Utah Republican State Senate candidate Linda Paulson, whose campaign rap went viral online.

“What they did to Linda is so evil,” Johnson said. “They roasted her down like the last… They were so mean to her. OK, it was so mean, she was at the top of Reddit for like seven days, just the nastiest, evil, profane comments you could possibly imagine about sweet Linda who just wants to run for office.”

Williamson County Schools has recently repeatedly shown high academic results, evidence that the politically-engaged students are capable of understanding and engaging in a serious dialogue about ongoing political and social issues.

That eagerness was exhibited during a Q&A segment that included questions from students about how to handle being “called out falsely for being racist or homophobic” and how to handle their classmates who “insist on being called by a false pronoun.”

Johnson advocated for the mandatory arming of teachers when asked about the topic by one student who said vaguely, “In Tennessee, very much so, I feel grateful that I’m protecting the school.”

Johnson also gave other advice on fighting the “culture war,” a term he said he preferred to “civil war,” adding that he believes that the best way to prevent a civil war is to not allow “the dehumanization of human beings.”

The event did not take place on school property, and according to WCS Superintendent Jason Golden, student clubs are protected under the Equal Access Act, meaning that the district can’t influence the content of the clubs following their creation through an application process.

“We worked with Turning Point once we knew he [Johnson] was coming to help plan and volunteer to help set up,” Maclean said. “I’m glad to see so many students in the room interested in hearing from Benny Johnson; it was great.”

In June, Mclean and two other students were sponsored by The Republican Women of Williamson County and traveled to the  2022 Turning Point USA Young Women's Leadership Summit in Texas.

When asked to respond to comments made during the TPUSA event, Golden spoke about the district’s commitment to support all students in a safe environment.

“One great thing about Williamson County Schools is we focus on our vision and mission,” Golden said. “We serve everyone. Public schools serve everyone. Our vision statement is that Williamson County Schools will provide a supportive environment that challenges students to excel in academics, athletics and the arts, and we know that in the community, there are many issues, and we respect that, but we must focus on our mission.”

Safety concerns from WCS students have been expressed publicly in recent years, including in May of 2022 when a racist incident sparked protests inside of Ravenwood High School and earlier this month when Independence High Schools’ Black Student Union Group was criticized by some community members and groups in what some supporters of the student club called “fake outrage.”

Johnson declined to answer any questions from the Home Page, citing a contractual agreement with Turning Point not to do interviews.