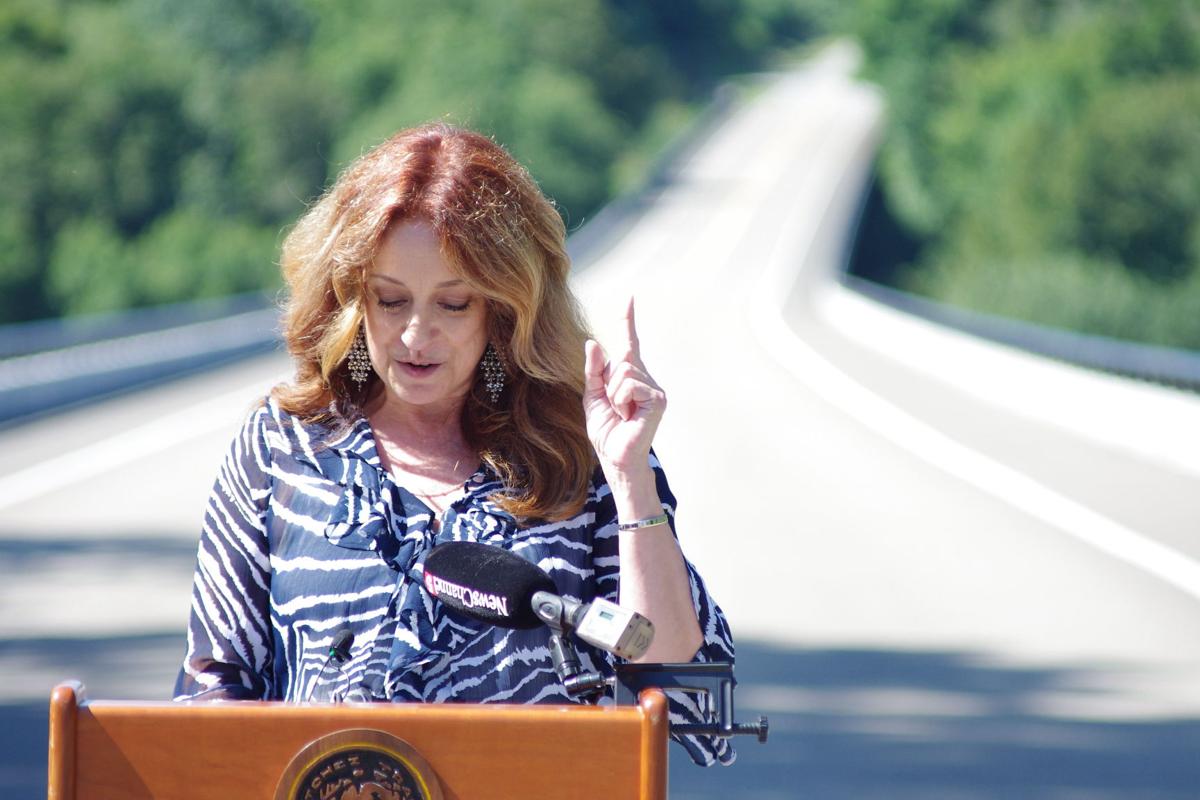 Trish Merelo, who lost her son to suicide at the Natchez Trace Bridge, speaks during the call box unveiling Wednesday. 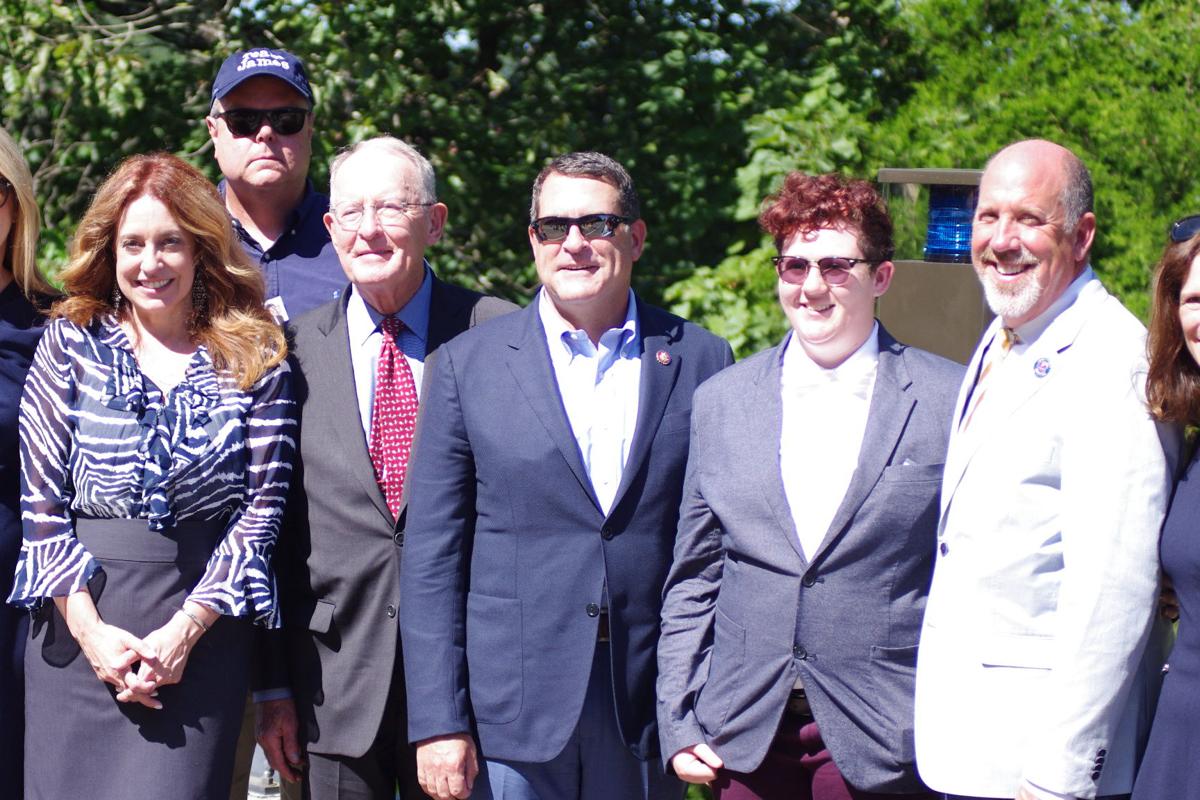 Trish Merelo (left) stands next to Senator Lamar Alexander and Mark Green during the unveiling Wednesday. 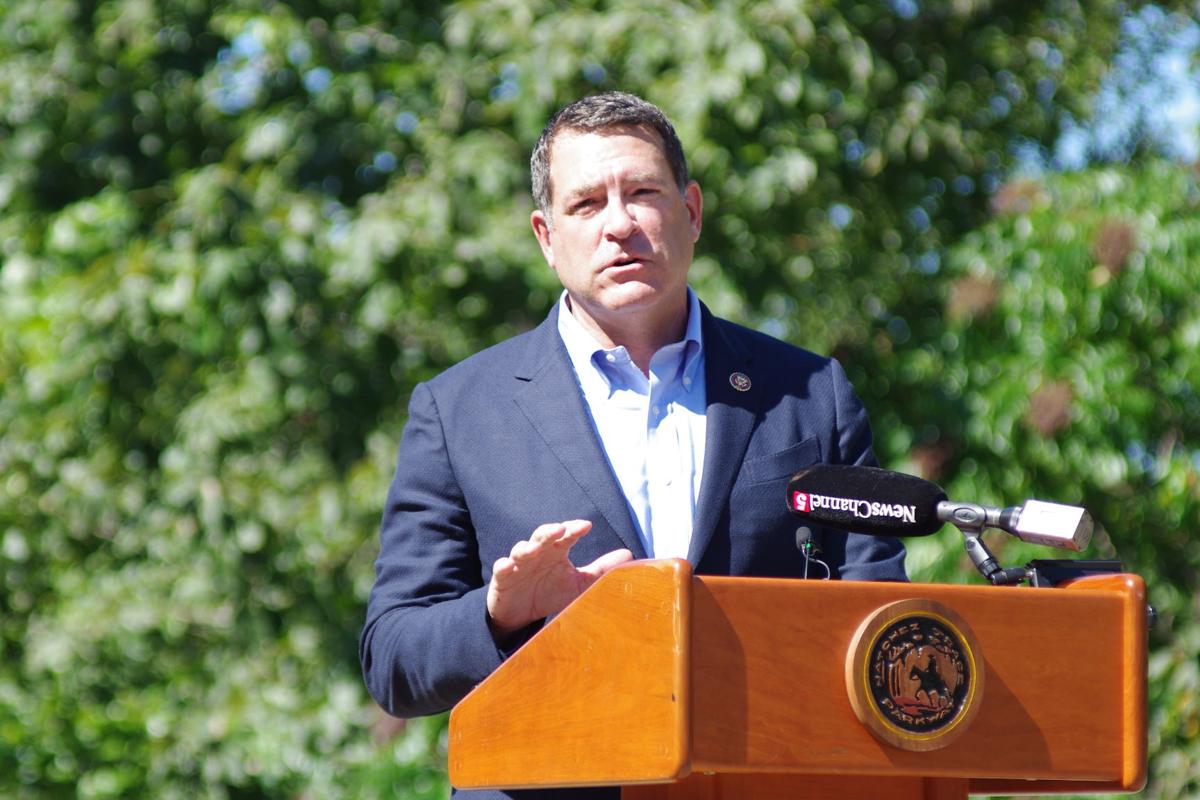 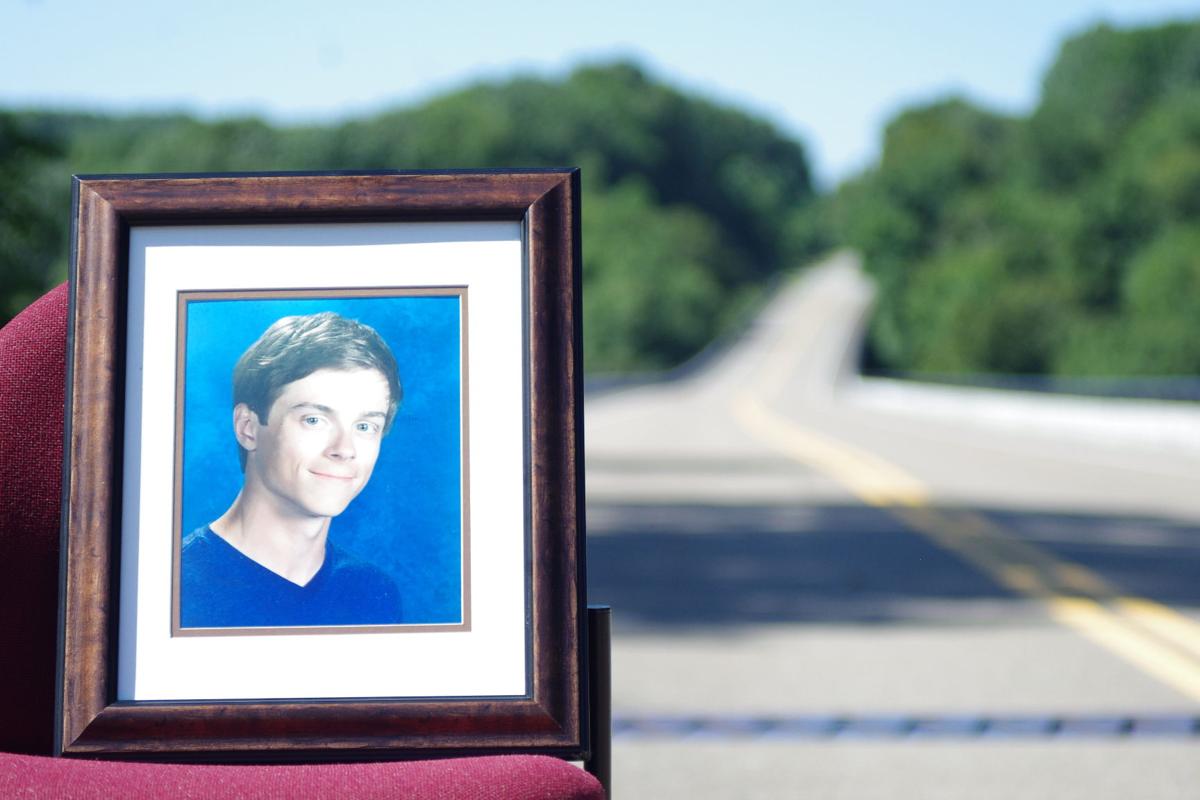 A portrait of Trish Merelo’s son sits in front of the Natchez Trace Bridge.

On Monday, Aug. 26, the tally of lives that had been lost to suicide at the Natchez Trace Bridge was sitting at 32, according to the Williamson County Sheriff’s Office. At around 6:15 a.m. on Tuesday, that number climbed to 33.

On Wednesday morning, suicide prevention activists, elected officials and National Park Service (NPS) staff gathered at the iconic bridge to unveil one of the first significant measures to curb suicides at the bridge — emergency call boxes, one placed at each end.

While the new call boxes garnered praise and celebration during the unveiling, Chief Ranger Sarah Davis with the NPS confirmed with the Home Page that the bridge had seen the loss of yet another life just a day prior.

“[Sheriff’s deputies] were here, and as they were going off shift, they found a vehicle in the middle of the bridge,” Davis said.

Suicides at the bridge are, unfortunately, nothing new. Since the first confirmed suicide at Natchez Trace Bridge back in the year 2000, 33 people have lost their lives at the scenic spot, with 11 of those occuring since 2015. Following what she called a “spike” in suicides in recent years, Davis said the NPS started having serious discussions as to how to solve the crisis.

“That’s when [NPS] Superintendent [Mary] Riser and I started really looking into what was going on,” Davis said. “We started working with other parks that have similar situations, [and] one of the things they recommended is, ‘you need to take steps’ — one of those steps was putting in call boxes.”

Supervisory U.S. Park Ranger Daniel Kimes, who personally had a hand in installing the new call boxes, explained to the Home Page how the call boxes work.

“These call boxes are cellular-based, solar-powered, so there’s a battery inside that will keep it running at all times, and then the solar panel will keep that battery charged — that way it runs through the night, and then during the day it will recharge,” Kimes said. “There are two buttons available; the first is the Tennessee Crisis Line — that would allow someone to call for help if they’re in some kind of mental or emotional situation and they want to talk to someone who is trained to help them through that. The second button is the emergency 911 — that will reach the 911 dispatch at Williamson County at the Public Safety Center.”

Kimes further explained that hitting the button to contact the Tennessee Crisis Line does not alert law enforcement of any kind, and was designed that way as to not deter those suffering an emotional crisis on the bridge from reaching out for help.

While elected officials such as U.S. Sen. Lamar Alexander, U.S. Rep. Mark Green and State Legislator Sam Whitson, as well as the NPS were all instrumental in seeing the call boxes finally realized, perhaps no one was more instrumental than Trish Merelo.

In 2016, Merelo lost her 17 year-old son to suicide at Natchez Trace Bridge. It wasn’t long after that Merelo had made it her life’s purpose to see that not another person would be lost on that bridge, and spent months reaching out to as many elected officials and NPS members as she could.

Earlier in August, Merelo’s goal became all the more real after the NPS publicly confirmed that $1.2 million had been secured for barriers to be installed on the bridge, with construction expected to begin in 2023. The NPS also announced for the first time its plans to have call boxes installed on the bridge, something Merelo called a “supplement to the end game of getting a barrier put in.”

During the unveiling Wednesday, Merelo thanked Whitson, Green and Alexander for their efforts in preventing further suicides at the bridge, and lauded the call boxes as an effective tool to “interrupt that [suicidal] train of thought.”

“Cell phone coverage here at the bridge is not very good, and often those seeking to take their lives will leave their phones behind,” Merelo said. “My son left his phone, very much on purpose, on the kitchen counter the night he came here. The call boxes will provide an anchor, a life ring, allowing someone a last chance to seek emergency help before making this most tragic of decisions. A decision that is catastrophic to the person who makes it, to the family left to a lifetime of wondering why, left to a lifetime of replaying last hours and days with their loved one.”

Green also spoke during the unveiling, and said he was “overjoyed” to see measures to prevent further suicides at the bridge finally beginning to be realized. Green also thanked — which he remarked was unusual for him — the press coverage of the issue, and its role in bringing the topic of suicide at the bridge out into the open.

“The Nashville news and the Franklin, Brentwood Home Pages have done a fantastic job catching the balance on this, because if you talk too much about it, you create a draw to the bridge, but the public needs to be aware,” Green said. “So I think our media in our state and in our community has really struck a good balance, especially the Home Page.”

Ultimately, however, Green said his biggest thanks was to Merelo.

“But really, the biggest thanks goes to [Merelo],” Green said. “She had made this her life’s work, and took an incredible loss — an unbelievable loss — and has turned it into something that will probably save hundreds of people’s lives. My son’s in the military, so he’s deployed, and my wife and I, unfortunately, think about this. Fortunately, we haven’t had to deal with it, but those who have, who’ve lost a child… I can’t imagine it. To know a woman like [Merelo] who took that, acted upon it and made this her life’s mission… I can’t admire anyone more.”

Whitson, while unable to attend the unveiling, was also extremely thankful to Merelo for her efforts, as well as to Green, Alexander, NPS staff and to his colleagues in the Tennessee General Assembly.

“It’s a step in the right direction — anything that we can do to prevent another tragedy out there would be welcome,” Whitson said. “The team that started it, [Merelo] and them, they really put a personal touch to that [that] really resonated with us.”

Whitson said that after hearing of Merelo’s goal to see suicide prevention measures put in place at Natchez Trace Bridge in late 2018, he quickly reached out to Green. Whitson said after informing Green of the crisis at the bridge, Green visited the bridge “within an hour or two, checking on it himself.”

Alexander also made it a point to personally thank Merelo, but also singled out the NPS for their swift action on the matter.

“The National Park Service has moved very rapidly on this,” Alexander said. “They don’t always get credit for doing that, but they have in this case, and the fact that they came up with the idea of call boxes, we hope will help. I can see how if you’re alone and afraid out here and perhaps never have thought before about suicide, that having access to a lifeline could help.”

While one life has already been lost at bridge this year, local law enforcement hopes that with the call boxes, as well as with the soon to be installed barriers, that Tuesday’s loss may be the last. One such person is Williamson County Sheriff Dusty Rhodes, who recounted his encounter with the very first suicide at the bridge back in 2000.

“I remember it like it was yesterday,” Rhodes said. “I just remember us getting the call, and I was thinking this is uncharted territory for the sheriff’s office. We pulled up on the scene down here, and it was an older lady on the roadway. I can just remember seeing her face. It was a shock.”

While Rhodes was pleased to see the call boxes finally installed, he noted that “a lot more needs to be done,” and said he looked forward to continued solutions to crisis.

“Someone once said, ‘when we have the courage to do what we need to do, we unleash mighty forces that come to our aid,’” Merelo said. “You are the mighty forces that have come to our aid, and to the aid of those in the future, who find themselves in that place, devoid of light, looking for something sure, quick, and available. By the actions set forth by the National Park Service with this installation, and with the plans underway for a barrier, lives will be saved. It’s not something in the abstract — it’s a fact.”

“We look forward to next steps, continuing to work together, and finally uncorking the champagne when we have an approved plan. We’re not waiting until 2023 to celebrate, we will when there’s an approved plan. We thank you all, from the bottom of our hearts.”