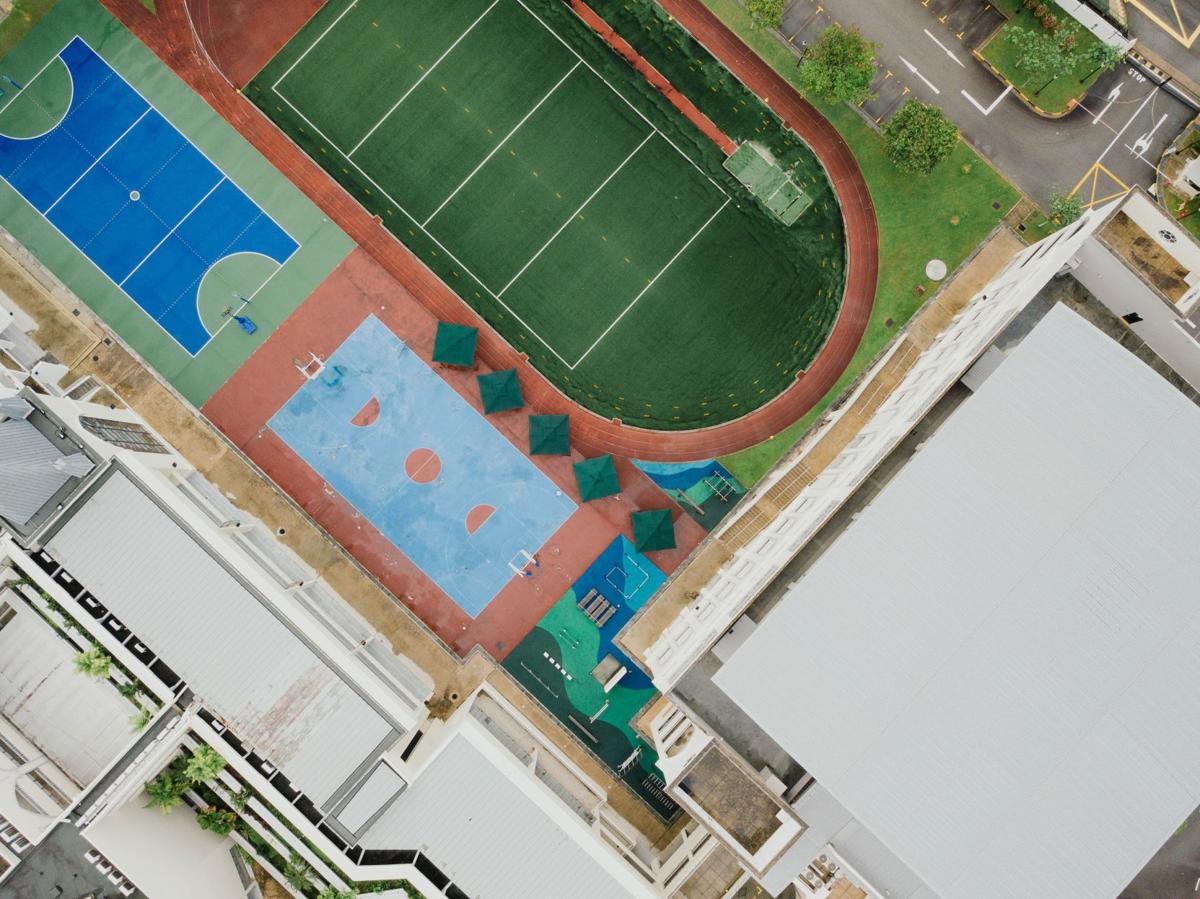 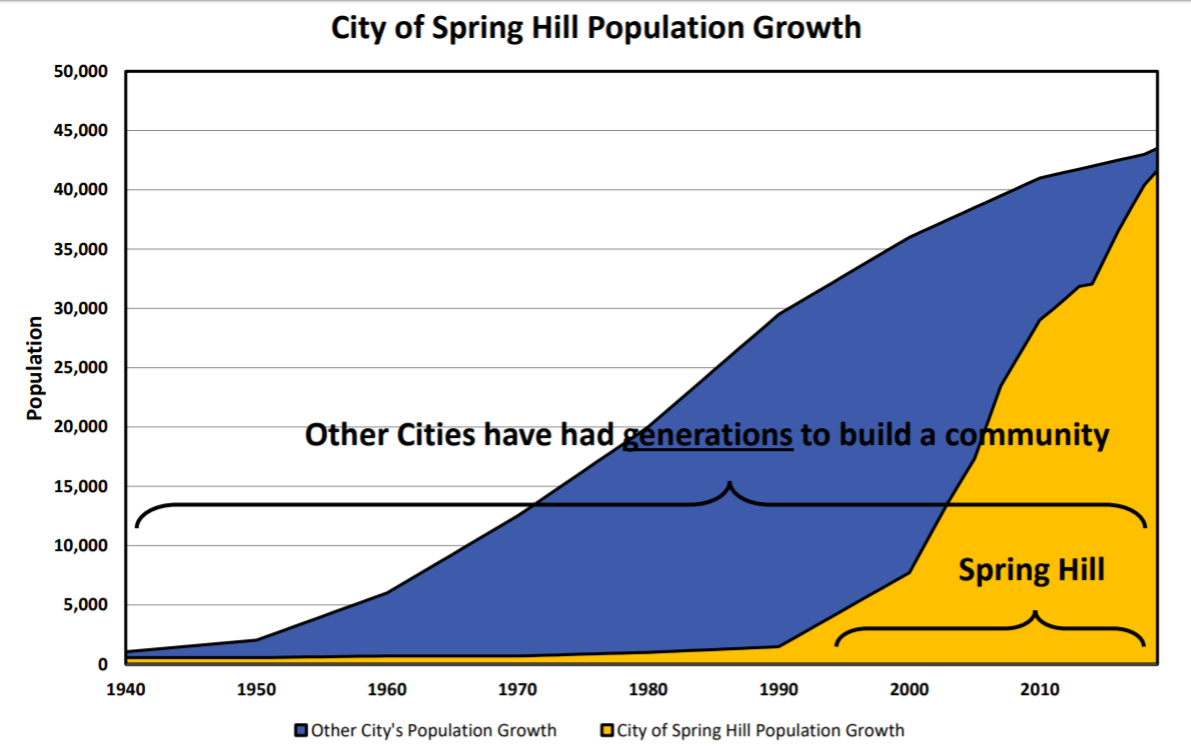 A chart shown during the Sportplex Task Force's presentation Monday visualizes Spring Hill's population growth when compared to the vast majority of other U.S. cities. 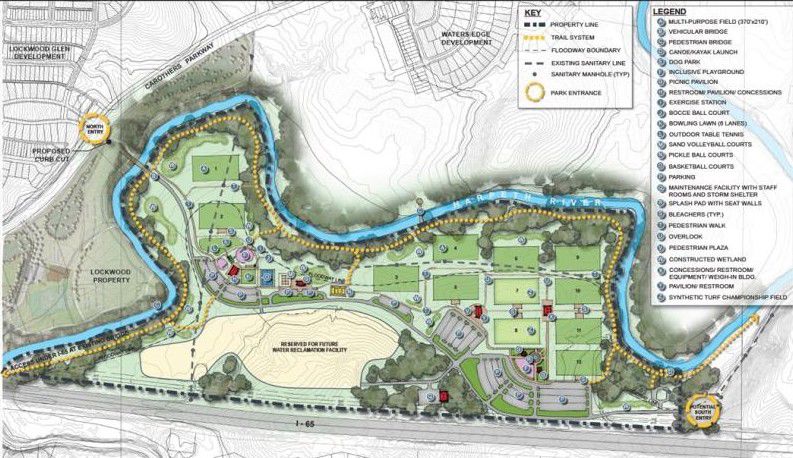 The 180-acre Southeast Municipal Complex Park in Franklin is currently in the early stages of its development, but was used by Duda during his presentation as an example of a multi-use complex.

After months of research from the Spring Hill Sportsplex Task Force, members Jeff Graves and Jonathan Duda presented their findings on the feasibility of the city constructing its own sportsplex to the city board on Monday, with Duda calling the need for more recreational and sports facilities in the city "critically immediate."

What is the Spring Hill Sportsplex Task Force?

The Sportsplex Task Force is a body of individuals hand-picked by Mayor Rick Graham that acts as an advisory committee to the city's board of elected officials in regards to all matters related to the development of a sportsplex. A sportsplex is a mutli-purpose development that features multiple sports facilities, such as baseball fields, tennis courts and track and field stadiums.

Spring Hill is behind the curve with its recreational offerings

Spring Hill has seen unprecedented growth ever since the Saturn General Motors Plant first opened its doors in 1990, with certain portions of the city being named the single fastest growing area in the state. Duda argued the city has simply not been able to keep pace with the growth, particularity in its recreational offerings.

"Almost every decision you make is in [the] lens of the growth that the city of Spring Hill has experienced, but it’s important to tell the community, [however, that] 95 percent of the cities out there [have] had 70 years - generations - to build a community," Duda said. "Spring Hill has had a condensed period of time to really build a community, and that’s to take care of roads, Parks and Rec., theatre needs, police [and] fire."

Graves followed up on Duda's comments by bringing the board's attention to a sample of projected recreational needs as outlined by the city's Parks and Recreation Department back in 2012.

In those projections, the Parks and Rec. Dept. projected - based on population growth at the time - that the city would require eight baseball fields by 2020 to adequately serve its population, with the city only having three in 2012. As of November, 2019, the city still only has three baseball fields.

For Basketball courts, the projected amount needed by 2020 was eight, with the city only having three in 2012. As of November, 2019, the city has four basketball courts. Graves continued to list examples of the city's inadequacies as far as its recreational offerings, setting the stage for the task force to suggest its recommended solutions.

"The rapid growth of the city has already outgrown our current local recreational and sports facilities - I know you all know that, but if you don’t say it, you won’t move forward," Duda said. "You’ve got to understand that the need for action to meet those needs is immediate - it’s critically immediate."

"One of the biggest discussions that we have had as a task force has centered around [this]," Graves said. "Do we need to focus on the local need - because there is a huge local need for baseball, softball fields, soccer fields [and] multi-purpose fields - or, are we focusing on a sportsplex that is an economic and tourism driver?"

Ultimately, the task force recommended that the city "explore all opportunities to construct a sports complex," and asked the board to consider placing a $50 million placeholder on to the city's Capital Improvement Projects list (CIP) for future consideration.

Placing the project on the city's CIP would also help direct additional funds towards the project, as the revenue generated from the property tax increase that passed back in April, which is projected to be close to $5 million annually, is restricted to being used on projects listed on the city's CIP.

Duda argued that in addition to meeting the recreational needs of Spring Hill's residents, a 100 - 500 acre large sportsplex could be a driving economic force in the city.

"Cities that are successful at bringing in corporate headquarters, economic development... those cities provide not only the cost of living, school quality and housing costs - things you can quantify - but they also provide the outdoor and recreational experiences," Duda said. "They provide the reputation and the selling of the city - when they come and do site visits, they want to see that your curb appeal matches what you’re saying you’re providing."

"As you’re talking about building roads, this is just as critically important to bring in the corporate headquarters."

Duda also made that were Spring Hill to have its own mega sports facility, not only could it keep current residents from spending dollars outside the city over the weekends, but it could bring in large swaths of people from all over Middle Tennessee for tournaments, events and more.

"There is not a regional facility in Middle Tennessee - there is a huge opportunity there," Duda said. "So what’s happening to folks in Williamson County and in Spring Hill in particular on the weekends? They’re going out to other places to go play their tournaments. We can bring that here potentially."

The board appeared visibly pleased with the presentation, with Mayor Graham calling it "well worth the time." The Sportsplex Task Force is set to present the board with a final report of its findings in the first quarter of 2020.