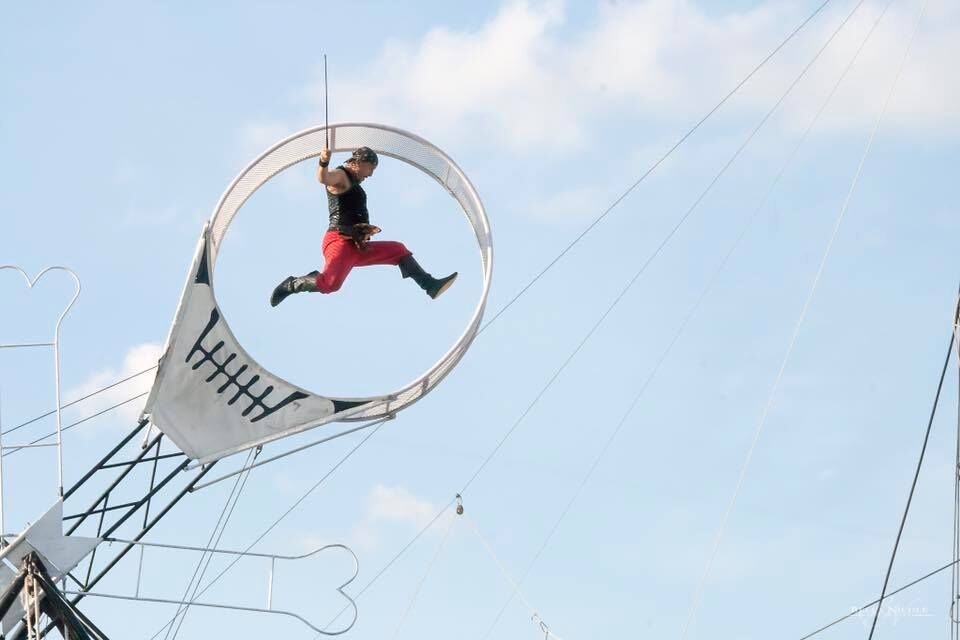 A member of the Pirates of the Colombian Caribbean troupe leaps inside the "rotating wheel of death." 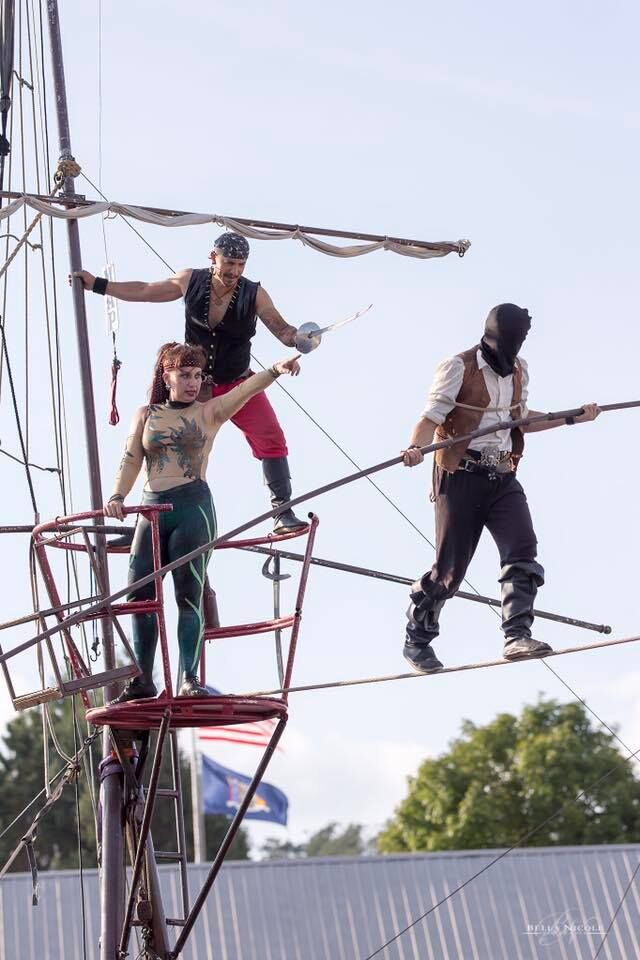 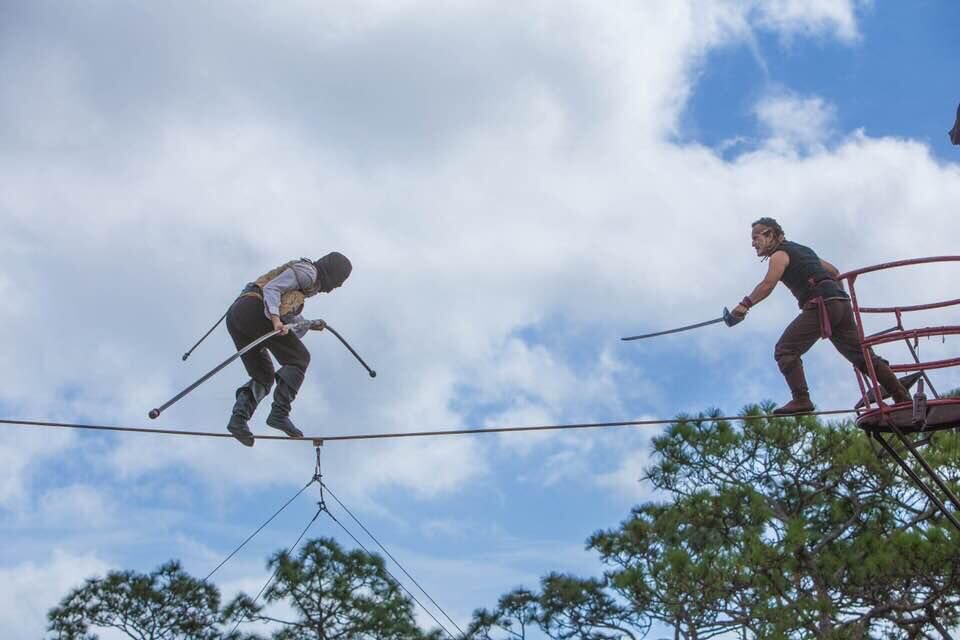 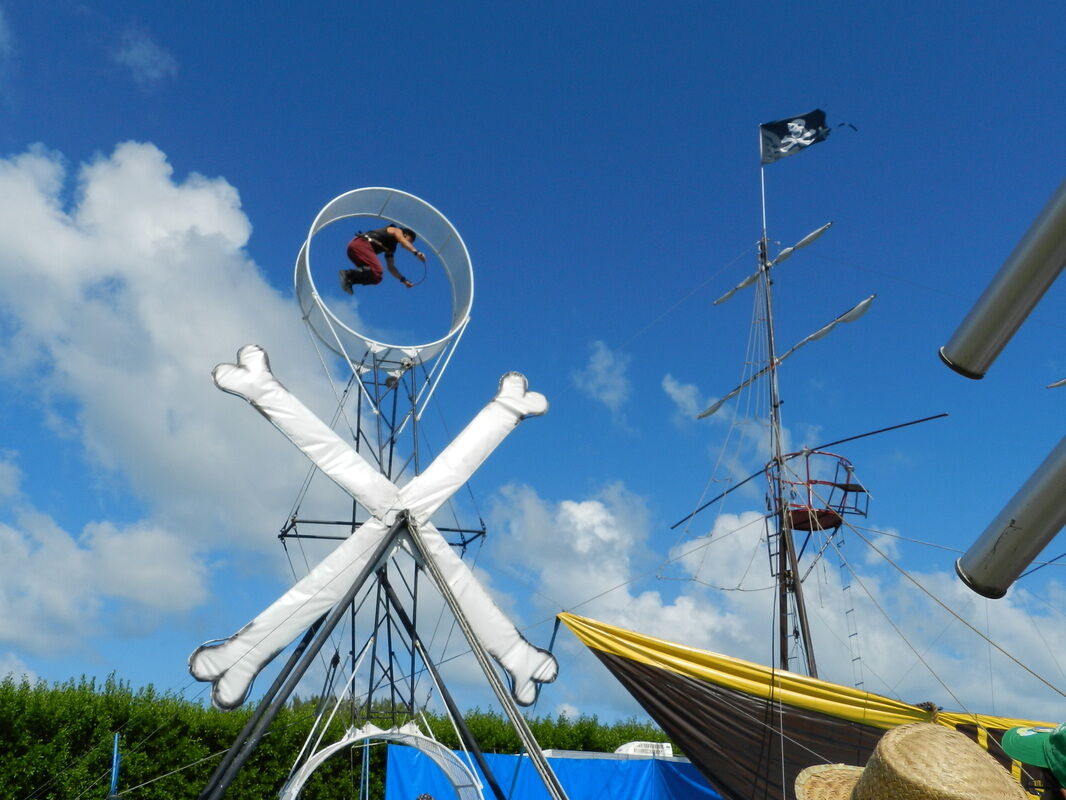 While the annual fright-fest Millers Thrillers kicked off near Spring Hill last Saturday, one of its newest spectacles - a pirate-themed high wire show - is set to debut for the first time on Friday, Oct. 9.

At around 25 minutes in length, the show will take place 20 feet in the air above a 60 foot-long pirate ship set, with performers sword fighting, jumping rope and more acrobatic stunts while balancing on a quarter inch-wide tightrope.

One of the performers in the show, 20 year-old Antony Murcia, is a 10th generation circus performer, and said he had been practicing acrobatics since as long as he can remember.

"The show is my father's creation; we're all circus performers, and we decided to go a different route and do basically a circus show but all themed as pirates," Murcia said. "I started practicing all of this when I was probably around four or five years old."

Known as the "Pirates of the Colombian Caribbean," the traveling pirate act was founded in 2008 and has performed at such venues as the Great New York State Fair, the Miami Seaquarium and the LA County Fair.

In addition to the acrobatic high wire stunts, the show also incorporates a 32 foot-tall "rotating wheel of death," and contraption that sees performers executing even more stunts inside what could best be described as giant metal hamster wheels.

The hardest stunt, Murcia said, was jumping rope atop the tightrope.

"We do basically a trick where you do jump rope like you do on the ground, but on the wire," Murcia said. "That's probably one of the hardest tricks that I've ever had to do, because you have to balance while you're moving the rope around, and jump at the same time."

Murcia said that what he believes separates the show from other similar acts is it's structure; whereas typical circus acts have ring masters and announcers, Murcia likened the pirate high wire show more to that of a film, with an uninterrupted narrative structure with the typical high and low beats.

"Once the show starts, it's basically like watching a movie," Murcia said.

"From start all the way to end, it's pure action; there's no stopping and talking, it's just pure choreography, stunts and acrobatics. This is actually a one-of-a-kind show - it's the only one in the world right now of its kind."

The Pirate High Wire Thrill Show will see two showings on both Friday and Saturday, and every weekend afterwards through October.