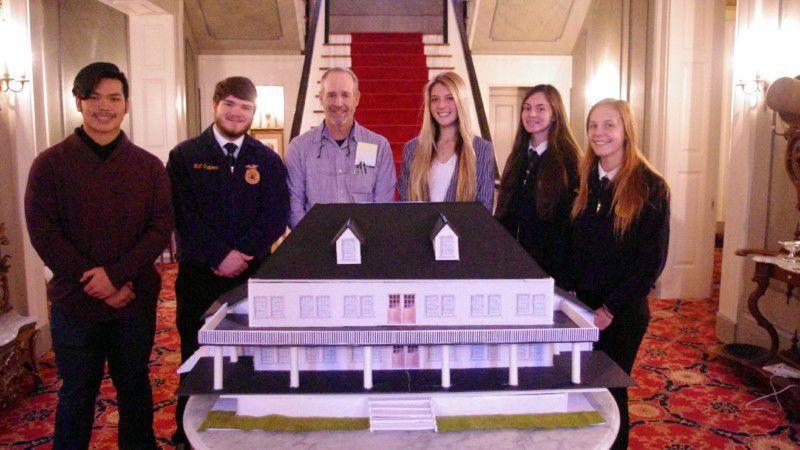 A rough design of the event center and agriculture museum shown during Monday's presentation.

Spring Hill could well be on its way to getting its first history museum dedicated to the history of Maury County, only, with a twist: this museum would be designed, built and maintained entirely by Spring Hill High School students.

Named the Maury County Museum & STEAAM Educational Center, the project has been in the planning stages for nearly four years now, and is the brainchild of Spring Hill High School teacher, County Commissioner and former Vice Mayor Gwynne Evans. During a Spring Hill city meeting on Monday, Evans and a select-few students laid out a proposed partnership with the city that would ultimately see a history museum constructed on the Rippavilla Plantation property.

“We’re working towards the big picture, which is ultimately the history museum [and the] STEAAM facility,” Evans said. “We feel like this would be really beneficial for Rippavilla, the city, and we know that we can do it, there’s already construction classes all over the country.”

As explained during Gwynne’s presentation, the history museum has four phases.

Phase one would be to transform the existing Mule Museum Barn, which sits just over half a mile east of the plantation itself, into an event center and agricultural museum. This building would be used to host events such as weddings, conferences and birthday parties, with a planned extension of the building housing the agricultural museum, which would “showcase Maury County’s rich agriculture past.”

The second phase includes the bulk of the project: to construct the Maury County museum itself.

The third phase would be to develop the STEAAM (science, technology, engineering, art, agriculture and mathematics) Educational Facility, giving students the opportunity to get hands-on experience in one of those six categories.

The fourth and final phase of the project would be to design and construct a boardwalk with “old west-style buildings,” where student-made products such as honey, eggs and more could be sold as to provide a sustainable revenue source for the maintenance of the museum.

“It generates revenue for the event center and [Agriculture] museum, it contributes to tourist attractions,” said Spring Hill High School student Gavin Williams during the presentation. “It promotes long-term goals, it proves we can accomplish short-term goals and it includes all the work-based learning in the school.”

As the project is intended to be designed and built entirely by students, Williams noted construction costs would be significantly less than were the project to be outsourced, with Evans estimating the project to cost roughly $115,000.

Evans also asked, were the city to agree to allow the project to move forward on the city-owned plantation property, if its leaders would consider waiving construction permit fees and bringing the sewer system of the property up to city standards.”

City leaders showed enthusiasm for the project at the end of the presentation, with Mayor Rick Graham in particular expressing his willingness to cooperate.

“I personally love it,” Graham said. “I think it’s great, and I think it incorporates so many facets of the community and trade schools, which we all know the governor is very big on right now.”

Evans said that optimistically, he would love to see students underway constructing the museum by January 2021.

If completed, the Maury County History Museum would be one of only two museums in the country to be designed, built and maintained entirely by students, with the first being in Scott County, Tennessee - the original inspiration for the project.