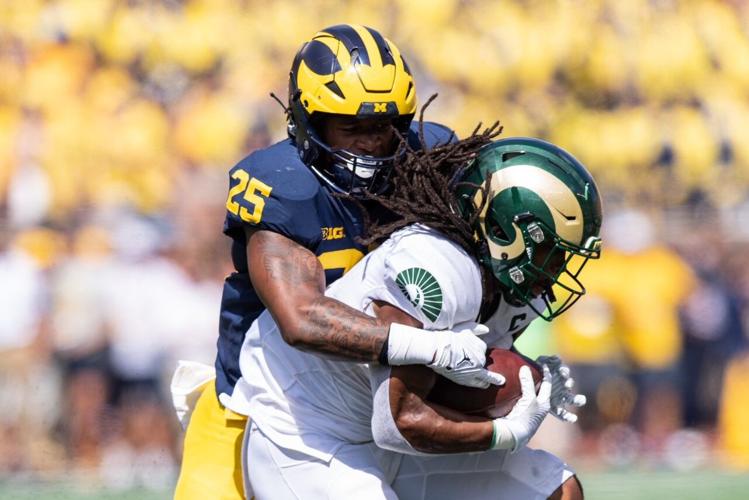 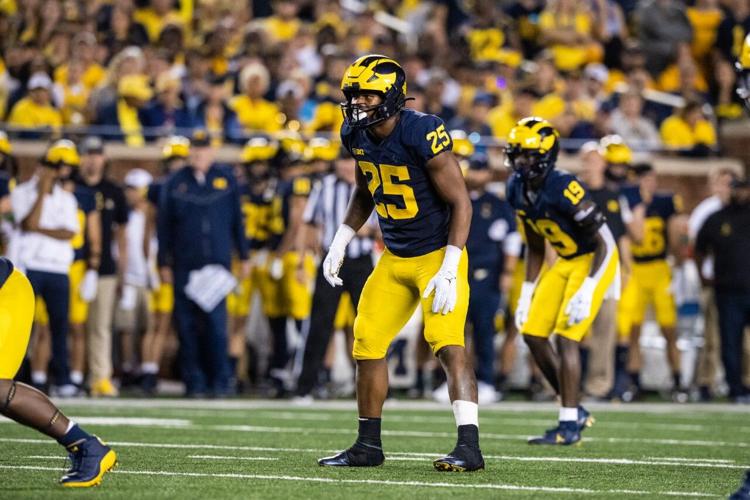 It’s hard to believe Junior Colson is only a sophomore judging by the numbers he’s putting up at Michigan this season.

The former Ravenwood linebacker leads the third-ranked Wolverines (9-0) in tackles with 61.

“Between the tackle boxes, he’s like a tackling machine,” Michigan linebackers coach George Helow told MLive.com. “Has a really good feel, has some good natural instincts. He’s a young player, so the more experience he gets, the better he plays every week.”

Colson led the Wolverines in tackles with 10 in their win over rival Michigan State two weeks ago.

Michigan boasts one of the nation’s best defenses.

“I just think it’s everybody’s tenacity,” Colson said. “We have a lot of effort to the ball.”

Running against Michigan is especially difficult.

“Everybody is winning their job and doing what they need to do to dominate the line of scrimmage,” Colson said.

Colson (6-3, 235) made an early impact at Michigan, earning freshman All-American honors last year. He recorded 12 tackles in a win at Penn State.

Colson already has 16 starts with the Wolverines.

“Yeah, it’s been a really good fit for me,” Colson said. “I fit into the scheme. They’ve helped me transition into the college atmosphere really quickly.”

That ended an eight-game losing streak in the series against the Buckeyes, who had won 15 of the previous 16.

The long-awaited win catapulted Michigan to its first Big 10 title since 2004.

Michigan is ranked third in the College Football Playoff rankings behind Georgia and Ohio State and ahead of Texas Christian. They are one of the FBS’ only undefeated teams.

The Wolverines lost their first playoff appearance to Georgia 34-11 in last year’s semifinals.

Colson is optimistic about a return to the playoffs.

“I just think we need to keep doing what we’ve been doing, to keep dominating, and I think everything else just will handle itself,” Colson said.

“Junior really has it all,” Harbaugh told the In the Trenches podcast. “He’s got a great work ethic, great attitude, all the physical skills, really smart — a guy that you know can run the defense.”

“Our defense was very dominant,” Colson said of a unit that posted four shutouts and held three other opponents to single digits.

Colson’s journey to Michigan started over 1,700 miles away in Haiti, where he was born.

His father died when he was seven, and he lived in an orphanage owned by his uncle.

Melanie and Steve Colson of Brentwood adopted him shortly after the catastrophic 2010 earthquake in Haiti that claimed an estimated 100,000 to 160,000 lives.

Junior was seven when he met the Colsons and nine when the adoption process was completed, and he arrived in Brentwood.

“When I first met him as a youngster, I never would have imagined he would play college football,” Melanie said of the small youngster whose first sport was soccer.

The family felt strongly about adoption.

Life was hard for Colson during his early years in the Western Hemisphere’s poorest country.

“I can’t imagine losing a parent and then going and living in an orphanage,” Melanie said. “That seems to me a pretty tough hand to be dealt at such a young age.”

Melanie said it’s been a blessing watching Junior grow and live his dream.

She is originally from Michigan and the family members are longtime Wolverine fans.

“We go to all of his games,” Melanie said.

The Colsons will be in Ann Arbor on Saturday when Michigan hosts once-mighty Nebraska.

“I always like it when he gets a sack or a tackle for a loss because I know those are his favorites, so that always makes me happy and feel good,” Melanie said.

Colson was a three-year starter at Ravenwood, which went 10-3 his sophomore year and 7-5 his senior year.

“Junior was just a happy young man,” said Matt Daniels, who coached him for four years before resigning in 2020. “He kind of had one of those smiles that tended to ease the tension. Junior just had this smile that helped him be a good leader and for people to be immediately drawn to.”

Colson’s magnetic smile made him very approachable with the Raptors. He was also known for his quiet confidence.

“Now, he’s being more vocal and you can see him getting opportunities to make defensive calls and changes at the highest level of college football,” said Daniels, who believes Colson has the potential to advance to the NFL after Michigan.

One moment Daniels will never forget was when he was talking with a college recruiter as they watched the Raptors in the weight room during Colson’s sophomore offseason.

“We were watching him do some squats and I don’t remember exactly what it was — it was definitely 225 pounds plus on the squat rack — and (he was) just doing it with ease and going lower than anybody else in the weight room,” Daniels said. “He’s smiling and it was like he was oblivious to how strong he was and the college recruiter was, like, who’s that?”

The recruiter’s eyes lit up and Daniels started to see the physical potential that the recruiters saw.

Colson repeatedly made "wow" plays at practice and in games, letting everybody know he was a special talent.

“Because of his combination of size and speed and lateral mobility, he can stay on the field for all four downs,” Daniels said. “He doesn’t need to be taken off the field when there’s an almost guaranteed pass scenario. He can do all of the things that are asked of a linebacker.”

Daniels said he can do well in coverage, he can blitz, and he can be stout against power-run games.

Colson played running back and wide receiver as a freshman before switching to linebacker as a sophomore. His skill set was ideal for linebacker.

“He really liked the idea of being on offense," Daniels said. "And some conversations with the coaching staff, his parents and him led us to make that switch to linebacker and, obviously, the rest is history there."