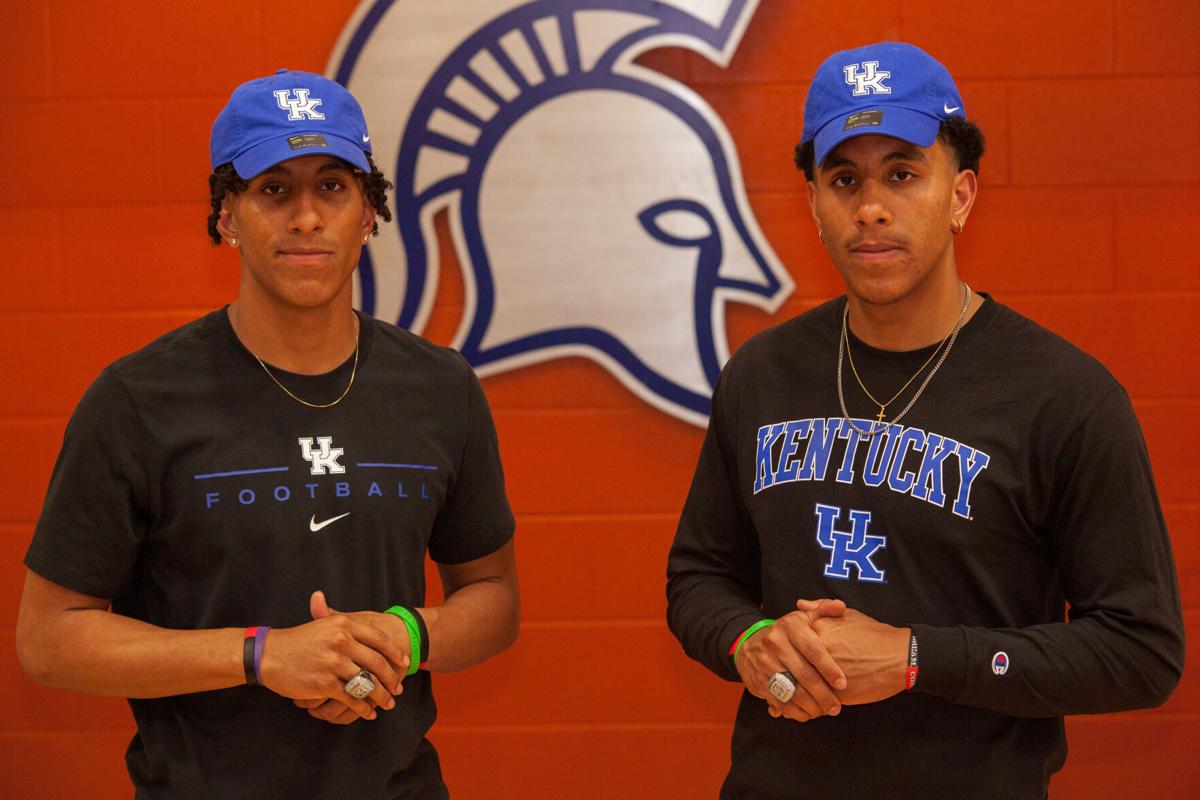 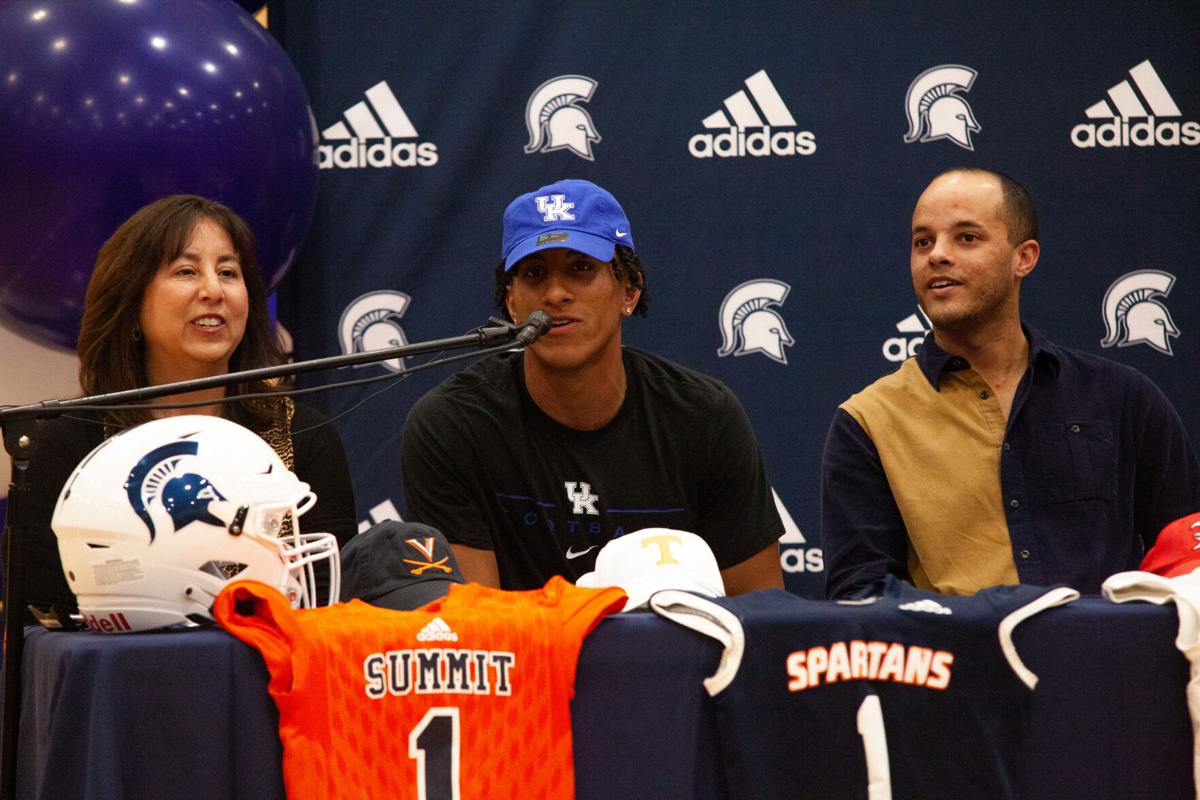 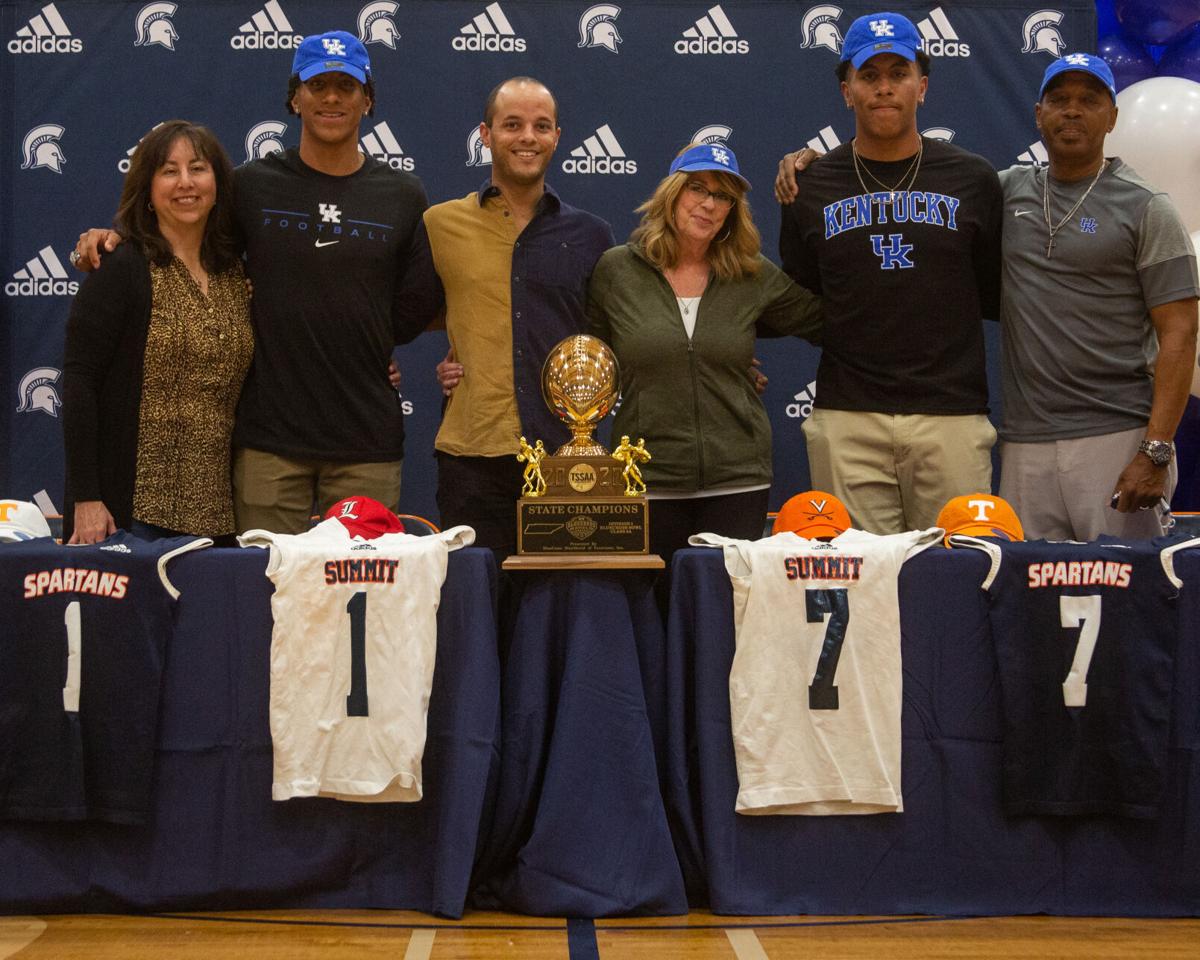 Destin and Keaten Wade were joined by family at Summit High School as they announced their future football careers at the University of Kentucky. 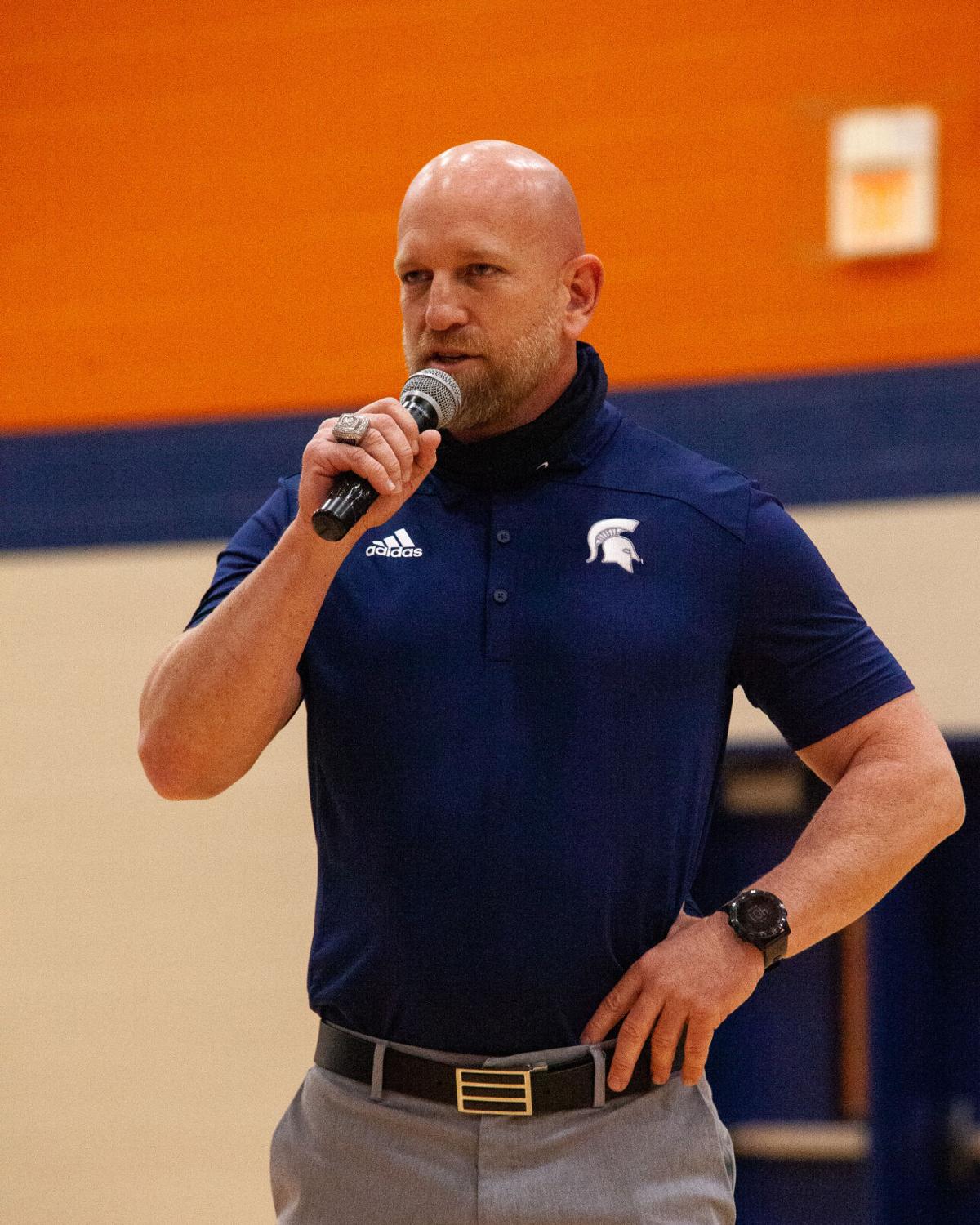 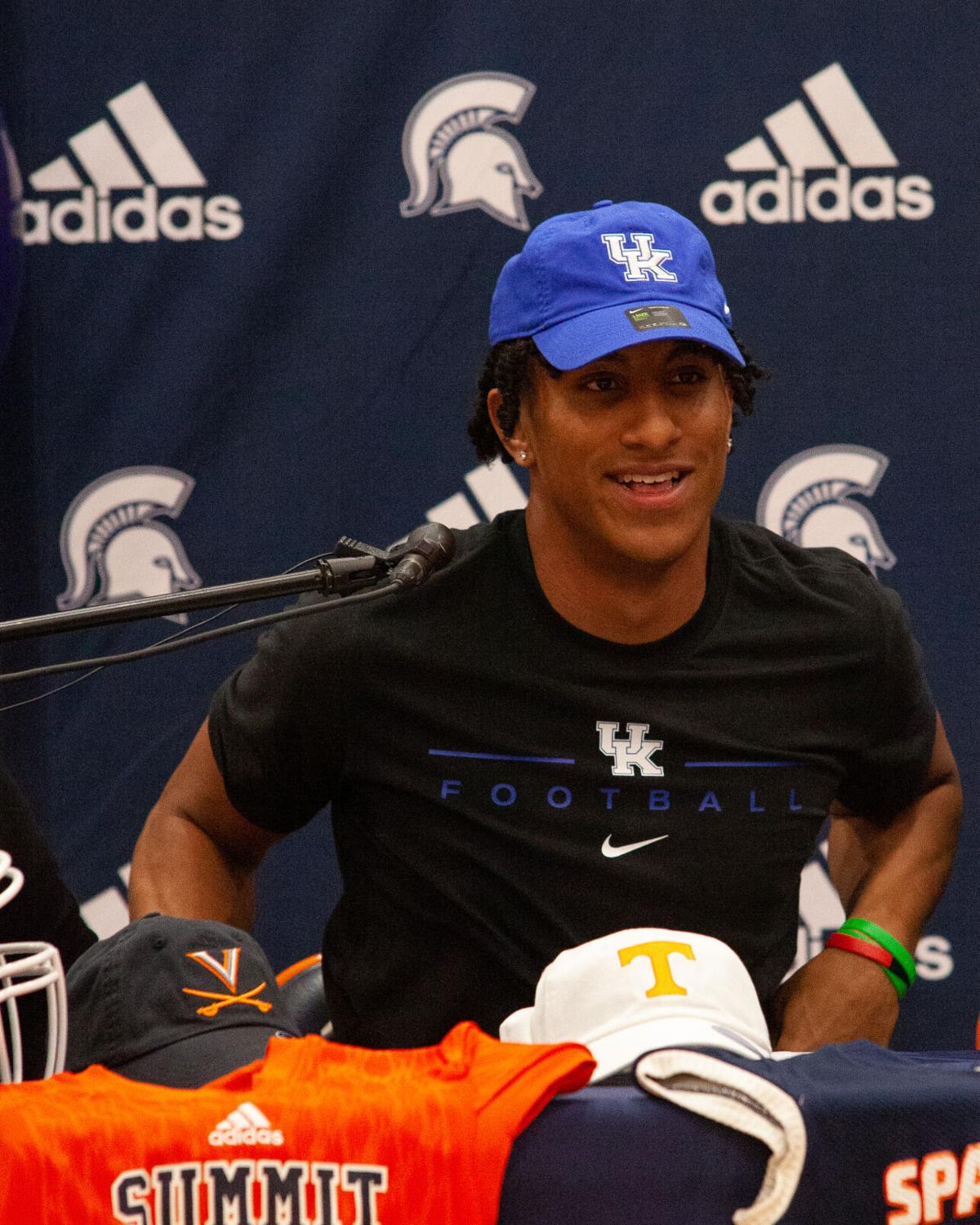 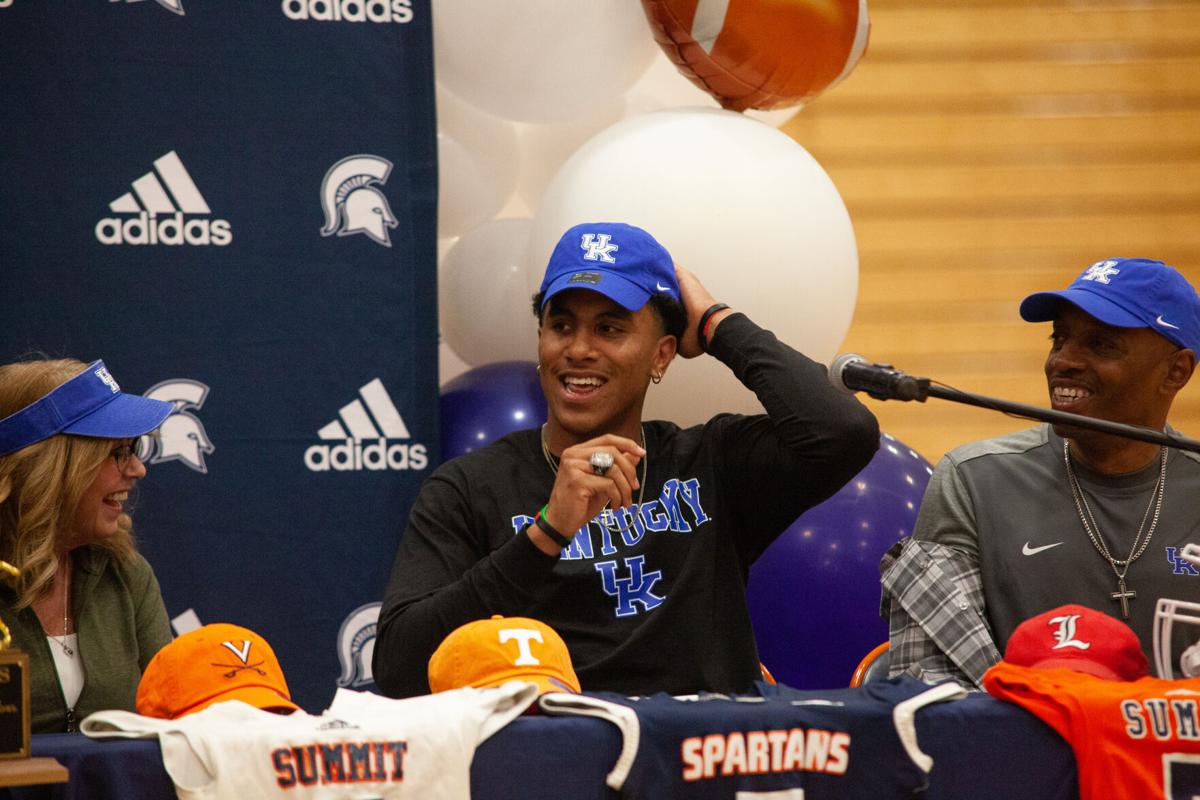 Destin and Keaten Wade were joined by family at Summit High School as they announced their future football careers at the University of Kentucky.

It's ending where it all began for Summit High School's football standouts Destin and Keaten Wade: Kentucky.

The junior twins have gotten college football offers from some of the best programs in the country. When it came time to choose, the Wades decided to stick together and shared Friday they'll be headed to the Bluegrass State to play SEC football for coach Mark Stoops and the Kentucky Wildcats.

"I liked how [Kentucky] started off early and believed in us," Keaten shared of what made the Wildcats their pick. "It's just the right fit for us overall."

"I thank God for giving me the blessings," Destin said about the process of being recruited. "The journey's been unreal, basically. It feels good to be committed to Kentucky, so I'm excited for the future. ... I always dreamed of playing college football."

For a while there, it seemed like the Wade twins were going to make their mark on the hardwood. Their combined breakout 2019 football seasons, though, earned them newfound respect on the gridiron.

"I thought I was going to play basketball at the next level," Keaten Wade said of where he thought his athletic career might go before his sophomore season. "It just turned out to be football."

In December 2019, with the Spartans on the verge of a state title appearance, Kentucky sent the Wades their first Power 5 offers. It came full circle at Friday's signing ceremony in Summit's gym when the Wade twins donned blue hats, rather than orange. Some thought the recruits might end up in-state at Tennessee with new coach Josh Heupel.

Louisville and Virginia were the other finalists.

Keaten Wade is a four-star outside linebacker, per 247Sports, and is the fourth-best prospect for Tennessee for the class of 2022. He's the 16th-best outside linebacker and the 188th-best recruit in the country overall for 2022, per 247.

At Kentucky, Keaten will follow in the footsteps of pass rushers like Josh Allen, Bud Dupree and Za'Darius Smith, who both went pro after careers as Wildcats. He's the school's only outside linebacker in its 2022 recruiting class so far.

"It's awesome that I'm going to be coached by the best," Keaten Wade said, mentioning Wildcats defensive coordinator and outside linebackers coach Brad White as someone he's excited to play for. "I know that I'll be in good hands, and [I'm going to] just trust them and make it to the next level [the NFL]."

He also had offers from top-flight programs like LSU, Oklahoma and Michigan before choosing Kentucky.

Keaten missed a bulk of 2020 with a foot injury but played in the team's 5A state championship win over Oak Ridge last December. The 6'4" OLB played in just three games total last season but registered six tackles, four tackles for loss and three sacks.

Destin Wade, 5A Mr. Football finalist, exploded in his junior season. The 6'3" quarterback completed 81 of 129 passes for 1,390 yards and 19 touchdowns against five interceptions. He also ran for 1,509 yards and another 18 touchdowns.

Per 247Sports, the four-star athlete is the 13th-best prospect for Tennessee in 2022 and the 26th-best athlete in the nation overall for 2022.

Destin confirmed Friday that Kentucky intends for him to play quarterback for the school, despite his status as "athlete" in recruiting.

"This is the SEC, and basically, they've been recruiting us ever since we got offers," Destin said about why Kentucky was the choice. "Just me having the opportunity to play quarterback there is amazing."

Summit coach Brian Coleman has been with the Wade twins since they were freshmen.

"They deserve it," Coleman said of his two star Spartans. "They work their tails off, and they're great kids. Throughout the whole process, if a college coach called, it was very easy for us to tell all the positives about them. You don't have to hide a single thing.

The Wade twins are the most prominent football players to come out of the school thus far, adding to Summit's recent successes.

"It's big for the program, and it speaks volumes for this school, how it's come along, for sure," Coleman said of the Wades heading to the SEC.

"So, if you're at this school, you can say, 'yeah, I can be there one day, too, if I just do the right things.' And, I know [the Wade twins] are gifted, but [there are] a lot of kids who are gifted just like they are."

It's been quite a few months for the Spartans coach, who saw his team win the school's first title last year and now sees two SEC football recruits on his list of players he's coached, two players he says he's quite proud of.

"As a coach, it's a dream come true," Coleman said. "If you write down that there are certain things you want to accomplish, you want to win a state championship, you want to do it with great kids, you want your kids to be successful. I mean, you're checking off all the boxes right there."

Before heading a state up, the Wades will help the Spartans attempt another state title run this fall, this time in Class 6A. They'll play in newly formed Region 7-6A that features WillCo heavyweights like Brentwood, Ravenwood, Independence, Franklin and Centennial.